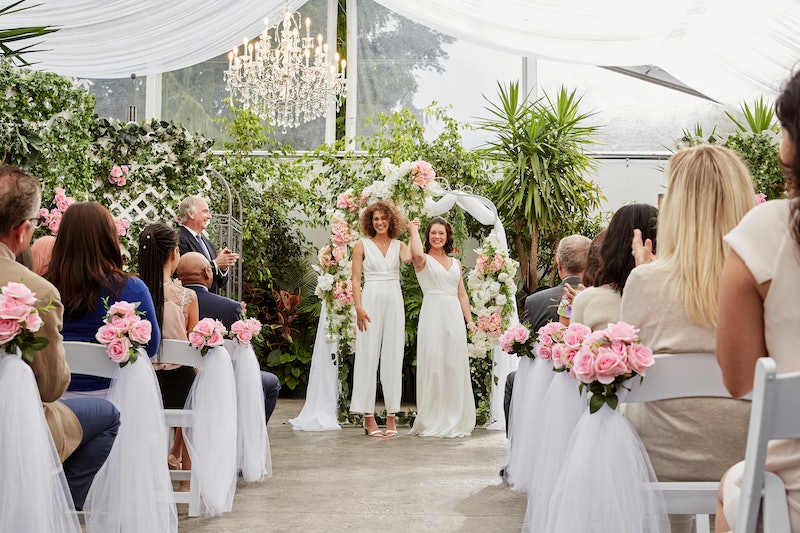 In a moment that made history for the cable channel, Hallmark Channel aired its first LGBTQ+ wedding as part of the new movie, Wedding Every Weekend, which debuted on Saturday, Aug. 15. This is certainly a step forward for the network regarding inclusivity and representation for the LGBTQ+ community, especially based on backlash Hallmark's received just last December for pulling several ads featuring a lesbian couple kissing at their wedding.

As for Wedding Every Weekend, the made-for-TV movie tells the story of Brooke (Kimberley Sustad) and Nate (Paul Campbell), who each attend the same four weddings over the course of four weekends. As a way to avoid being set up at the weddings, they go together as "wedding buddies." And, yep, romance blooms. But, more importantly, one of the weddings they attend is for Vicky (Carmel Amit) and Amanda (Makayla Moore). Their wedding isn't the main story, but showing a lesbian couple getting married and kissing on Hallmark is progress.

Hallmark has previously featured LGBTQ characters and couples in supporting roles, as reported by Entertainment Tonight, but this is the first time an LGBTQ+ wedding has been incorporated. "It really reflects the world that we live in now," Moore said in a behind-the-scenes video for the movie. "It's exciting to celebrate love in all its forms." Campbell also recognized that the movie "is acknowledging the fact that love is love."

Of course, Amanda and Vicky's story received criticism from some on social media, but as Hallmark tweeted on Aug. 10, "We are proud of our movie, Wedding Every Weekend. Our priority at Hallmark Channel is to develop a broad mix of content, characters and stories in order to create a Hallmark experience where everyone feels welcome."

Well, it seems like network accomplished just that, because several viewers shared positive thoughts about the movie including a LGBTQ+ wedding. Twitter user @wonderlust71 posted while watching the movie, "Thank you @hallmarkchannel I hope this is just the beginning!! Next step? Main story! I’ve been a fan for a long time. As a lesbian I never dreamed I would see this." Alongside a photo of Vicky and Amanda kissing, @cmedders tweeted, "It wasn’t the main storyline but @hallmarkchannel finally made this happen and it was beautiful!!" Twitter user @cleekers expressed their excitement as well and tweeted in all capital letters, "I NEVER DREAMED I WOULD EVER SEE THIS IN A HALLMARK MOVIE!!!!! THANK YOU!!!! MORE PLEASE!!!" Many people watching and live-tweeting also used the hashtag "#loveislove."

Following the understood criticism Hallmark received in December, the network vowed to do better. "Diversity and inclusion is a top priority for us and we look forward to making some exciting programming announcements in the coming months, including announcements about projects featuring LGBTQ+ storylines, characters, and actors," a Hallmark Channel spokesperson told ET in July. While an LGBTQ+ couple being celebrated by showing their wedding is a big step for Hallmark, let's hope it's not the only step the channel takes to make its content more inclusive. Fingers crossed they go bigger next time, like with a main storyline revolving around an LGBTQ+ couple.

For those who'd like to check out Wedding Every Weekend, the movie has several encores, including: Sunday, Aug. 16 at 7 p.m. EST, Tuesday, Aug. 18 at 8 p.m. EST, Saturday, Aug. 22 at 5 p.m. EST, and Sunday Aug. 23 at 1 p.m. EST. The movie can also be streamed via the Hallmark Movies Everywhere app with valid cable or satellite login information.