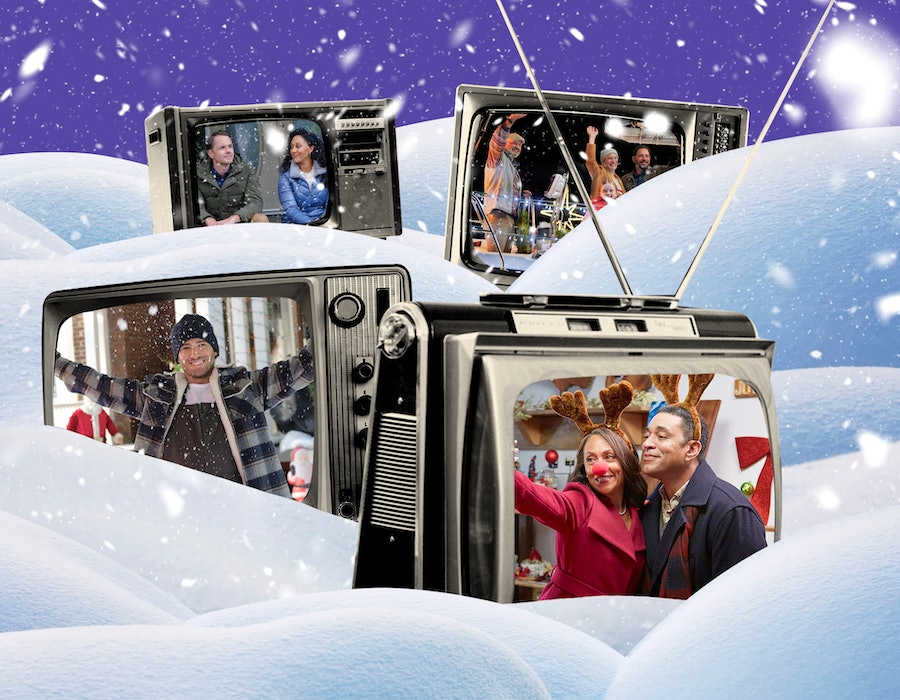 For the Hallmark Channel, Christmas starts in October, when it begins rolling out its dozens of holiday movies in earnest. Each one is a variation on a theme the channel has spent nearly two decades perfecting: City girl meets small-town boy, engages in mistletoe and snow-laden antics, and lives happily ever after. It’s a formula so beloved that fans flock to Hallmark’s three-day extravaganza known as ChristmasCon; figures from Nielsen MRI Fusion from November 2021 showed that more primetime viewers tuned in to the Hallmark Channel on Election Night than CNN. It’s not just those watching at home who are fanatics, either: Actors who feature on the channel have credited it with making their careers, and in the case of beloved Hallmark leading man Cameron Mathison, for literally saving his life.

Yet in the shadow of Hallmark’s staggering Christmastime domination, it’s easy to forget that it wasn’t always this way. Back in the early 2000s, the Christmas TV Movie Industrial Complex was not yet ascendant. The Hallmark Channel wouldn’t exist until 2001, and Lifetime had a much more meager holiday offering of its own. Popular Christmas movies — family comedies like Home Alone or How The Grinch Stole Christmas and romances like Love Actually and The Holiday — were made by big studios and released in theaters. TV was simply not the destination for holiday films. Then came The Christmas Card.

The script for the Hallmark Channel’s first major Christmas movie was completed in 1999, two years before the network was operational. The film follows a young soldier who gets an anonymous Christmas card from a woman in California and sets out to find her when he returns from war. Writing on spec, Joany Kane dreamt up elements that would become synonymous with Hallmark’s movies, like the quaint small-town setting and a whirlwind romance between two people who find love against the odds. (She also notably fell in love with her now-husband — a real-life logger! — in the research process). Kane’s work found its way to the Hallmark powers that be, and in 2006, The Christmas Card premiered on the network.

It was an immediate hit. The Christmas Card broke all-time ratings records when it aired, and maintained them for nearly a decade. Ed Asner got an Emmy nomination for his role. The movie even increased tourism in Nevada City, California, where the film is set, so much that the city began holding an honorary event on May 19: Joany Kane Day. “Every year I still get hundreds of messages and cards about the movie,” Kane tells Bustle. “Someone told me their mom was dying of cancer and she wanted to spend her last minutes watching the movie because it was her favorite movie.”

In the years following the debut of The Christmas Card, CEO and President of Crown Media Family Networks Bill Abbott transformed Hallmark into a Christmas movie-making machine. The secret? A family-friendly formula that’s so precise and G-rated that The Christmas Card probably wouldn’t get made today (it mentions war and has a male character as its protagonist, two no-no’s). And yes, those are really no-no’s. The network has always had a strict set of unspoken rules that ensure every Hallmark film is lighthearted and safe for the whole family, according to the writers who pen the scripts.

“It has to feel good, it has to be uplifting, it has to take you to a magical place, it has to make you feel safe.”

“‘No snow, no go. Clink clink, don’t drink. If I’m not crying, I’m not buying.’ Those were all rules I heard,” says author and screenwriter Karen Schaler, who has written Christmas films for both Hallmark and Netflix (most notably the internet’s favorite holiday punching bag, A Christmas Prince). Before greenlighting a project, Hallmark executives will comb through scripts to ensure there’s nothing unseemly: no heavy drinking or acting drunk, no drugs, no full-frontal nudity or explicit sex, no swearing, no fighting, and no actual conflict between characters. Divorce is discouraged; widowhood is preferred if a partner has to be dispensed of. “You’re not going to see those things in a Christmas movie, and I don’t know who would want to watch those things. I wouldn’t,” Schaler says. “It has to feel good, it has to be uplifting, it has to take you to a magical place, it has to make you feel safe.”

A Hallmark Christmas film is meant to feel like a warm peppermint hot chocolate for the soul; you don’t throw on A Very Merry Mix-Up or Once Upon a Christmas Miracle to be shocked, horrified, or emotionally devastated. The tried-and-true formula, which many former Hallmark writers tell Bustle is their go-to framework for crafting a story for the channel, begins with a certain type of protagonist — usually, a beautiful career woman with a heart of gold — meeting a nice man. Around the 18-minute mark (the first commercial break), there is an almost-kiss. By the halfway point, there’s a Christmas-related debacle. By the end, the couple ends up under the mistletoe or near a Christmas tree, and they share one tender kiss before living happily ever after.

While it might seem redundant for every Christmas film to follow this formula, don’t knock it ‘til you try it. At least, that’s what streaming giants like Netflix and Hulu seem to think when it comes to their own slates of holiday movies — watch them closely, you’ll see many co-opt Hallmark’s winning approach. Because it works.

“We all know how the movie ends,” says Kane. “What makes these movies magic is the journey they take us on. The reason for the enormous popularity of these movies is that the fans of these movies want to feel: They want to feel love, to feel hope, to feel joy ... Christmas lends itself beautifully to this experience because this is the time of year where we have the most hope, the most anticipation for something wonderful coming.”

Ron Oliver, a director and writer with nearly a decade of Hallmark experience under his belt including movies like The Christmas Train and The Housewives of the North Pole, agrees that the holiday season lends itself particularly well to emotional moments. “There has to be Christmas in every scene, in every frame,” he says. “I do Christmas movies and horror movies, and they’re similar in that they take place in a heightened emotional state. In a horror movie you’re running for your life... in a Christmas movie you’re running to [decorate] the tree.”

Given that the contours of the plot are always the same, it would be understandable if Hallmark eventually ran out of ideas for new movies. But year after year, the network continues to pump out dozens of Christmas films, each with a unique spin on romantic holiday cheer. They have their own quirky ways of making this happen. “My first internship in LA was working for a production company that produced Hallmark movies. Many Hallmark films were birthed by producers sitting in a conference room, spitballing catchy movie titles, and then working backward to shape a plotline around the title,” says an industry source who asked to remain anonymous. “If they came up with a title they liked — say Christmas on the Rocks, for example — they’d send me to surf the web for a family who rock climbs every Christmas, or a rockstar who falls in love with a caroler. Anything. It was like writing a punchline before a joke — certainly not organic, but it got them where they needed to go.”

Oliver’s 2019 film Christmas at the Plaza was a Facebook post before it became a film. After posting a picture of himself drinking a glass of champagne at the bar of the Plaza Hotel with the caption, “Doing research for my next film,” a Hallmark executive reached out and told him if he could lock down the Plaza for filming, they would make the movie. It took the team a couple of months to go from a Facebook post, to a movie with a script, to a full-on production that would complete filming and be ready to air for that year's Christmas season. “My sleeping schedule still has not recovered from all those night shoots,” Oliver says of the days spent shooting in New York with actors bundled up for winter amid sweltering summer weather. “But it was worth it. I love Christmas. I’m a Christmas fanatic.”

But the network fans know and love is in the midst of a cultural shift. The characters featured in Hallmark films have always been overwhelmingly white, cis, straight, and vaguely Christian, but this conservative approach is getting a shakeup. Under new leadership, Hallmark recently debuted its first Hanukkah movies and even showcased a queer storyline, among other efforts to increase diversity in its programming. “Hallmark has expanded the definition of family for themselves to show that family looks like a lot of things,” says Oliver. According to Michelle Vicary, EVP of programming for Crown Media Family Networks, 25% of Hallmark’s original movies in 2020 featured diversity in some way, which is a vast improvement from previous years. There was even a movie released last year that showed a woman taking a large sip of red wine — scandalous!

But even if the Crown Media Family Networks recipe is tweaked, the original formulation isn’t going anywhere. Those who create the movies know the value of a good old fashioned holiday romance better than anyone. “Before I was writing Christmas movies, I was covering crime and reporting from war zones in Bosnia and Afghanistan as a hard news journalist,” Schaler says. “It was a really difficult time. I escaped into Christmas movies... then I wrote one. A lot of Hallmark writers have used these movies as an escape from other jobs or lives.”

More like this
Here’s Everything Coming To & Leaving Netflix In February
By Jake Viswanath
Pamela Anderson’s Dating & Marriage History Could Be Its Own TV Series
By Jake Viswanath
At 28, Rosie Perez Risked Her Career To Stop Playing Stereotypes
By Gabrielle Bondi
Rupert Grint Just Shared A *Major* Update About Ron Weasley’s Future
By El Hunt
Get Even More From Bustle — Sign Up For The Newsletter
From hair trends to relationship advice, our daily newsletter has everything you need to sound like a person who’s on TikTok, even if you aren’t.