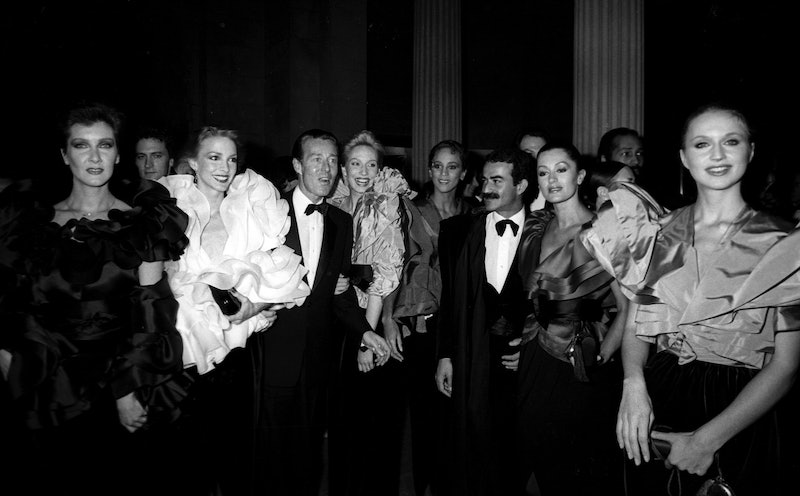 Halston only had one great love in his life, and it was with Victor Hugo (no, not the French novelist).

The pair’s relationship is revisited in Netflix’s Halston, a sweeping portrait of the mononymous fashion designer’s epic rise and fall. Indeed, the real Halston had a tempestuous 12-year relationship with Victor Hugo, a Venezuelan-born American stylist and artist, after meeting him through the callboy service Dial-A-Dick. Soon Hugo was creating window displays for the designer, a position he usurped from Halston’s former partner Ed Austin. Hugo also spent time designing displays for Andy Warhol’s Factory.

It’s been said that this relationship contributed to the fashion mogul’s decline and hard drug use. “Halston's money and Hugo's appetite for excess made the pair an accident waiting to happen,” according to Telegraph.

Below, what’s known about Halston and Hugo’s relationship.

They met one night when Halston hired a callboy.

Before Grindr and Scruff, and even before Craigslist, you had to phone a callboy service. Halston called Dial-A-Dick and Hugo showed up to his door (the name Hugo was supposedly pronounced “huge-o” because of Hugo’s large … you know). Halston was in a relationship with Austin at the time, but this chance meeting changed Halston’s life forever. The designer’s entanglement with Hugo is often called his “greatest love affair.”

Halston first hired Hugo to work behind the scenes — but it didn’t take long for him to find a more creative role. This put Hugo at odds with Ed Austin, Halston’s onetime partner, who was managing Halston’s store and its window displays at the time. “We had a big fight about the Christmas window,” Austin says in an excerpt from Simply Halston published by Vanity Fair. “I put in the window about a week before Christmas. It was fabulous, nothing but red clothing and silver jewelry. But Halston came downstairs with Victor Hugo, and he didn’t like it. Halston had Victor redecorate it.” When Austin returned to work the next Monday — on Christmas Eve — Halston fired him.

As Andy Warhol recounted in his 1980 photo book Exposures, per Interview, Halston “gave [Hugo] a job doing windows. Soon Halston had a theatre on the street. His Madison Avenue windows were filled with pregnant mannequins, suicidal mannequins, and mannequins reading my magazine Interview.”

Those close to Halston had… opinions about their relationship.

Though Halston was deeply in love with Hugo, those in the designer’s circle weren’t as enamored. Some argue that Halston’s downfall started the day they met. According to Pat Cleveland, Hugo was “a bad boy who got into a lot of trouble,” and was generally viewed as a distraction and impediment to Halston’s career.

Many also viewed their relationship as one-sided, with Hugo taking advantage of Halston. Peruchio Valls, a friend of Hugo’s, told Vanity Fair in 2014 that “the person that Halston loved, more than his own life, was Victor.” Steven Gaines, who wrote the 1991 biography Simply Halston: The Untold Story (the source material for the Halston miniseries), said in an interview with NewNowNext that “Halston had [Hugo] sign a non-disclosure — and he paid him for it — but he broke it. Victor also ended up being ill and had no respect for anything. He thought he was untouchable.”

Toward the end of Halston’s life, things only got more intense between Halston and Hugo. According to Gaines, Victor would steal Halston’s belongings as he was dying. This was already after they’d parted ways, but Hugo felt entitled to property he felt was shared. When Halston moved to San Francisco in 1988, he “mostly tried to keep [Hugo] out of his life,” the designer’s niece, Lesley Frowick, told People. “He tolerated him, but he was trouble.” Halston and Hugo died on different coasts, three years apart.