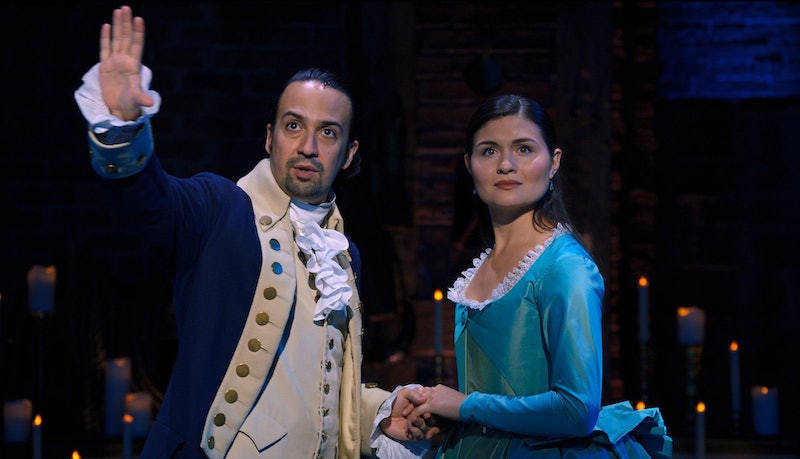 Hamilton fans have been helpless when it comes to decoding the Broadway show’s ending, but star Phillipa Soo just confirmed a major Eliza Hamilton theory about the gasp. Yes, the gasp. The arrival of Lin-Manuel Miranda’s musical about Alexander Hamilton on Disney+ this month has reignited the discourse around Eliza’s gasp at the very end of the show. What does it mean? Who does she see? Did she forget to unplug her 17th-century curling iron?

Now, fans finally have an answer, at least from Soo's point of view. In an interview with SiriusXM's The Jess Cagle Show on July 29, the actor, who originated the role, confirmed that the theory about Eliza breaking the fourth wall — that is, looking out into the audience and feeling awe that her husband’s story has been told — is correct.

After first asking Cagle and co-host Julia Cunningham about their own interpretations of the gasp, Soo confirmed that the theory about breaking the fourth wall was correct — saying that Eliza could "look out and see all these beautiful faces and acknowledge that story we had all taken a ride to witness."

Soo also maintained that she wouldn’t be able to detail what she “was thinking precisely in that moment" in 2016 when the show was filmed, but she agreed with the interpretation regardless. “Night to night, it was different,” Soo said. “But yes, the character of Eliza sees Hamilton or sees that legacy or sees that orphanage,” or “sees her kids telling her story.” She explained, “It was an exploration for me everyday, because you do a show eight times a week for a year and you find new things every single time."

Of course, after Soo’s departure from the show in 2016, the subsequent Elizas have given their own interpretations of the moment. Director Thomas Kail first teased the origins of the gasp in a July 11 interview with the Los Angeles Times, explaining that Soo’s gasp evolved many times throughout the various shows — and that while there was, in fact, “an answer” behind it, “I don’t know that I’m really keen to share it,” Kail said. "[Soo] is the holder of that flame and if she wants to share that, I support her.”

Now that Soo has confirmed the theory, Hamilton fans can finally be satisfied.

More like this
Pamela Anderson’s Dating & Marriage History Could Be Its Own TV Series
By Jake Viswanath
Here’s Everything Coming To & Leaving Netflix In February
By Jake Viswanath
You’ll Definitely Recognise Isadóra Bjarkardóttir Barney’s Mum
By Maxine Harrison
Lisa Marie Presley's Secret Granddaughter Was Revealed At Her Funeral Out Of Nowhere
By Jake Viswanath
Get Even More From Bustle — Sign Up For The Newsletter
From hair trends to relationship advice, our daily newsletter has everything you need to sound like a person who’s on TikTok, even if you aren’t.