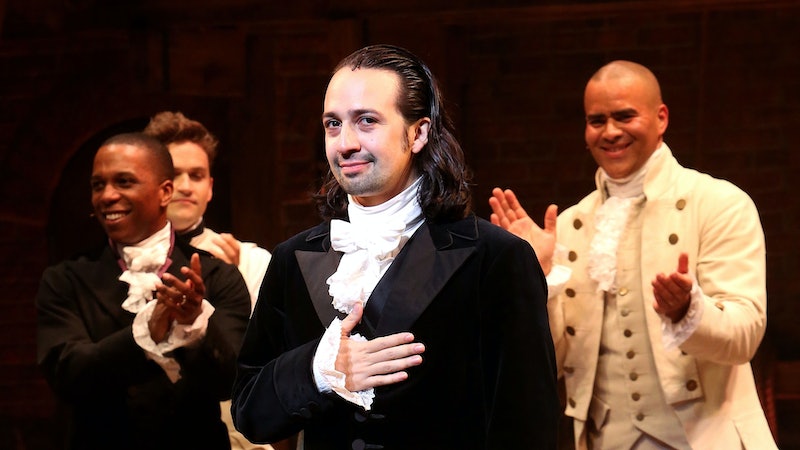 Hamilton fans, it's time to rise up — the Tony, Grammy and Pulitzer-award winning musical is finally available to stream, and theater fans everywhere are already dissecting the movie spot all of the Hamilton Easter eggs on Disney+. The "live-capture" version of the hit Broadway musical was filmed at the Richard Rogers Theater over the course of three nights back in 2016, with the original Broadway cast, including writer and composer Lin-Manuel Miranda in the titular role.

The film was originally scheduled for a theatrical premiere in October 2021, but due to the ongoing coronavirus pandemic, Disney announced in May that they had decided to make it available to stream early. "I’m so proud of how beautifully [director] Tommy Kail has brought ‘Hamilton’ to the screen. He’s given everyone who watches this film the best seat in the house," Miranda said in a press release at the time. In the process, the Hamilton team has managed to make the experience immersive enough for those who haven't yet had the chance to see the show on stage, while also packing in plenty of small nods to those who have seen the show — or who just happen to be Hamilton obsessives.

From character beats impossible to pick up on the cast recording to the show's Marvel-style ending credits, here are all of the Hamilton Easter eggs that fans are currently obsessing over.

At the start of every Broadway show, there is a courtesy announcement asking the audience to turn off their phones and to remind them not to take photos of videos of the show. At Hamilton, that announcement is done by the actor playing King George III — in this case, Jonathan Groff — who also welcomes everyone to "my show," despite being only a minor character in the show. Disney+ includes this small moment at the very start, in order to give fans at home that same experiences, and to make it feel even more like you're sitting in the theater.

The "Rewind" In "Satisfied"

Angelica's show-stopping number, "Satisfied," begins at the wedding of her sister, Eliza, to Alexander Hamilton, before "rewinding" back to the moment that she met the future Founding Father at a ball. The music drops out to offer a new mix, with small samples from both "Helpless" and "Satisfied," and all of the actors onstage literally rewind the scene in order to reset at the ball where the Schuyler Sisters met Hamilton, telling the story once again from Angelica's point of view.

Though he has his moments of bombast in the cast recording, the character of Hercules Mulligan — as played by Okieriete Onaodowan — in the original Broadway cast is a much more memorable character onstage. The character (literally) leaps into Hamilton's friend group, and from there, Onadowan gives the character some of the first act's most hilarious moments, whether he's crudely taunting Hamilton and Burr about their love lives or serving as an awkward flower girl at Hamilton and Eliza's wedding.

King George In The "Reynolds Pamphlet"

"The Reynolds Pamphlet" takes place after Hamilton publicly reveals his affair with Maria Jefferson in a newspaper; in response, his political rivals Thomas Jefferson and James Madison celebrate that he's "never gonna be president now" that this has been revealed. And while he can't be heard on the cast recording, onstage, King George III also joins in that scene, delightfully celebrating that the colonies that rebelled against him appear to be in turmoil.

In order to make Hamilton appropriate for Disney+'s family-friendly audience, Miranda revealed on Twitter that he had to cut two of the three f-words that are uttered during the show. While they're clearly audible on the cast recording, Miranda pointed out exactly where the lyrics have been changed in order to get Hamilton down to a PG-13 rating. Although, as he noted, anyone who misses the original lyrics can sync up the cast recording with the movie, in order to get the full experience.

In addition to the Broadway musical, the cast recording and a giant book all about the making of the musical phenomenon, Miranda also produced an album called The Hamilton Mixtape, which featured various artists covering and reinterpreting the musical's iconic songs. For the movie's credits, the team paid homage to that project by The Root's version of "My Shot" — which features verses from Busta Rhymes and Joell Ortiz — to soundtrack the credits. At the very end of the credits, they cap things off with the flourish that the orchestra performs after the cast bows, as the audience is leaving the theater. In other words, thanks to all of those tiny moments, Hamilton is truly a complete, immersive experience, from the comfort of your home.

More like this
Anne Hathaway Shared A "Thrilling" 'Princess Diaries 3' Update
By Darshita Goyal
'Friends' Star Maggie Wheeler Offers Support To Matthew Perry After Reading His Memoir
By Alyssa Lapid
The 'Scream 6' Trailer Shows Off Hayden Panettiere's Return & Ghostface In NYC
By Jack Irvin and Jake Viswanath
Beyoncé & Blue Ivy Performed A "Brown Skin Girl" Duet At Her Private Dubai Concert
By Brad Witter
Get Even More From Bustle — Sign Up For The Newsletter
From hair trends to relationship advice, our daily newsletter has everything you need to sound like a person who’s on TikTok, even if you aren’t.