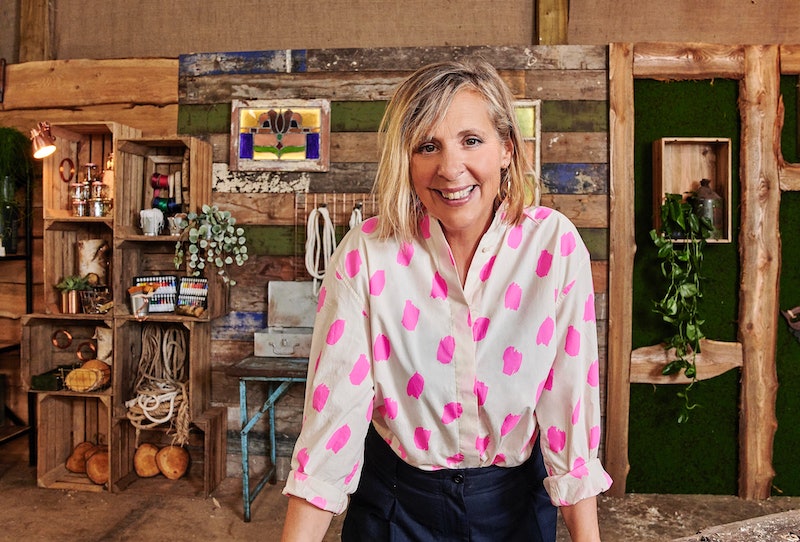 As this year’s Great British Bake Off airs on Channel 4, loyal fans of the show still hold a special place in their heart for the dynamic ex-hosts Mel and Sue. And, those fans will be pleased to know that Mel Giedroyc will soon be back on TV with a series that could be described as the woodwork equivalent of GBBO.

Presenting a new competition that showcases a niche skillset, Giedroyc will be hosting Channel 4’s Handmade: Britain’s Best Woodworker. Alongside judges Helen Welch and Alex de Rijke, this series fits the wholesome reality show brief to a tee. Here’s everything you need to know.

The official air date of Handmade: Britain’s Best Woodworker is Thursday, October 21, at 8 p.m. Each new episode of the six-part series will hit Channel 4 at the same time each week, and it will also be available to stream on All 4.

What Is Handmade: Britain’s Best Woodworker About?

As the title suggests, the new show will follow nine woodworkers, competing against each other to win the coveted title of “Britain’s Best Woodworker”. Throughout the series, the woodworkers will create a ‘Big Build’ project, aiming to wow the judges with their designs.

They will also have the chance to showcase a particular talent in a ‘Skills Test’, where their specialist expertise will come into play. Each week, contestants will be sent home, with the winner revealed in the final episode.

Speaking to What To Watch, Giedroyc said: “I just loved the whole idea of it, and said yes straight away! I love the idea of bringing a craft to telly that maybe hasn't really ever been seen in this way before, and the show just felt very different.”

Comedian Mel Giedroyc will guide viewers through each week, bringing back the wit and charm that viewers loved from her Bake Off days. Speaking to Radio Times, Giedroyc said the show was “like a marathon, and the woodworkers have got such grit.”

On the need for a series like this, she continued: “When times are strange and difficult, which they are, people need comforting, reassuring things, nostalgic things maybe, and I think this falls into that category.”

The award-winning architect, Alex de Rijke, and furniture maker, Helen Welsh, will join Giedroyc each week, with the task of judging the contestants builds.

Everything Else You Need To Know

Although the first ‘Big Build’ is tipped to be a bed, this show is not one to snooze on. Filmed in beautiful woodland in Wales, Giedroyc quarantined alongside the 60-strong cast and crew while filming. She described the experience as “surreal”.

To sum up, in Giedroyc words, Handmade: Britain’s Best Woodworker “just had the vibe, the vibe was strong!”