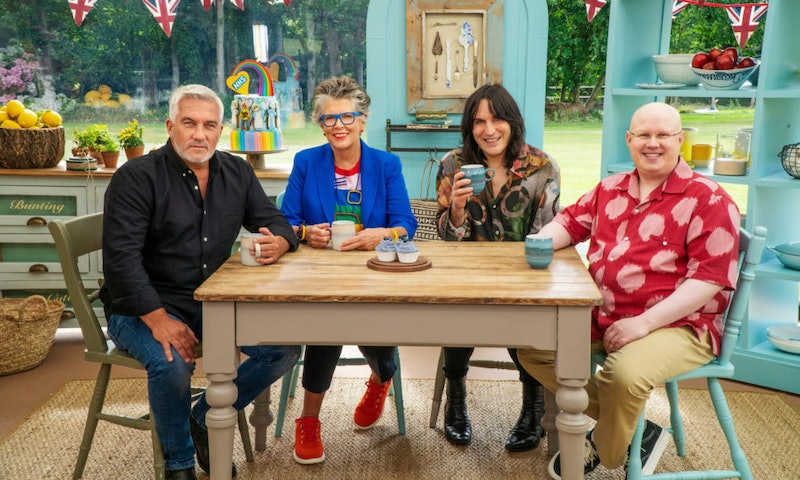 Fire up those ovens and start greasing your pans — The Great British Bake Off is back on Sept. 21 for season 12. Yes, that’s 12 seasons of soggy bottoms, melting chocolate sculptures, and Paul Hollywood’s icy gaze piercing into your soul. The series has managed to maintain some mystery over the years (who eats all of those ice buns?) however you may still be wondering: what is the prize for winning The Great British Bake Off?

Last year, The Great British Bake Off had an average consolidated audience of 10.4 million viewers and was the highest rating Bake Off series on Channel 4 to date. It was the wholesome content we needed during an otherwise miserable year.

And while it may be entering its 12th season, the prize has always remained the same: a bouquet of flowers and a cake stand. Yes, you read that right. There’s no money, no restaurant deal, and no spot on a cooking show waiting for contestants at the end of the gingham altar.

However, the reality is that many contestants will of course go on to gain much more than a cake stand. For example, 2015’s winner Nadiya Hussain has done incredibly well since she was crowned champion by Paul Hollywood and Mary Berry. She used her newfound success to secure cookbook deals, she’s written a memoir, hosted shows with the BBC, written a column with The Times magazine, and also occasionally makes appearances on The One Show.

Hussain isn’t the only contestant to have passed their knowledge on in a book. Ruby Tandoh, Chetna Makan, Candice Brown, Frances Quinn, Martha Collison, Kim-Joy, Benjamina Ebuehi, and Liam Charles are among some of the other contestants who have also published their own books. Charles also hosts Bake Off: The Professionals alongside comedian Tom Allen and 2012 winner John Whaite will star in Strictly Come Dancing in 2021.

Appearing on the show also does amazing things for your social media following. The Mirror reported that contestants on The Great British Bake Off have the potential of earning upwards of £10k per sponsored Instagram post. You don’t even need to make it to the final to earn big on Bake Off.

As the 12 new contestants enter the Bake Off tent they really will be fighting it out for the chance to have their name on a Bake Off cake stand. However, if past contestants are anything to go off, the opportunities that lie in wait after that are beyond anything they can imagine.

More like this
Turns Out George Clooney Is A Huge Fan Of This Classic British Game Show
By El Hunt
Spencer Matthews’ Impressive Net Worth Expands Far Beyond Chelsea
By Sam Ramsden
Molly-Mae & Tommy Fury Revealed Their Baby Girl's "Really Unusual" Name
By Sophie McEvoy and Sam Ramsden
Joey Essex Is Rumoured To Be Dating A 'Love Island' Favourite
By Sam Ramsden
Get The Very Best Of Bustle/UK
Sign up for Bustle UK's twice-weekly newsletter, featuring the latest must-watch TV, moving personal stories, and expert advice on the hottest viral buys.