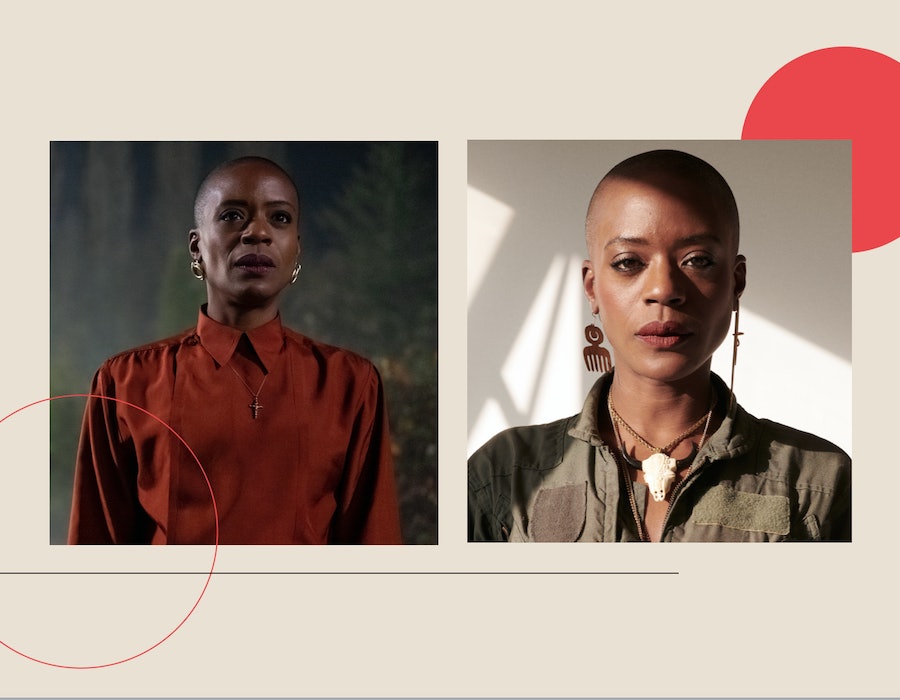 Spoilers ahead for The Haunting of Bly Manor. Of all the tragedies in The Haunting of Bly Manor, the fate of Bly's housekeeper Hannah Grose is one of the most devastating. She has a sweet and slow-burn romance with the charming chef Owen throughout the show, but in Episode 5, we learn the morbid truth: Hannah has been dead the whole time. She was pushed down a well by Peter Quint right before Dani arrived at Bly, and her grand Parisian romance with Owen will never be more than a fantasy.

"The tragedy [of Hannah] is it's too late when she allows herself to be loved," actor T'nia Miller explains of her character, pointing to the late-season scene in which Hannah — already a ghost — finally admits to Owen that she'd love to run off to Paris with him. "She's so busy loving everybody else that she's unable to receive that love because of the fear of being hurt and being let down."

It's for this reason that Miller, a London native known for her roles in the BBC thriller Witless and sci-fi drama Years and Years, was initially hesitant to play Hannah. "[She] just seemed very nice," Miller says with a laugh. "I don't play nice. I don't do nice."

But as a single mother, Miller did connect with Hannah's ability to "put aside your own personal feelings" and "just soldier on" for your loved ones. "Hannah's very loving and cares passionately and is fiercely loyal," she says. "I'm all of those things too, but I'm also an East Londoner and a Caribbean woman and I'm straight down the line, as they say."

This reflects in Hannah's work at Bly, where she maintains her professionalism even when it means denying her own desires. There are only a handful of adults living at the estate, and "Hannah fancies herself as the lady of the manor because she's been there the longest," Miller explains. "She's seen it all ... and it's hers to run so we see her turn out very tidy, very prim, very proper."

When Hannah meets Owen — a younger man who cooks, cares for his mom, and thoughtfully quotes Thomas Merton — she's thrown for a loop. "[Her husband] Sam left her for another woman, and as a 40-year-old woman in the 1980s, she spent the last five years with no sex, nothing," Miller says. "But here comes this handsome man who she immediately fancies and falls in love with."

It's the memory of the first time she met Owen that Hannah returns to over and over again in death, helping to keep herself grounded enough to physically materialize in the present. "I don't want to slip away. I want to stay here, with you," she tells Owen in her memories. Hannah's will to be with him is so strong that no one at Bly even suspects she's dead. She sips tea that doesn't go down her throat and holds onto items the other ghosts can't. Hannah's love for Owen — and her love for the children — sustain her in a very literal way.

After Dani allows The Lady of the Lake to possess her, Hannah and the rest of the ghosts are finally freed from the grounds. Owen stays with Hannah's body until the funeral, gently cleaning her with a lavender cloth in preparation for burial. Later, he opens a restaurant in Paris called A Batter Place, where he hangs a photo of Hannah on the wall. "The love that [Owen and Hannah] had for each other was beyond lust. It was genuine acceptance," Miller says.

When asked what Hannah would do if she ever got a chance to see A Batter Place, Miller smiles. "She'd be there organizing things and writing up the blackboard that goes outside for the menu. She'd be tasting all of his dishes. She'd be keeping it spic and span and cleaning it from top to bottom," the actor imagines. "She would just be 100% supporting [Owen] in that journey. They would have had the best time."

More like this
If 'Entergalactic' Season 2 Happens, You Could Get A New Kid Cudi Album
By Kadin Burnett
Jeffrey Dahmer’s Arresting Officer John Balcerzak Got His Job Back After Being Fired
By Grace Wehniainen
Here’s Where You Can Stream 'Schitt's Creek' After The Comedy Leaves Netflix
By Brad Witter
Watch The Thrilling Teaser Trailer Of 'Shadow And Bone' Season 2
By Gretchen Smail and Jack Irvin
Get Even More From Bustle — Sign Up For The Newsletter