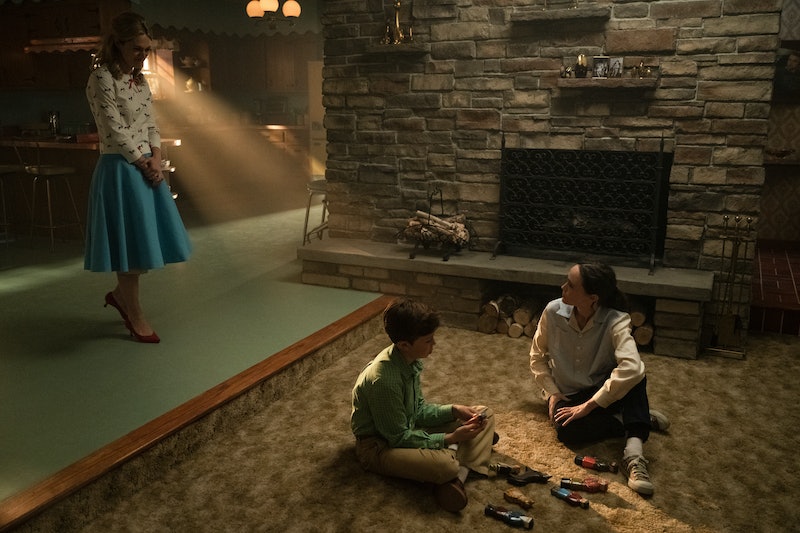 Spoilers ahead for The Umbrella Academy Season 2. When the Hargreeves siblings all crash-land in 1960s Dallas in disparate years, they each have to find a place to fit in. For Vanya, that's with Harlan, Sissy, and (regrettably) her husband Carl on their quiet ranch. After Vanya is hit by Sissy's car and develops amnesia, Sissy invites her to live with them and be Harlan's nanny. Through an accident, Vanya later transfers some of her powers to Harlan, and it's this that ends up playing a significant role in The Umbrella Academy Season 2 finale.

Like Sissy, Ray, and the antagonistic Swedes, Harlan isn't in the original Umbrella Academy comics. Though Season 2 and the second volume of the comics, Dallas, take place in the same city, they ultimately explore very different plot points and characters. Sissy and Harlan can be considered supporting characters in Vanya's journey, but Harlan is also set up as a potential lead character for future seasons. A quiet autistic boy, he forms an attachment to Vanya almost immediately; it's even as if he can sense her emotions before she can.

At the ranch, Vanya and Sissy slowly fall in love, and together with Harlan they imagine themselves as a happy family. Sissy's drunk and homophobic husband is always there to shatter the illusion, though, and after a big fight, Harlan runs into the forest and accidentally falls into a lake. Using her powers, Vanya parts the waters and retrieves Harlan. Without really knowing what she's doing, she transfers some of her powers to Harlan, instantly reviving him.

It's an ability we've never seen Vanya use before, and it doesn't become relevant again until Harlan and Vanya are separated. After Vanya is captured for trying to run away with Sissy and Harlan, she's handed over to the FBI, who believe she's a Russian spy. The FBI begin to torture Vanya, and miles away, Harlan feels her pain as if it's his own. He's able to deflect a bullet using his powers, and his father is accidentally shot. Simultaneously, both Vanya and Harlan enter a sort of all-powerful avatar state where they release sonic waves in a protective bubble. Ben manages to snap Vanya out of hers, but Harlan's powers spiral out of control on the farm.

Vanya and the rest of her siblings rush to save him, as his powers put him on the radar of The Handler. They succeed in defeating The Handler, but Vanya fails to fully take back all the abilities she gave Harlan. In the final moments of the show, he uses telekinetic powers to float his toys in the air as Sissy drives them to New Mexico.

What does that mean for a future season? It's honestly unclear. We don't know what Vanya actually did, and power transfer is not something she's capable of in the comics. (Honestly, after Five shoots her in the head in volume one, most of the story is just about her recovering from amnesia and paralysis.) We do know we're likely to see more of the 36 remaining children born in 1989, since the final moments reveal The Sparrow Academy from the comics. If Hargreeves noticed what went down at the ranch — and knowing him, he did — it's possible Harlan somehow ended up meeting Hargreeves. Being a young boy in 1963 would make Harlan practically a senior citizen in 2019, but with time travel and Hargreeves' technology, anything is possible. There is one silhouette in The Sparrow Academy who is clearly floating a square over their shoulder, so take from that what you will.