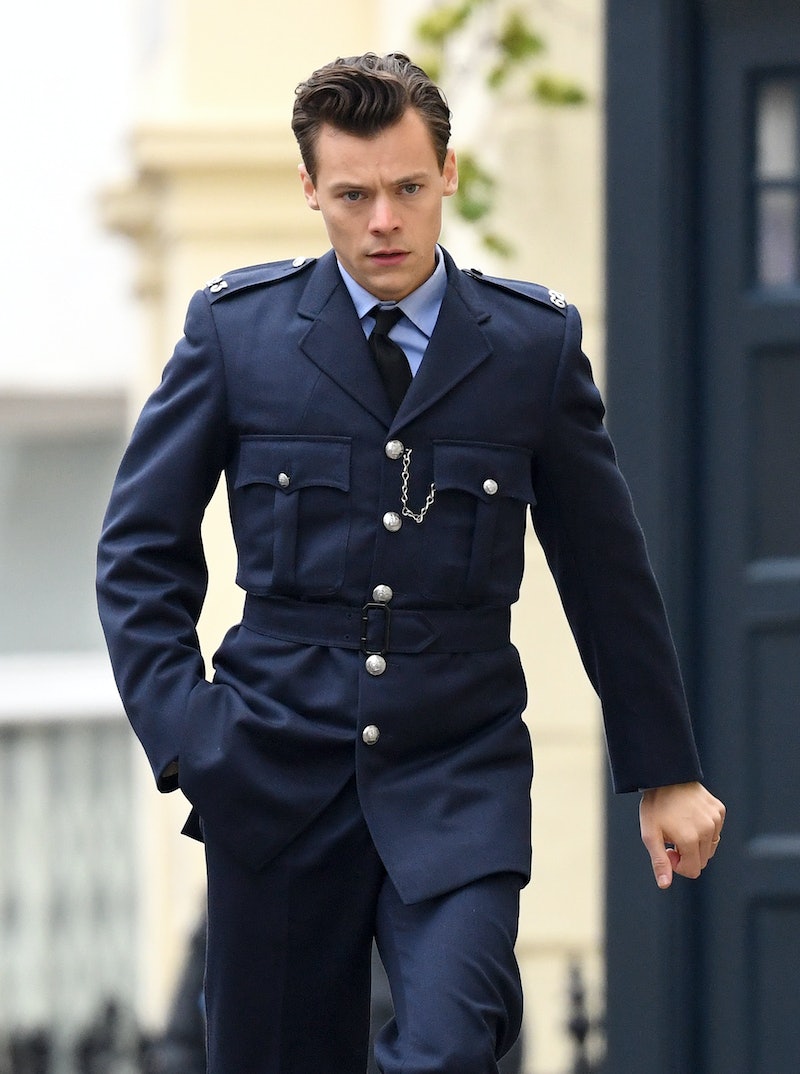 Just kidding, of course. Harry Styles was pictured swimming topless in the sea in Brighton, on set for his latest film My Policeman (swoon), but that's not the whole story. Yes, viewers were able to catch a glimpse of Mr Styles’ toned physique in the rather chilly English Channel, and maybe that will take all of your focus if you’re a true Styles Stan, but my mind wandered elsewhere. (Not there, get your mind out of the gutter.)

Maybe it's the older Millennial in me, but seeing Styles being dipped in and out of the choppy Brighton sea by the film production’s marine department (who knew that was a thing?) had me thinking of the more practical side of things. How did the ‘Watermelon Sugar’ singer get ready for his wet’n’wild scene?

This thought lead me to the ultimate question that now lives rent free in my head: How on earth were the production team able to cover up all of Harry Styles’ many, many, many tattoos? If you’ve ever seen a picture of him, you’ll know he has a lot of body art.

If you’ve not yet seen the pictures of Harry Styles on the My Policeman set, allow us to fill in a few details. The former One Direction star is seen in a pair of navy blue swimming trunks, as he’s taken out to sea by a speed boat to film the scenes. The standout anomaly (for me, at least) is that most of his 60+ tattoos are covered by makeup – including the central butterfly tattoo on his abs, and the two swallows on his chest (the elusive tiger tattoo on his thigh can still be seen in the images, presumably as filming was done from the chest up).

To be honest, the pics should come with a warning. Fans are already pretty excited about the 27-year-old’s upcoming film My Policemen, after they found out Styles – who plays a closeted gay man who’s married to a woman due to societal expectations in the 1950s – will have not one, but three nude sex scenes in the film. As you can imagine, seeing the ‘Golden’ singer filming some of the initial scenes in a 1950s policeman’s outfit, walking around Brighton and Hove, sent fans into a further spin. So, the latest images top all of that off. Who knows what a tatt-free torso could do to the Directioners?!

Styles seemed in high spirits on set, especially given the chilly temperatures (thank you May 2021), and the potential hours he must have spent in makeup getting those tattoos covered, all for a 15-minute take. Head of hair and makeup design for the production, Daniel Phillips, who has worked as chief makeup and hair on blockbusters such as No Time To Die and Allied, will certainly know a thing or two about coverage. And, I would love to know exactly what makes the concealer so waterproof?

Bustle has reached out to Phillips’ representatives for comment, and we will update this article as soon as we hear more, because honestly, if it’s that good at covering up Harry’s inkings (and his additional two nipples, don’t forget), I’m expecting miracles for my hormonal breakouts.