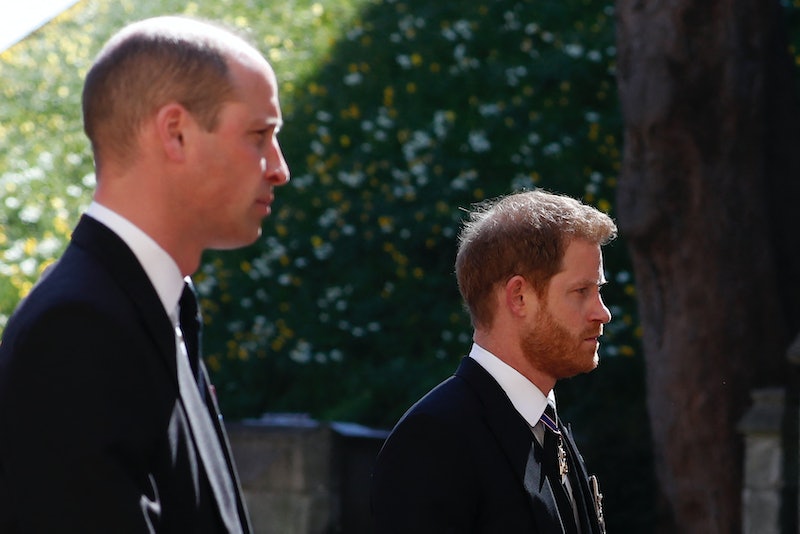 Royal family followers have wanted Prince Harry and Prince William to mend fences and put their differences aside for a while, they’ve reportedly done just that. Harry and William bonded once again, according to PEOPLE, at the April 17 funeral for their grandfather Prince Philip, who died on April 9. The brothers have allegedly been at odds since January 2020, when Harry announced that he and wife Meghan Markle would leave their posts as senior working members of the royal family.

While Harry and William didn’t march together into Philip’s procession, with their cousin Peter Phillips walking in between them, they apparently left the service together and chatted casually. “The procession choreography, in retrospect, was a mistake,” historian Robert Lacey told PEOPLE. “As we saw, they could have walked side-by-side quite happily after all. What pleased me afterward was that it all seemed so totally natural, and they drifted to each other like the old days.”

They have William’s wife Kate Middleton to thank, according to Entertainment Tonight. Kate apparently left the funeral with William and Harry, before stepping aside to chat with Sophie, Countess of Wessex, and give the brothers some space. “They were very tense as they walked into that chapel,” royal expert Katie Nicholl told the outlet. “As they came out of it, you could see some tension diffused. And I think that was largely down to the Duchess of Cambridge, who made a point of speaking to Harry and when she did that, you can see them visibly relax.”

In a statement released before Philip’s memorial, Buckingham Palace said the decision to have Harry and William not walk side by side was a “practical change” and not reflective of their relationship. “This is a funeral and we are not going to be drawn into perceptions of drama,” representatives said. “The arrangements have been agreed and represent Her Majesty’s wishes.”

Harry flew to the UK to attend the memorial service, marking his first time back home since the controversial interview. Meghan reportedly hoped to attend, but was not clear to fly by her physicians because Meghan is pregnant with their second child.

More like this
Prince Harry Incorrectly Recites Christina Aguilera’s “Genie In A Bottle” Lyrics
By Jake Viswanath
Kate Middleton Wore The Ultimate '90s Power Suit
By Sam Ramsden
Lisa Marie Presley's Secret Granddaughter Was Revealed At Her Funeral Out Of Nowhere
By Jake Viswanath
Here’s Why Tyler Perry Helped Prince Harry & Meghan Markle When They Moved
By Marina Watts
Get Even More From Bustle — Sign Up For The Newsletter
From hair trends to relationship advice, our daily newsletter has everything you need to sound like a person who’s on TikTok, even if you aren’t.