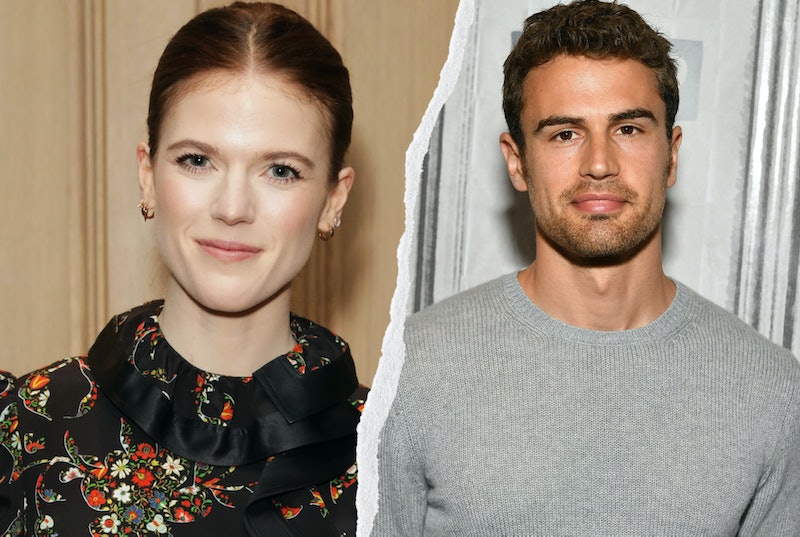 HBO is time traveling to a world where both the Game of Thrones and Divergent fandoms can convene in pop culture harmony. GoT’s Rose Leslie and Divergent’s Theo James will star in The Time Traveler's Wife series on HBO, as The Hollywood Reporter noted in February 2021. The project hails from Steven Moffat, a man who knows a thing or two about fandom after creating Sherlock and serving as showrunner on Doctor Who. He'll write the script and executive produce the show alongside Sue Vertue and Brian Minchin. David Nutter, known for his work on GoT, The X-Files, and Shameless, will direct all six episodes of the series’ first season.

A TV show adaptation of The Time Traveler's Wife has been in the works since 2018 and is inspired by Audrey Niffenegger's novel of the same name. As indicated by its title, the book tells the love story between Clare (Leslie) and Henry (James), a married couple whose romance is complicated by one partner's transportive powers. The Time Traveler's Wife was previously made into a 2009 film starring Rachel McAdams as Clare and Eric Bana as Henry.

On May 18, HBO announced that The Time Traveler’s Wife has officially begun production in New York. In the series’ press release, Moffat spoke about the project. “This is a story of loss but it’s not a tragedy. It's about a time traveler but it’s not science fiction. Despite Clare and Henry’s time scrambled relationship, this is the tale of a grand, ordinary love - but not necessarily in that order,” said the screenwriter. “This is a dream project for me. I have always loved Audrey Niffenegger’s extraordinary, moving novel and it has inspired me many times, so to be adapting it for television is the thrill of a lifetime.”

Francesca Orsi, HBO’s Executive Vice President of Drama Programming, also offered a quote about the show. “Steven Moffar is the perfect writer to bring this book and genre-bending story about marriage to life,” she said. “We also couldn’t be more thrilled that David Mutter will be returning to HBO to direct all episodes of the season.”

Ahead, everything we know about the romantic drama, including when you can watch it all unfold.

Leslie, who recently welcomed her first child with husband and GoT co-star Kit Harington, will play the "fiery, clever and unstoppable" Clare. In her official description, the character is described as having "an amazing secret" for the majority of her life:

"Since she was 6, she has had an imaginary friend: a kind and funny man, sometimes old, sometimes young, who appears in the woods behind her house and tells her tales of the future. Visits from the mysterious Henry are the bright spots in the tedium of her childhood. As the years pass, and she grows into a beautiful young woman, she starts to realize her friend is not imaginary — he’s a time traveler, visiting from the future. And he’s not just from any old future — he’s from her future. Clare has a literal date with destiny. One day she’s going to meet a young man called Henry DeTamble — whom she’ll know very well but who won’t recognize her at all — and she will become the time traveler’s wife."

Here's how HBO describes the time-traveling Henry, played by James:

"James' Henry DeTamble has been a time traveler since he was 8. It’s not a superpower, it’s a condition — he can’t help it. Sometimes, when Henry is stressed or worried — and sometimes for no reason at all — he loses his grip on the current moment and falls naked into the past or the future. One minute he’s making breakfast, the next he’s naked at a hoedown in 1973. He can be stuck there for minutes or months, he never knows. His life is a roller coaster of constant danger and white-knuckle survival. Until one day he meets a beautiful redhead in the library where he works. Her name is Clare Abshire and though he’s never seen her before, she claims to have known him all her life. Finally, his curse has given him something good — and Clare and Henry are about to have the time of their lives."

Additionally, an HBO press release revealed Desmin Borges (You’re the Worst) will star in the series as Gomez, Clare’s friend who happens to be secretly in love with her while maintaining a friendship with her husband. Natasha Lopez (Runner Runner) will play Charisse, Clare’s friend and roommate and Gomez’s girlfriend.

On Feb. 15, HBO announced the show would premiere sometime in the spring of 2022. Episodes will be available on HBO and to stream on HBO Max. The Time Traveler's Wife went to the premium cable channel after a "multiple-outlet bidding war," as reported by THR.

A month after HBO released first-look images of the show, the streaming service finally revealed the official trailer.