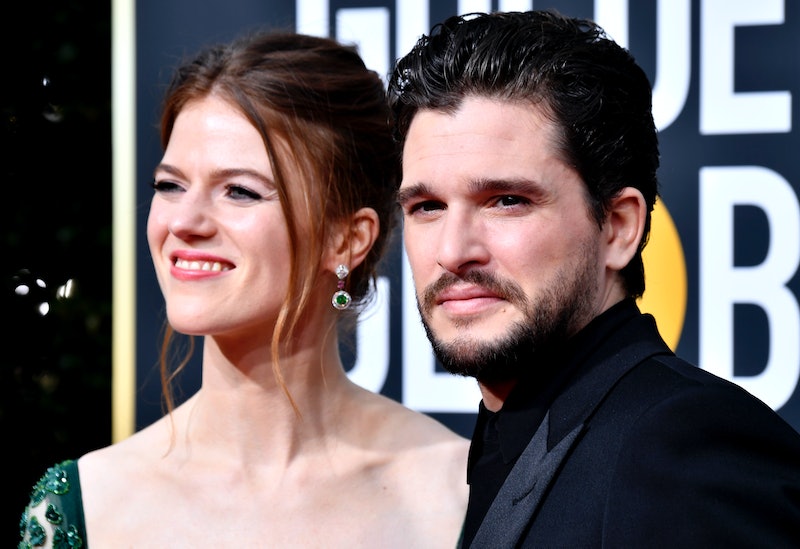 Although Game of Thrones' Jon Snow and Ygritte's love story ended in tragedy, the married actors who played them just expanded their family. Kit Harington and Rose Leslie officially welcomed their first child — a baby boy — on Feb. 16. E! News reports that the pair "confirmed the news by stepping out with their newborn in London" that day, and you can check out the pictures right this way. Harington’s rep tells E! that both Harrington and Leslie are “very very happy!”

Harington and Leslie's relationship began in 2012, and the couple wed in 2018. News of Leslie's pregnancy was revealed in September 2020 within the pages of the U.K.'s MAKE magazine. Dressed in a flowing Stella McCartney dress for the maternity photoshoot, Leslie described how she felt about carving out a life with her husband and soon-to-arrive baby away from any city noise.

“What a glorious thing to be able to run to the countryside and recoup. It’s a great privilege to be surrounded by greenery, birdsong and hedgerows, and our delightful neighbors. It’s so peaceful,” she stated. The Death on the Nile Star also gushed about becoming a first-time mother to the New York Post in the latter part of 2020.

Leslie exclaimed, “I am thrilled to be expecting, and I can’t wait to meet the new member of our family!” Harington held the same sentiment, confessing in an interview for InStyle’s May 2019 issue that the most significant role he’ll ever play would be as a proud dad in real life. “The most important job [portraying Jon Snow on Game of Thrones] I’ll ever have is about to finish… Well, not the most. Hopefully, I’ll be a father,” he said.

Harington and Leslie have yet to reveal their son's name or birthdate, but all that information will likely come soon enough.

More like this
'GoT' Star Emilia Clarke Says She "Just Can't" Watch 'House Of The Dragon'
By Brad Witter
Turns Out George Clooney Is A Huge Fan Of This Classic British Game Show
By El Hunt
'Bridgerton's Regé-Jean Page Is The World’s Most Handsome Man
By Darshita Goyal
New Details About Jeremy Renner's Snowplow Accident Reveal The Actor's Intentions
By Sam Ramsden
Get Even More From Bustle — Sign Up For The Newsletter
From hair trends to relationship advice, our daily newsletter has everything you need to sound like a person who’s on TikTok, even if you aren’t.