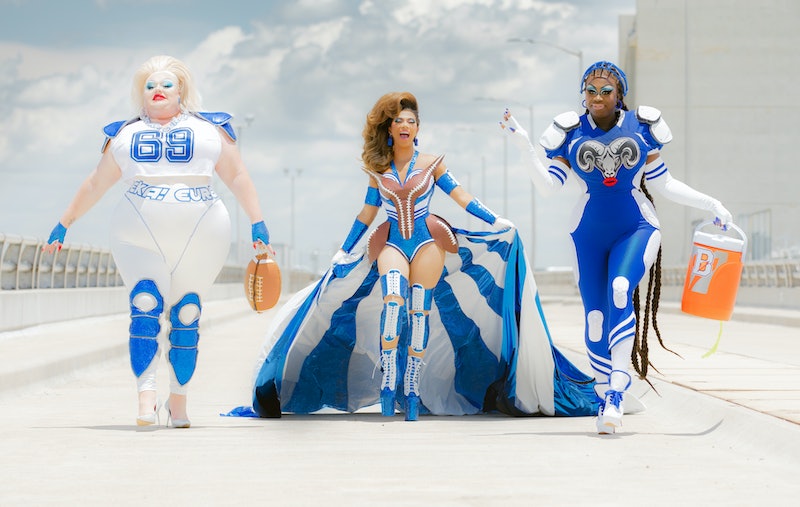 Throughout the second season of HBO’s Emmy-nominated reality series We’re Here, which debuts on National Coming Out Day (Oct. 11), viewers are exposed to all kinds of people who make up the diverse queer community. The participants that hosts Shangela, Eureka, and Bob the Drag Queen take under their wings as their new “drag children” all identify differently and have gone through or are still going through their unique journeys to discover their true identities.

The three hosts open up to Bustle about their coming stories, below in their own words, just like some of the participants do on this new season. Many of the fresh faces have survived the scary and sometimes difficult experience of coming out. Audiences at home are given the opportunity to watch as these brave queer people discover exciting things about themselves and share them with their loved ones. We’re Here’s new episodes feature people telling their families they don’t identify as the gender they were assigned at birth, people sharing details about their entry into the LGBTQ+ community, and at least one man finding the courage to tell his parents he’s gay.

To mark We’re Here’s new season and to celebrate National Coming Out Day, read the many coming out stories from the three Drag Race alums ahead.

My coming out story is kind of twofold. One coming out was to my mom. When I was almost 18, I was about to graduate high school and I started going to Dallas and bringing a lot of friends home. My friends were more obviously gay than I was, or more proudly gay, I should say. My mom pulled me aside and said, “I love your friends. They’re gay, I know that. Are you gay?” It was so jolting to me because I was a dramatic teen. Like, how could you ask me that? My mother is so invasive! I ran off and slammed the door. Then I came back later and said, “And what if I was?” She goes, “Well, that’s fine. I still love you. I just want you to be safe and you should be able to talk to me about stuff like this.” And I said, “Fine, I am,” and she goes, “OK.” And I guess in that moment, I felt reassured at least that my mother was not going to throw me out. She supported me. I was very grateful, because I know so many people do not have that reaction and that experience with their coming out.

Another part of coming out was really coming out to myself. As I continued through high school and then my freshman year of college, I wasn’t super comfortable with being gay. I think it was the environment I was raised in. I was raised in a small town where there was not a lot of visibility or positive representation. A part of me was like, it’s a bad thing and I shouldn’t be gay. So I tried to hide those parts of myself, even though they were very obvious. In my mind, I didn’t feel comfortable saying I was gay or owning and embracing that part of myself until I took some time to meet more people that were gay and to go out and see gay life, experienced gay life. Then I realized that gay was not a bad thing. It’s a great thing. Then I started living a much happier life.

Being a drag entertainer, that was a coming out for me to my family. When I went on RuPaul’s Drag Race, I thought, I’ll tell them after the filming, but for Season 2, I was only there for like two days. So I totally forgot about it. Not the show, but I went right into work mode and didn’t think, oh, it’s going to come on television and my family will see it back in Paris, Texas. Well, they did. I got a call from my grandma saying, “I hear that you’re on TV dressed as a woman. They say you go into a grocery store with a wig?” So that forced a conversation that I would not have chosen to have as freely, had I been dragged out of the closet as a drag entertainer to my family. But because I did have that conversation, we were able to talk about it and the misconceptions that my grandma had. It actually brought us closer together because that was another part of my life that I didn’t have to shield off from the rest of my family.

I came out to people at different times. I came out to my mom the day I graduated high school. The first time I came out was to my best friend at the time, Alisha. She was a freshman in college and I was a senior in high school and I was visiting for spring break. I think I may have had a little too much to drink that night. I was like, “You should know that I’m gay or something.” I don’t know what I said at the time. This was before Facebook, so you had to come out a lot of times in a row.

I haven’t really been doing a lot of re-coming out in my day. I don’t really see a need today for me to update everyone in my life every time I discover something new about myself, cause I’m on a constant journey with finding myself anyway. But for people who do that, it is really valid and super exciting.

I had a few coming out stories. I told my twin sister before I told anybody else. I don’t really remember how it went down. I was like, “I have to tell you something. You’re never going to guess,” of course with the whole dramatics. I was like, “I’m gay.” and my sister’s just like, “You’re my twin brother. I know you’re gay.” So then it was like, how do I tell mom, how do I tell dad? I actually didn’t tell my dad, but I did tell my mom and then my dad found out through other people. My coming out is weird because I blocked a lot of it out. I came out my senior year of high school. Most people were like, “Yeah, we kind of knew.” And then there were a lot of people that were like, “We defended you and you made us out to be liars.” That stereotypical negative response where people made it all about them. But for the most part, it was pretty smooth.

When I came out as gay to my mom, it was really hard on her. I was closer to my mom than anyone in the world, everyone knows that. When I came out to her, we had a rough few months where we didn’t really talk. She was quiet. When we did finally talk, she was worried for my health and worried about me having a successful life. She had a friend in Germany who got beat up and ultimately killed for being gay. Then I had to come out as trans when I was 19 or 20. I decided to transition and live my life as a female full-time. So I had to come out to my mother again as a trans woman, and strangely, it was easier for her to understand. For her, it was like, “Well that makes sense. You like men because you’re a woman.” It was that traditional mindset of like, you did always like playing with Barbies and you always wanted to wear girl’s clothes. I lived trans for about four years and then I had to come back out, as I decided to re-transition and try to live as a gay man again. And then I had to come out again as non-binary.

I finally realized I’m not a gay man, clearly, because this is not it. Then I found the comfort of non-binary. When I fully became aware of my non-binary stature, my mom had already passed, so it wasn’t a coming out I had to have with her, it was more of a coming out I had to have with myself. Finally understanding who I was. Finally realizing where this rollercoaster of identity has come from. There’s a gray area and there’s this place where I can live in comfort knowing that I don’t have to make a decision, which is really powerful.

READ NEXT: Eureka’s Music Tribute To Their Late Mom On Drag Race