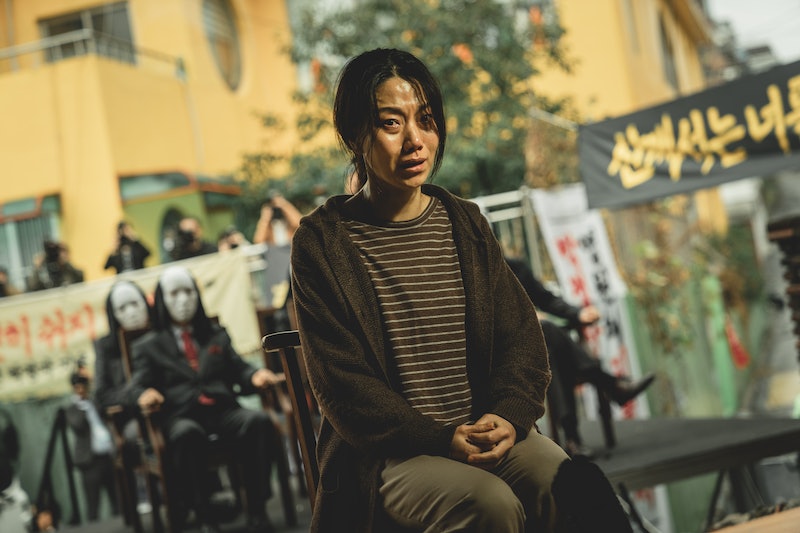 Spoilers ahead for Hellbound Season 1. Netflix’s new South Korean drama Hellbound, a dark thriller from Train to Busan director Yeon Sang-ho, centers around an alternate reality version of Earth in which — following an angel’s decree — demons suddenly arise and begin dragging people to hell. The leader of the New Truth Society, a church that rises to power amid the chaos, claims that it’s a call to live a righteous life. But the end of the season completely undermines that doctrine when it’s revealed that the demons aren’t just attacking those who have gravely sinned — they’re choosing people at random. Furthermore, they may not even be dragging people to hell at all, as a victim from earlier in the season, Park Jung-ja, is seemingly resurrected from the very spot she died.

Yeon told the Korea Times that the ambiguity about what’s happening is the whole point of the show. “If that mystery is explained, it wouldn't be of the cosmic horror genre,” he said, explaining that the story is meant to depict religious fanaticism. Still, that hasn’t stopped people from coming up with a number of Hellbound theories on Reddit to try to make sense of what’s going on. Read on for the most compelling ones so far.

One of the most popular theories is that Jung-ja suddenly resurrected as a way to balance the cosmic scales after So-hyun and Young-jae, who were not condemned, die while protecting their condemned baby Toughie (who subsequently lived). If this theory is correct, that means there’s potentially one other victim who was also resurrected.

Others think Jung-ja simply came back because God decided to restructure how time is served in hell — and Jung-ja, who didn’t seem to commit a serious crime, had simply finished her sentence. This is one of the more literal takes, suggesting that God is a vindictive entity trying to scare everyone into living a more righteous life. The exact definition of “a righteous life” is incredibly murky in the show, which makes this an intriguing theory that would certainly put Hellbound under the “cosmic horror” umbrella. Is the true antagonist of the series God, whose actions and judgements cannot be trusted?

Hellbound is about determinism

Yet another theory follows in the vein of Minority Report: God chooses the victims based not on what they’ve done, but on what terrible sin they’re going to commit. One Reddit user pointed out that Jung Jin-su was given his decree 20 years earlier, but was killed by demons right after he killed someone, for example.

Other commenters in the thread disagree with this theory, as many of the reasons we’re given for why the victims deserved to die are told to us by the notoriously shady New Truth and Arrowhead cults. Also, the idea that there’s no free will in the world would make the show even more punishing to watch than it already is.

The baby was a test

Another Reddit user believes that the demon demonstrations were meant to be a test from God to see if humans would intervene to save their fellow man. But sadly, it took until Toughie was decreed for people to finally act. This would mean that Jung-ja and all the other so-called sinners were resurrected as a sign that humanity had finally passed the test, which does paint God in a slightly more compassionate light than the other theories, but still supposes that humans are simply chess pieces in some cosmic game.

The show is supernatural, not religious

One Reddit user believes that the focus on God is actually a distraction, and the true antagonist is someone else who is summoning the creatures. The Redditor suggests the story could be similar to Death Note, a manga that follows a teen who killed people by writing their names in an otherworldly notebook.

It’s all just an analogy

It’s also possible that Hellbound’s monsters are not to be taken literally at all, and the entire show is just one big analogy about the dangers of religious zealotry. As one Reddit user pointed out, the reason why someone like Jung-ja is branded a sinner while the Arrowhead members, who torture and maim people in God’s name, are not is never explained. Because perhaps that’s the point: it’s all meant to be a commentary on how becoming fanatical and wielding religion against others can be just as dangerous as any shadowy monster.

Whichever the case, don’t expect any of these theories to be confirmed any time soon. Yeon told Huffpost Korea that they have yet to discuss whether they’ll film a second season, but are definitely planning on releasing new chapters of the Hellbound webtoon — which he created alongside artist Choi Gyu-seok Choi — in late 2022.