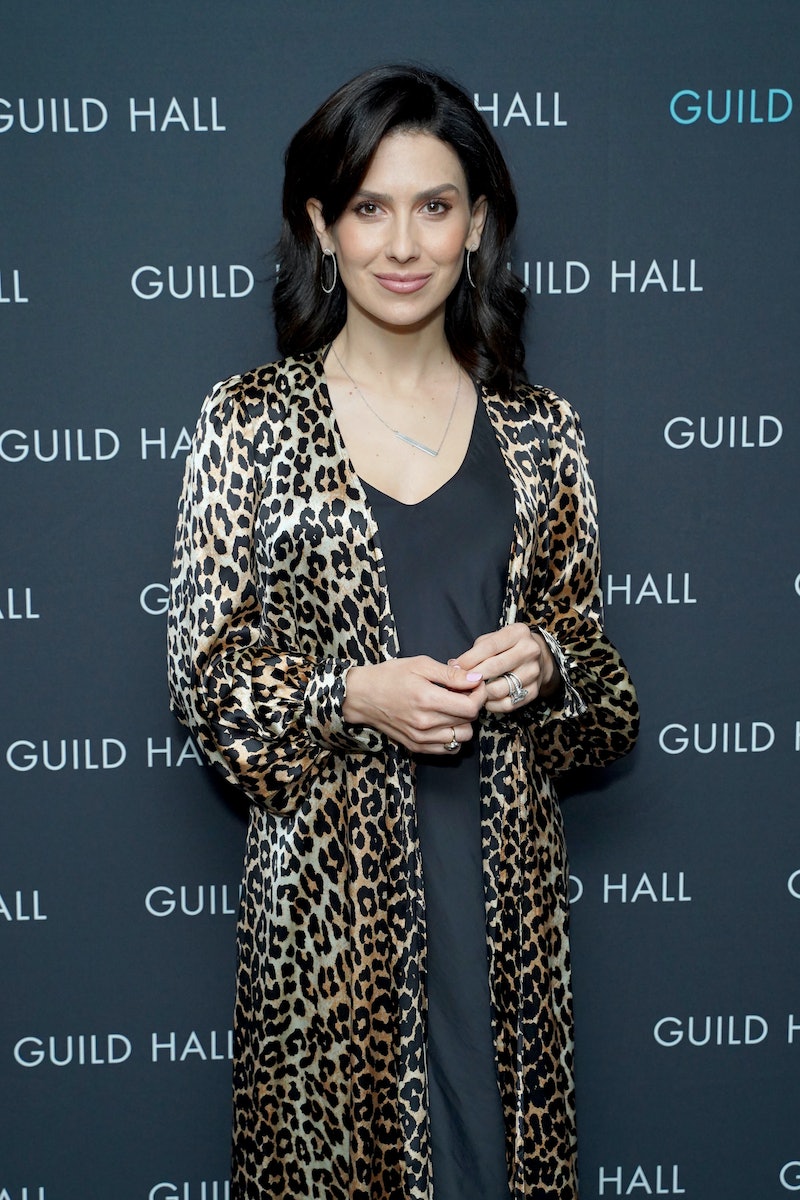 Hilaria Baldwin garnered a lot of attention this weekend when internet sleuths suggested that the yoga instructor, author, and wife of actor Alec Baldwin has possibly been faking a Spanish accent. The controversy didn't end there, though; Hilaria came under fire for using two different names and for allegedly pretending to be Spanish despite being born in Boston. Of course, this prompted a social media firestorm, with many people demanding answers about her true identity.

"I was born in Boston and grew up spending time with my family between Massachusetts and Spain," the 36-year-old mother of five wrote alongside a lengthy video explanation. "My parents and sibling live in Spain and I chose to live here, in the USA." But if you're just now attempting to catch up on the controversy over Hilaria Baldwin's identity, it's understandable that you might be feeling a little lost. A lot has happened since the initial tweet thread set off a flurry of responses across the internet and from the Baldwins themselves. Below, a guide to everything you need to know about one of the most bizarre controversies of a very bizarre year.

How Did The Hilaria Controversy Begin?

This very unexpected story first started with comedian Amy Schumer, who reposted a photo of Baldwin holding her son Eduardo while wearing lingerie on her own Instagram as a joke. "Gene and I wanted to wish everyone a happy holiday season," Schumer captioned her repost. "Enjoy it with whatever family members are talking to you this year."

Unfortunately, the joke did not sit well with Baldwin, who said in a video response on Instagram that it spun "out of control." And while her message about body inclusivity was a positive one, it was almost totally lost in the shuffle when fans noticed that her voice in the video seemingly lacked the Spanish accent she had used in past interviews.

What Evidence Do We Have So Far?

"You have to admire Hilaria Baldwin's decade long grift where she impersonates a Spanish person," Twitter user @lenibriscoe wrote at the start of her Twitter thread, which was full of snippets of Hilaria's "fake Spanish accent." However, it was a video of Hilaria asking for the English word for "cucumber" during an old cooking segment on the Today show that sparked the most attention.

"She's a total fraud," one person tweeted. "Hilaria Baldwin pretending not to know how to say cucumber in English is the greatest moment of unintentional comedy of the 21st century," someone else added. Others came to her defense, explaining that it's natural to mix up words when you speak multiple languages. "I grew up bilingual," another person wrote on Twitter. "Sometimes I genuinely can't remember the name of one thing in English, but I do know it in Italian, and my brain has to search the old rolodex until I find it. The desperation Twitter folk have to tear people down is really quite sad."

If you didn't think things could get any more bizarre, think again. Despite confirming herself that she was, in fact, born in Boston in the recent video she posted dispelling the rumors, the author's professional bios at one point stated otherwise. According to the Daily Beast, Hilaria's IMDb description recently stated that she "was born on January 6, 1984, in Mallorca, Spain as Hilaria Lynn Thomas," though her birthplace has since been changed to Boston on the page. Per Page Six, the bio on her agency's speakers site also says that she was born in Mallorca, Spain, but raised in Boston. Additionally, a 2016 interview with Hola! magazine claimed that "Hilaria, who was born in Spain, has made certain to raise her children with her native language, Spanish."

Of course, that would all seem totally normal if Spanish was her native language, but that doesn't appear to be the case. According to Page Six, her parents have lived in Mallorca since 2011, but before that, they lived in Massachusetts. "Hilary's Google results say she was born to a Spanish mother and yet here we have her very American sounding mother talking about growing up in Massachusetts," @lenibriscoe tweeted alongside a video of Hilaria's mom, Dr. Kathryn Hayward, speaking at her alma mater.

We know what you're thinking: If Hilaria's not Spanish on her mother's side, perhaps her father's side of the family is from Spain. Well, that doesn't appear to be the case, either. "Hilary's grandfather was a college professor in the 1960s in Longmeadow," @lenibriscoe wrote. The man's obituary even says that the family's presence in Vermont "predated the American Revolution."

Furthermore, Baldwin's private school, the Cambridge School of Weston, names Baldwin as a 2002 graduate, and several of her former classmates have come forward to confirm that she did, in fact, attend the school while growing up. "I know Hillary Hayward-Thomas from the Cambridge School of Weston in MA," one person wrote in a review of Hilaria's podcast. "She didn't have an accent then and didn't change her name to Hilaria. Because she's not Spanish!"

However, in a recent appearance on the Momtruths podcast from April 2020, the yoga instructor said she moved to the United States when she was 19 to go to NYU.

Has Hilaria Addressed The Controversy Herself?

On Sunday, Dec. 27, Hilaria responded to the controversy outright on Instagram, confirming that she was born in Boston but split time between Massachusetts and Spain. "We celebrate both cultures in our home," she wrote in the caption of an Instagram video. She also addressed her name change in the clip: "When I was growing up, in this country I would use the name Hilary, and in Spain, I'd use Hilaria, and my parents call me Hilaria."

"A handful of years before I met Alec I consolidated the two," she continued. She also seemed to reference cucumber-gate in the video. "I am that person that if I've been speaking a lot of Spanish, I tend to mix them, and if I'm speaking a lot of English, then I mix that," she said. "I try to speak more clearly in each language but sometimes I mess it up."

On Wednesday, Dec. 30, the New York Times released an interview with Hilaria in which she once again clarified her identity — and blamed other people for "misrepresenting" her. "It's very surreal," she told the newspaper of the controversy surrounding her heritage. "There is not something I’m doing wrong, and I think there is a difference between hiding and creating a boundary."

Baldwin went on to explain that she's been "very clear" about who she is and that it's other people who haven't been paying attention. "I was born in Boston," she said. "I spent time in Boston and in Spain. My family now lives in Spain. I moved to New York when I was 19 years old and I have lived here ever since. For me, I feel like I have spent 10 years sharing that story over and over again. And now it seems like it’s not enough."

According to Hilaria, Spain is a place where her father created "deep, deep, deep bonds," revealing that her family would travel there at least once per year. However, the yoga instructor declined to say how long each visit was and whether or not they were simply vacationing. "I think it would be maddening to do such a tight timeline of everything," Baldwin said. "You know, sometimes there was school involved. Sometimes it was vacation. It was such a mix, mishmash, is that the right word? Like a mix of different things."

She also revealed that, for her, home has always been wherever her parents are. And in her view, she wasn't being intentionally deceptive when she said she was "going home" while referring to Spain. "Home is where my parents are going to be," she continued. "If my parents move to China, I am going to go to China and say, 'I'm going home.'"

Although the world now knows that Baldwin and her family are actually from Boston, the podcast host wants people to understand that Spain has always been a huge part of their lives and always will be. "My family, this is where they've decided to spend their lives," she added. "I guarantee you they are going to live there and they are going to die there. That's their home and that's because this is not something new, no one put a map up on the wall and threw a dart at it and said, 'Oh, Spain sounds good.'"

Has The Baldwin Family Come To Hilaria's Defense?

On Sunday, Dec. 27, Alec Baldwin defended his wife in a video he posted to Instagram, urging his followers to check their sources before spreading misinformation. "There's things that have been said lately about people that I love and I care about deeply, which are ridiculous," he said, referring to the allegations that his wife is guilty of cultural appropriation. "Majority of what's been said is false, and some of it's so spectacularly false, and they've said it about people I love."

The following day, Alec doubled down on his defense once again — this time in response to a piece penned by People writer Ale Russian titled, "Why the Hilaria Baldwin Scandal Is Painful for Immigrants — Including Me." Russian called out Hilaria's "fake exaggerated accent while so many immigrants, especially POC, are ostracized, marginalized and ridiculed for the same," which prompted a response from Alec. "Fake? Exaggerated? Appropriated an accent as an adult? She lived in Spain for many years as a child," he tweeted. "She lived both places." (This came after he told an Instagram follower to "go f*ck yourself" for accusing his wife of being a fraud.)

Hilaria's stepdaughter, Ireland Baldwin, made her support for her stepmom clear in the comments of her Instagram video explanation. "I wish people had the chance to know you and know your story the way that I do rather than from a fabricated nine hour long Instagram story," the model wrote. "I think you are an incredible mom and an inspiration." And before confirming that Hilaria actually does know what a cucumber is, Ireland went on to say how lucky she is to have her as a stepmom. "I love you and I find it really sad that people have the time that they do to play detective and make up a lot of lies and fabricate a lot of truths to fit a story," she wrote.

Ireland took to Instagram Story shortly after and called the backlash "pathetic." She said in a video, "It's the holidays and people are depressed, people are going through a lot. I know I'm going through a lot, personally." The model continued, "And the last thing we really need to do is start sh*t and gossip about something that is so, so stupid. And about somebody that nobody really even knows." She reiterated that her stepmom is a "wonderful" and "caring person."

Billy Baldwin, Alec's brother, also opened up about the controversy in a recent interview with Page Six. "This is probably an awkward and embarrassing time for Alec and Hilaria," he said. "I've been texting Alec the whole time to make sure he's OK and if he needs anything." His wife, Chynna Phillips, also weighed in, explaining that this isn't new to her and her family. "My family has been through this before," she added. "I was born in a fishbowl, and this kind of stuff has been happening around me since 1968."

Phillips, who's a singer in Wilson Phillips and whose parents were in the Mamas and the Papas, also spoke about Hilaria in a recent YouTube video. "I feel terrible," she said. "Who's going to throw the first stone at my sweet sister-in-law? She’s a good woman and you know none of us are perfect. We all have issues."

This article was originally published on Dec. 28, 2020