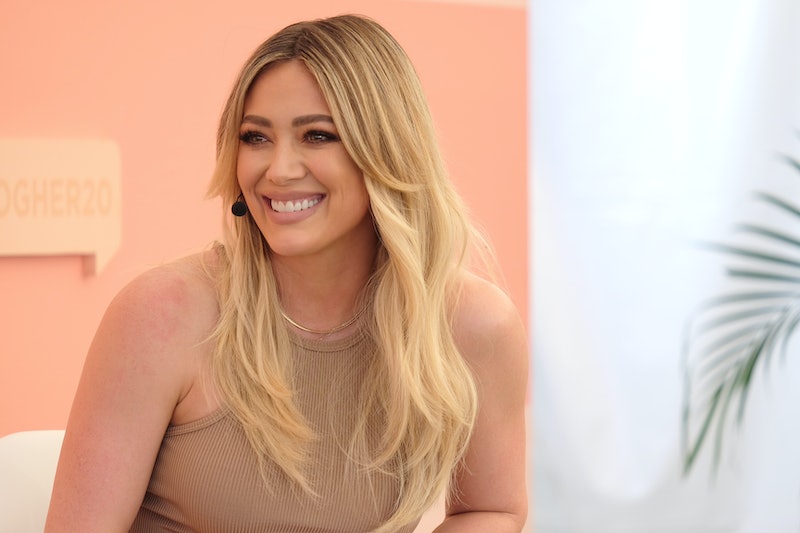 Hey now, hey now — Lizzie McGuire is about to become a mom again! On Saturday, Oct. 24, Hilary Duff announced that she is pregnant with her third child, sharing a sweet video on Instagram of her husband, Matthew Koma, rubbing her growing belly as they grin at the camera. "We are growing!!! Mostly me," Duff captioned the clip, which Koma also shared on his own social media page. "Lol quarantine was fun," the musician wrote, revealing that "Baby #3" is due in 2021.

The big news comes almost a year after Duff and Koma tied the knot in a low-key ceremony at their home; the pair welcomed daughter Banks Violet in 2018, and Duff is also mother to 8-year-old Luca Cruz. While she hasn't shared Luca and Banks' reaction to learning about their newest sibling, Duff told PureWow that her son was "skeptical" of becoming a big brother ahead of Banks' birth.

"The guilt that I felt for bringing her into the world was so big," Duff said, explaining that she was worried about how Luca would react to no longer being an only child. "It was just he and I for so long that he was like, ‘Why? Why, Mom? Why would you do this? I really just love the way it is.’ And it wasn’t bratty, it was just so sad."

However, once Banks was born, Luca became "obsessed" with his new baby sister. "He came in after I had her. I was just holding her, and the look on his face was an absolute shock. He just said, 'That’s my sister!'" Duff recalled. "It’s the best. It’s a chemical reaction between siblings sometimes where he knows he has to protect her. It’s really sweet the way he looks out for her."

In July, Duff told People that she and Koma were "toying" with the idea of having another baby, though they were "spread pretty thin" with two young kids. "We're obsessed with our kids and [we're like], 'Should we do one more? Is this a good time?'' she said at the time.

However, Duff continued, the ongoing coronavirus pandemic made them second-guess whether or not it was the right time to have a third child. "It's tough because everything is so uncertain. Like, is it safe to have a baby right now? We don't know," she continued. "Can we hold on for two years or is work gonna be crazy? We're always kind of talking about it and toying with the idea, but nothing too serious yet."

Duff's pregnancy news comes just a few months after Darren Star announced plans to develop a Younger spinoff centered on her character, Kelsey. "It’s just something we’ve been thinking about," the creator and writer told the Associated Press in early October. "I love Hilary Duff, and I think it’s gonna be something that [will] possibly be a whole different show than Younger but sort of it would be her character." Duff has not yet commented on the spinoff, but Younger is set to end after the seventh season, which will likely set up Kelsey's new storyline — and possibly, even open up the possibility for art to imitate life.