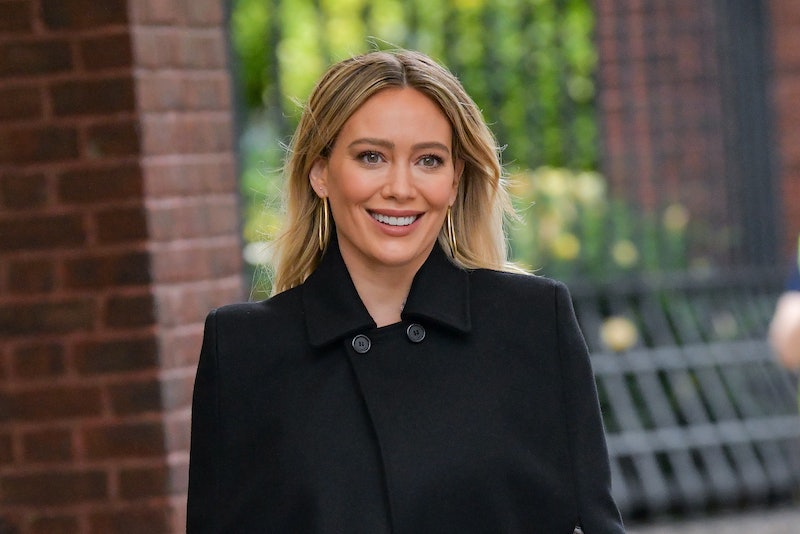 Disney+'s Lizzie McGuire reboot ended up not being what dreams are made of, and fans are still reeling from its cancellation, including its star. Hilary Duff reflected on the scrapped Lizzie McGuire reboot and reminisced on what her iconic character would have been like at 30 years old. Fair warning: it will only make fans want the reboot even more.

Speaking to Good Morning America, just three months after Disney+ canceled the highly anticipated reboot, Duff explained how she thinks her character would have grown should she have gotten the chance to portray her for longer. "I think she would be quirky, I think that she would struggle with confidence, but I think at the end of the day, she finds her footing," she said. "That’s what’s so lovely about her, and that’s what so relatable is that she doesn’t have all the answers right away, but she's on the right path."

Disney+ announced the planned Lizzie McGuire reboot in July 2019, confirming months of speculation that Duff would return to the role almost 20 years after Duff originally portrayed the character. The show began shooting that November, before the streaming service announced in January 2020 that production had been halted after showrunner and original series creator Terri Minsky had been fired. Reports from Variety and PEOPLE indicated that Duff and Minsky wanted to take Lizzie in a more adult direction, showing her as an authentic 30-year-old woman. Duff is 33 in real life.

Disney+ was initially onboard, with executives being on set and approving the show's content, before seemingly changing their mind and wanting to take a more family-friendly route. Duff took to Instagram in February 2020 to confirm the speculation and asked Disney to move the reboot to Hulu, just as they had done with Love, Victor. "I feel a huge responsibility to honor the fans' relationship with Lizzie who, like me, grew up seeing themselves in her," she wrote. "I'd be doing a disservice to everyone by limiting the realities of a 30-year-old's journey to live under the ceiling of a PG rating."

Ultimately, in December 2020, Duff announced that the reboot would no longer move forward, indicating that she and Disney+ couldn't come to an agreement, much to the fury of fans. "I know the efforts and conversations have been everywhere trying to make a reboot work but, sadly & despite everyone's best efforts, it isn't going to happen," she wrote on Instagram. "I want any reboot of Lizzie to be honest and authentic to who Lizzie would be today. It's what the character deserves."

Duff told GMA that the cancellation was a "big disappointment, obviously." However, she still has fond memories of the two episodes she was able to shoot with original cast members Jake Thomas, Adam Lamberg, Hallie Todd and Robert Carradine. "I will forever be grateful for the two episodes that we did shoot," she said. "It was a really special two weeks of my life."