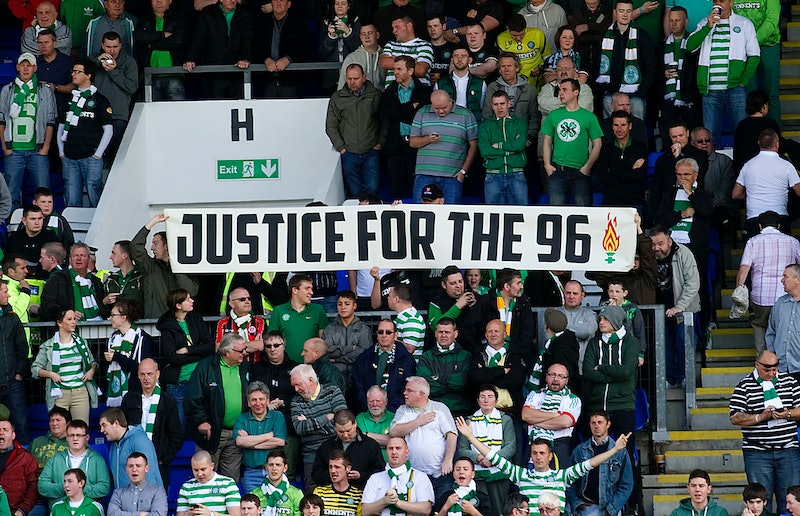 On April 15, 1986, a sold-out game between Liverpool and Nottingham Forest took place at Hillsborough Stadium in Sheffield. Due to numerous failings made by South Yorkshire police officers at the match, a fatal crush ensued resulting in the death of 97 people, and left more than 760 injured.

ITV’s drama Anne shines a more personal light on this harrowing story, focusing on Anne William’s fight for justice. Played by Maxine Peake, the drama follows Williams as she tirelessly campaigns to find the truth about the death of her 15-year-old son, Kevin. It also documents the events that took place at the match, as well as the numerous inquests that were spearheaded by the families of those who lost their lives.

So what exactly happened at Hillsborough, and did the families find justice for their loved ones? While in no means an exhaustive deep-dive of the 32 years of establishment lies, media smears, inquests, trials, and retrials the families of those who died at Hillsborough have gone through, this is a brief summary.

The Hillsborough Disaster Itself

Despite being the larger club, 24,000 Liverpool fans were allocated the west side of the stadium at Leppings Lane, which only had one entrance. Over 10,000 of these supporters had standing tickets and were expected to flow through seven turnstiles to the standing terraces, known as the pens. These were terraces divided by high fences that fenced spectators in and prevented them from entering the pitch.

The pens were erected in 1977 in order to combat football hooliganism. There were seven pens in total, with a wide tunnel providing access to pens three and four behind the goal. These were the pens where the crush occurred, as signage to the other five was poorly marked, meaning that the majority of the fans were tunneled into the overcrowded pens behind the goal.

An hour before kickoff, 2,000 of those with standing tickets had already made their way into the central pens, and an increasingly large crowd had formed outside the stadium due to a bottleneck at the turnstiles. In response, the police match commander David Duckenfield authorised an exit gate to be opened to relieve the pressure, which resulted in thousands more fans rushing to the already packed central two pens, causing a fatal crush.

Players took to the pitch shortly after, causing yet another surge within the pens, crushing those at the front into the high barriers. It would be six minutes until the game was called off, and by that time, the crush barriers had given way. Fans tried to escape by climbing the high fences or by being lifted by spectators in the seating terraces above.

Though 96 people lost their lives on that day or in the immediate aftermath, Andrew Devine was added as the 97th victim of the disaster in July 2021. Though he died 32 years after the disaster, a coroner’s court ruled he was unlawfully killed, having suffering severe and irreversible brain damage at Hillsborough in 1989, per the Guardian.

In the years following the disaster, an investigation into the deaths of the 96 Liverpool FC fans deemed them accidental, rather than unlawful. Since that verdict, the families of the deceased fought for justice for the 97 who lost their lives and have been instrumental in bringing further inquests and reports to the forefront following the initial investigation.

The victims’ families brought a private prosecution forward against the police match ground commanders — David Duckenfield and Bernard Murray — in 2000. They were charged with manslaughter, misconduct, and perverting the course of justice, per the Hillsborough Justice Campaign. Neither Duckenfield nor Murray were convicted of these charges.

The fight for justice continued, and the Hillsborough Independent Panel (HIP) was created in 2009. Three years later, the HIP published a report that established that the people who died could have been saved, despite what was concluded in the original investigation.

Two more investigations were set up in the wake of the HIP’s report, the first being Operation Resolve, which led to another prosecution case against Duckenfield. Despite the former police officer admitting that it was his actions that caused the death of the 97 Liverpool FC fans, the first trial ended with a hung jury, and the second saw him acquitted of all charges.

A second investigation was carried out by the Independent Office for Police Conduct in 2017, which resulted in charges brought against four men who amended police statements after the tragedy occurred. However, the trial collapsed halfway through and they were not convicted.

Despite this, a second set of inquests in 2016 gave the families the verdict they’d been hoping for. A jury found that the 97 fans who died as a result of the Hillsborough disaster were “unlawfully killed and a catalog of failings by police and the ambulance service contributed to their deaths,” as the Guardian wrote at the time.

In May 2021 two former South Yorkshire police officer were acquitted on charges of perverting the course of justice, per the Guardian.

More than 32 years after the tragedy, Williams’ tireless campaign for justice is being further remembered in Liverpool and throughout the UK with ITV’s dramatisation. In December 2021, a tribute mural of Williams was created in Anfield, Liverpool, where she is considered a hero and beacon of hope for all those who were affected by Hillsborough.

More like this
Gen Z Are Twice As Likely To Identify As Queer, According To New Data
By Sam Ramsden
Here’s Where The NHS Nurses’ Strike Currently Stands
By Sophie McEvoy
'Brookside' Is Coming Back & Soap Opera Fans Are Going Wild
By Sam Ramsden
What The UK Blocking Scotland’s Gender Recognition Bill Means
By Sam Ramsden
Get The Very Best Of Bustle/UK
Sign up for Bustle UK's twice-weekly newsletter, featuring the latest must-watch TV, moving personal stories, and expert advice on the hottest viral buys.