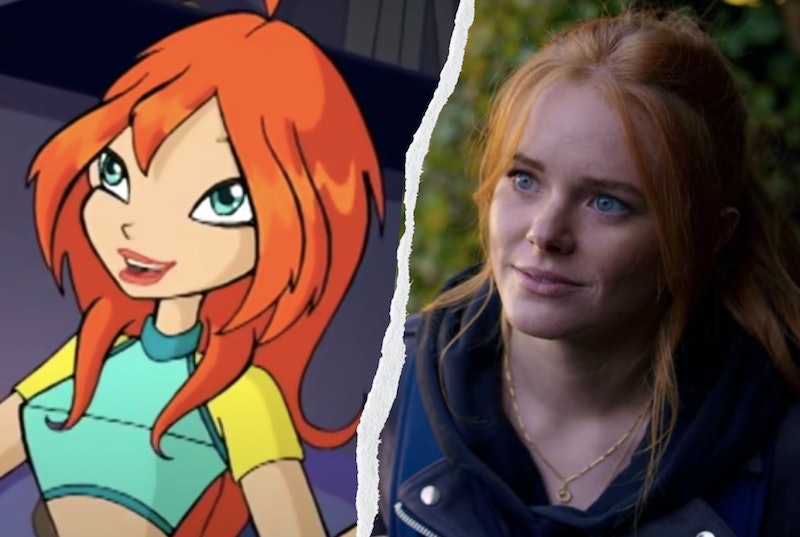 Live action remakes of cartoons are nothing new. From 101 Dalmations to Scooby Doo, it seems like every one of our childhood favourites have been reincarnated as a live-action iteration. The latest? Netflix’s new teen drama, Fate: The Winx Saga, which is based on Nickelodeon’s Italian/American hit animated series Winx Club, first broadcast in the early '00s. But there are some differences between the YA drama and the animated original. Sure, it's not a cartoon anymore, but it’s also edgier and grown up. So, how close is Netflix's Fate to the original Winx cartoons?

Well, much like the cartoon, Fate: The Winx Saga still follows the story of Bloom (Abigail Cowen), a Californian girl sent to Alfea College, an institution in the Otherworld made for fairies to learn to hone their magical gifts. While OG fans of the animated series will recognise her friends Aisha (Precious Mustapha), Musa (Elisha Applebaum), and Stella (Hannah van der Westhuysen) from the Winx Club days, the inclusion of earth fairy Terra (Eliot Salt) and the mysterious Beatrix (Sadie Soverall) are new additions to the Netflix series.

However, a few key characters are missing, which didn’t go unnoticed by fans. Earth fairy Flora, technology fairy Tecna, and Roxy, a fairy of animals, didn’t make the crossover to the live-action adaptation. At least, not for the first season.

When the casting for the Netflix show was first revealed, some fans were quick to criticise the casting decisions for Terra and Musa, accusing the show of whitewashing as Terra seems to have replaced Winx Club’s Flora, who had a Latina background, and Musa is an East Asian fairy in the cartoon version. The team addressed the Terra/Flora confusion in episode one when Terra says that Flora is her cousin, explaining their similar powers.

Speaking to The Wrap, Cowen, who plays Bloom in the Netflix series, explained that Flora isn’t actually in this series. “I know that there is some confusion about that — in the first season, she’s not [there],” she explained. “I think the misconception is that Eliot’s character is Flora. But Terra is brand new, she’s reimagined.

“If we are lucky enough to get a second season, I think Flora would be brought in and I would definitely welcome that,” she added. Cowen explained that while she cannot “speak to the casting process” as she was not involved in that aspect, she thinks it’s important that to be having these conversations: “If the series does go to a second season, I think hopefully these concerns are something that can be addressed, because I do think diversity both in front of and behind the camera is vital and much-needed throughout the industry and internationally.”

Elsewhere, other subtle character differences include Musa’s powers – she is a fairy of music in Winx Club, but an empath in Fate – and the element of royalty; only Stella (and – spoiler alert – potentially Bloom) is a princess in Fate, but in the original Winx Club, all of the main characters – including Musa, Aisha and Sky – descend from royalty.

Speaking of Sky… it wouldn’t be a true YA series without the teenage-angst and drama of a love triangle now would it? In Fate, Sky is Stella’s ex-boyfriend, and he gets caught between her and Bloom in a will-they-won’t-they story arc. However in Winx Club, Bloom and Sky are an “end game” couple from the start.

Adding to the Netflix series’ darker tone is the introduction of the Burned Ones, a new set of deadly creatures, as enemies for its protagonists to face off against. The Burned Ones appear after a 16-year absence and have the ability to infect people, which eventually transforms them into a Burned One with no recollection of their past life. The Burned Ones weren't present in the original cartoon.

One of the more glaringly obvious differences between the two iterations is the lack of wings. Traditional fairy fans will be disappointed to hear that there is not a single pair of wings in sight in the Netflix adaptation. “We had wings in the past… as we’ve evolved, transformation magic has been lost,” Ms Dowling, Headmistress of Alfea, explains in the first episode. However, while there may be a lack of wings, Bloom does so some amazing flying (of sorts) in the finale episode – but I leave you to watch it for yourselves.