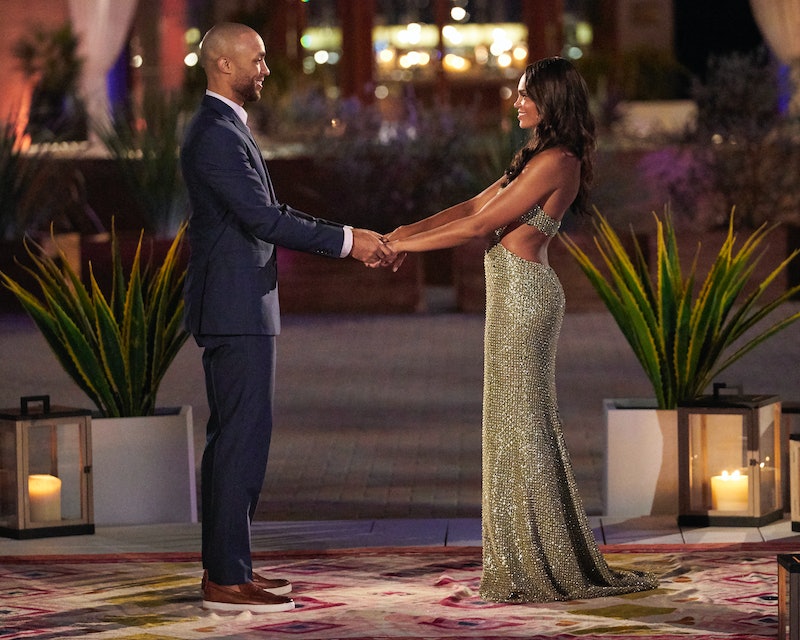 If Bachelor Nation learned anything from the most recent season of Paradise, it’s that if you come onto the show with a previously established connection, things can go really wrong, really quickly. Just ask Pieper and Brendan or Alana and Chris.

That lesson reared its head once again during the Oct. 19 premiere of The Bachelorette when Michelle was greeted by Joe Coleman. Heading into the show, Joe and Michelle already had a lot in common: they’re both 28-year-old former college basketball players from Minnesota (Joe is from Minneapolis, while Michelle is from the nearby town of St. Louis Park). It stands to reason, then, that they would have crossed paths before, and Michelle soon confirmed as much. After Joe introduced himself, Michelle remarked, “Wait, do I know you?”

Following a commercial break, Michelle revealed to co-hosts Tayshia Adams and Kaitlyn Bristowe that she and Joe had exchanged DMs before the show, but that he ghosted her after several messages. When Tayshia and Kaitlyn asked Michelle how she felt about Joes showing up, she admitted she was “kind of interested.”

Later, Michelle pulled Joe aside for a one-on-one conversation. Michelle initially gave Joe a hard time, expressing that she was surprised to see him walk out of the limo given that he “forgot to hit send” all those months ago. But Joe was apologetic about his lack of communication and revealed that he just wasn’t ready to open up to someone when they started talking. It was around the time that George Floyd was killed by police, and he was overwhelmed by the state of his community. Michelle added that as a Black woman, it was something she could have related to, but that she understood where he was coming from. Ultimately, he said he truly came on the show for Michelle and was eager to pick up where they’d left off.

Near the end of their conversation, Michelle let Joe know that she appreciated his openness and willingness to improve his communication. Their conversation seemed to end on a hopeful note, though Michelle mentioned she still had some hesitation that he might shut down again. “I want to make sure [my heart’s] getting taken care of too,” she told him.

Leading a season of The Bachelorette is difficult enough without having to confront a guy who already ghosted you. Joe certainly has a tall mountain to climb if he hopes to mend things with Michelle, so hopefully he can improve his communication to build their connection. Otherwise, Michelle may be hitting “send” home. For now, though, he’s made it to the next rose ceremony.