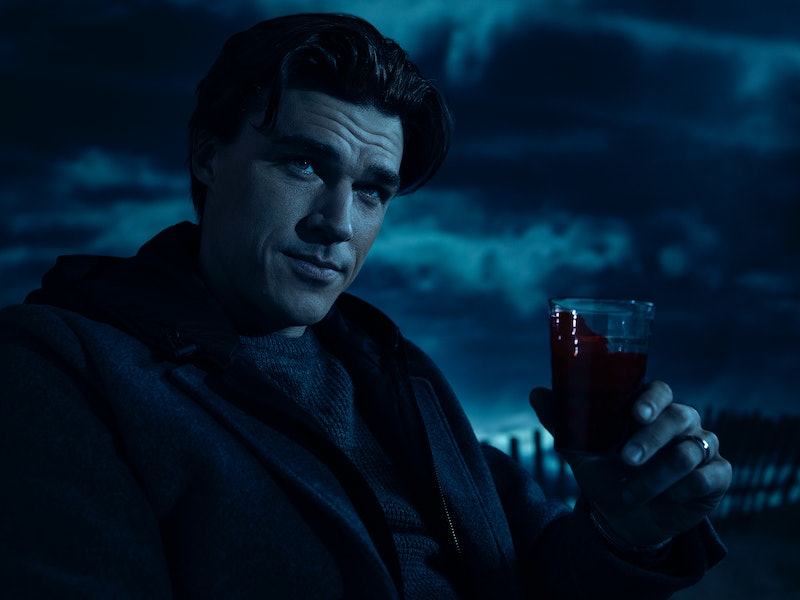 It doesn’t take long for the Gardners’ stay in Provincetown, Massachusetts to turn dark. In the first two episodes of American Horror Story’s 10th season, struggling writer Harry (Finn Wittrock), his pregnant wife Dorris (Lily Rabe), and their violinist daughter Alma (Ryan Kiera Armstrong) journey to New England so Harry can get over his writer’s block. Their first day there, Dorris and Alma are ambushed and chased home by a tall, sickly pale man in a trench coat; later, Harry is attacked in their home by a similar figure. Both times, the police dismiss the incidents as symptomatic of the town’s ongoing opioid crisis; they’re just people struggling with substance abuse who are looking for a fix. But it turns out that the attacks are the result of an even more dangerous kind of pill.

The Gardners are just about to leave town when Harry receives a call from a a Tony-winning playwright he met named Austin (Evan Peters), who swears he has a cure for his writer’s block. Intrigued, Harry visits Austin, who gives him a baggie of black pills later dubbed “muse.” Austin is skeptical and leaves frustrated. But after returning home and receiving a call from his agent — who says the pilot he’s working on is his last chance at saving his career — he downs one of the pills in front of a hiding Alma.

The effect is immediate: Harry spends most of the second episode glued to his computer pumping out a brilliant pilot script. His wife and daughter are shocked by his vigor, and a little worried about his lack of appetite. As suspected, there are strange side effects. Harry finds himself craving blood and begins straining the juices from copious amounts of raw meat in order to satiate his hunger. Later, he goes back to Austin’s to demand answers.

Austin explains the pills were invented by a mysterious “chemist” and only work on people with real artistic talent. The gaunt creatures wandering around town are “hacks” who took the pills but didn’t reap the intended benefits. The catch? The pills deplete critical minerals in users’ blood, and they must kill and feed at least once a week in order to restore them. As Austin puts it, “Cartons of cow meat aren’t going to cut it. You’re going to need that fresh, warm stuff from something that has opposable thumbs.” Harry rejects the idea, but Austin warns that now that he’s taken the pills, he won’t be able to write anything without them.

Muse’s stranglehold on Provincetown is largely thanks to the region’s problem with opiates, as police write off muse-related murders as casualties of the epidemic. Sarah Paulson’s character, a drug user and drifter who goes by the unfortunate moniker of “TB Karen,” runs into Harry several times and aggressively warns him to stay away from Austin and Belle (Frances Conroy), another user of muse. Obviously her advice goes unheeded, but we also learn that TB Karen has been providing live flesh for Belle to snack on. In return, Belle keeps TB Karen safe from the negatively afflicted muse users.

Belle also provides Mickey (Macaulay Culkin) — a local sex worker — with drugs in exchange for blood from his wrist from time to time. Near the end of Episode 2, Mickey reveals to Karen that he swiped some muse from Belle. Once a talented painter, Karen is enticed by the possibility of taking muse, but decides against it after much deliberation. Mickey takes them, saying that anything is better than his current life — even becoming one of the pale walkers.

Meanwhile, Harry decides a life of murder is worth it in exchange for status and success. He joins Austin and Belle as they target and devour a local drug user, and later gets outfitted for a pair of sharp-toothed dentures for more effective feeding. Back at home, Alma secretly takes one of her father’s pills in order to improve her violin skills — and ends the episode feasting on a rodent in the middle of a cemetery. Whether or not she has true talent or will turn into a ghoulish monster, we’ll have to wait and see.

More like this
Kathy Hilton’s 'RHOBH' Controversy Wasn’t Entirely Caught On Camera
By Jake Viswanath
'House of The Dragon' Episode 6 Will Take Place A Decade After Episode 5
By Kadin Burnett
The ‘Emily In Paris’ Season 3 Release Date Is Here, Plus The First Footage
By Bustle Staff
The ‘You’ Season 4 First Look Shows Joe’s New Identity And Potential Victims
By Bustle Editors
Get Even More From Bustle — Sign Up For The Newsletter