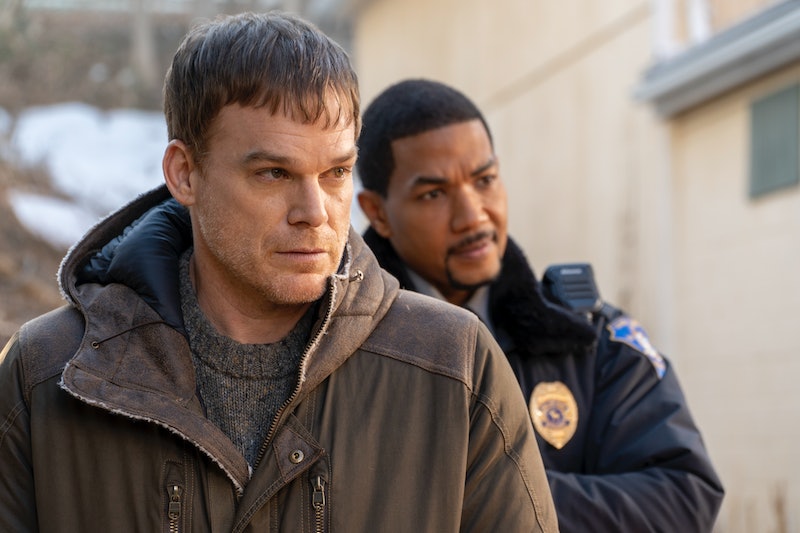 Six years before Game of Thrones infuriated fans with its ending, Showtime’s Dexter set the template for a controversial series finale. Though the show had admittedly declined in quality since Season 4, the final episode hit a new low, with Dexter’s new life as a lumberjack turning into a punchline that permanently tainted the legacy of the series. Eight years later, it’s unclear how much of an appetite there is to continue a story that ended on such a sour note, but Showtime clearly thinks there’s enough of one: a new eight-episode revival subtitled New Blood will premiere on the network on Nov. 7.

When deciding what direction to take the new series, the writers had a tricky line to walk. Hew too close to the derided ending and no one would be interested, but try to retcon it and risk confusing audiences who remember all too well where Dexter was last time we saw him: chopping trees in Oregon.

It wouldn’t be the first time a horror franchise had erased its history; for example, 2018’s Halloween movie served as a direct sequel to the 1978 original, wiping the slate clean by completely ignoring all nine intervening films. However, New Blood creator Clyde Phillips (who also wrote for the original show) instead came up with a compromise that neither ignores the finale nor remains slavishly devoted to it.

While only eight years have elapsed since Dexter wrapped in September 2013, a full 10 years have gone by in the world of the show when New Blood picks up. Dexter has long moved on from his life as a lumberjack and is now working as a shopkeeper across the country in the fictional town of Iron Lane, New York, where he goes by the name Jim Lindsay (a reference to author Jeff Lindsay, whose books inspired Dexter).

There, “Jim” is surrounded by an almost entirely new cast of characters including Angela Bishop (Julia Jones), the town sheriff and Dexter’s love interest; Edward Olsen (Fredric Lehne), an oil baron with a secret; and Kurt Caldwell (Clancy Brown), a wealthy father determined to find his missing son. In fact, Phillips views New Blood as so far removed from Dexter that he prefers to think of it as a separate show.

“One of the things that we all agreed on — and Michael [C. Hall] really insisted on and he was completely right — is that this not be Dexter Season 9,” Phillips said at the show’s San Diego Comic-Con panel this July, as reported by Polygon. “That we acknowledge that this is not the next moment after the lumberjack moment. That we acknowledge the truth, that time has passed, almost 10 years have passed, and we pick up Dexter in another place, in another world actually, as far away from Miami as possible.”

That’s not to say there are zero connections to the original series. Jennifer Carpenter returns as Deb, this time as a ghost haunting Dexter’s subconscious after dying in the series finale. And Dexter’s son Harrison — who was last seen as a kid being whisked off to live a new life in Argentina by Dexter’s love interest Hannah — is back after a long absence, now being played as a teen by actor Jack Alcott.

But as much as Dexter’s world has changed, New Blood has to acknowledge how much the world it’s premiering to has too — including how our society reacts to shows about bad men doing bad things and to depictions of violence against women. The age of antiheroes like Dexter is behind us, with nice guys protagonists like Ted Lasso stepping in for the Don Drapers and Walter Whites of years past. Phillips insists that New Blood will keep up with the shifting tides. “We touch upon many modern subjects — the opioid crisis, school shootings, how Indigenous people are treated in this country,” he told Variety. “We are doing our damnedest to be as contemporary as possible.”