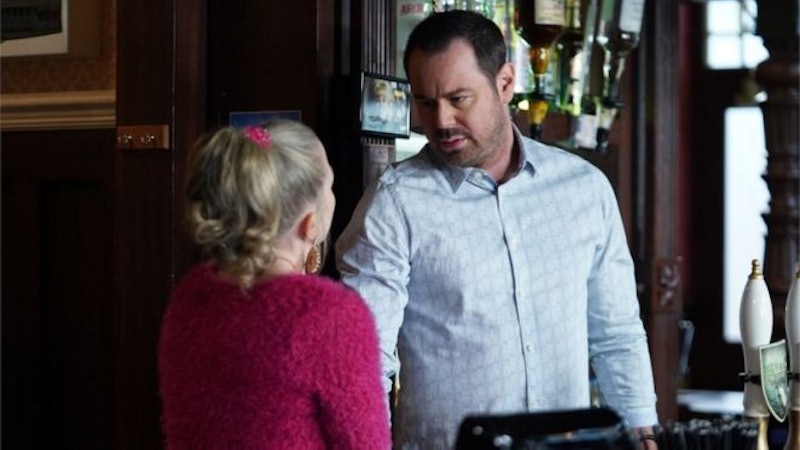 After a three-month break due to COVID-19, EastEnders will finally be back on screens next month. Filming resumed on set in June and the soap has taken some rather creative steps to ensure the cast and crew remain safe. To that end, EastEnders has hired real couples to act as body doubles when filming kissing scenes. Per BBC, the move allows "moments of intimacy to be cheated" when the soap resumes.

After lockdown put production on pause, the soap had to adopt many new measures to observe social distancing — even the Queen Vic' is a 2m apart zone, says the BBC.

"We hit on the idea of [using] supporting artists from the same household to reflect the world outside.... or a husband and wife who would be walking down Bridge Street and of course they can get closer together than the two metres," he said to BBC News.

"Our greatest challenge is that we have several family units, that's the nature of EastEnders and soap," explained the producer to BBC.

"Families who would be in the same household, so not at 2m distances, but obviously they are played by actors who are obeying social distancing, so there's a huge challenge at the heart of it."

EastEnders will also use computer-generated effects to give the "illusion" of actors being close to each other, filming scenes multiple times with the actors in different positions, and editing the shots together to make it look like the actors were sat next to each other all along. Perspex screens have also been introduced to allow actors to work more closely together.

Actors are also expected to do their own hair and make-up, and a one way system has been introduced, not unlike the way shops operate.

Alongside social distancing, actors in their 70s with underlying health conditions aren't required on set, confirmed the soap. So, it'll be a while before we see the return of William Roache and Maureen Lipman.

EastEnders will return four nights a week from September 7.