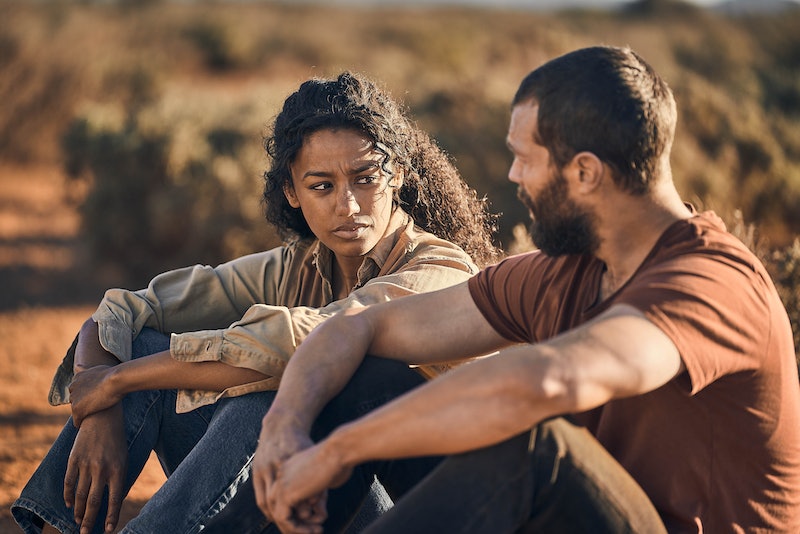 Bafta nominee Jamie Dornan (The Fall) is set to hit the small screen once again as The Man, a British traveller desperately searching for the truth about his identity in the new BBC One drama The Tourist. Joining Dornan on the small but thrilling screen is Line of Duty‘s Shalom Brune-Franklin, who takes on the role of Luci in the six-part show, but how does her character Luci know The Man? And how does she fit into his journey to find who he is?

The Tourist’s explosive opening throws the audience straight into the action from the start. Set against the glowing red heart Australian outback, The Man is seen driving the dusty roads before being hounded by a tanker truck in an attempt to drive him off the road. “An epic cat-and-mouse chase unfolds and the man later wakes in hospital, hurt, but somehow alive,” the BBC teases. “Except he has no idea who he is.”

Part of The Man’s search for his identity takes him to a small-town diner in the middle of nowhere, where he meets a waitress, Brune-Franklin’s character, Luci. Much like the “shocking, surprising, funny and brutal turns” in the rest of The Tourist’s journey, there are definitely some twists in store for the relationship between Luci and The Man. Whilst there isn’t much to go on in the first episode, Brune-Franklin is billed as a starring actor so we can definitely expect more from her character throughout the limited series.

More like this
Helena Bonham Carter Doesn't Think 'The Crown' “Should Carry On"
By Sam Ramsden
Everything To Know About The 'Daisy Jones & The Six' TV Series
By Maxine Harrison and Brad Witter
'Magpie Murders' S2 Will Include A *Major* Shake-Up
By Sophie McEvoy
The Song At The End Of 'The Last Of Us' Ep 1 Has A Deeper Meaning
By Sophie McEvoy
Get The Very Best Of Bustle/UK
Sign up for Bustle UK's twice-weekly newsletter, featuring the latest must-watch TV, moving personal stories, and expert advice on the hottest viral buys.