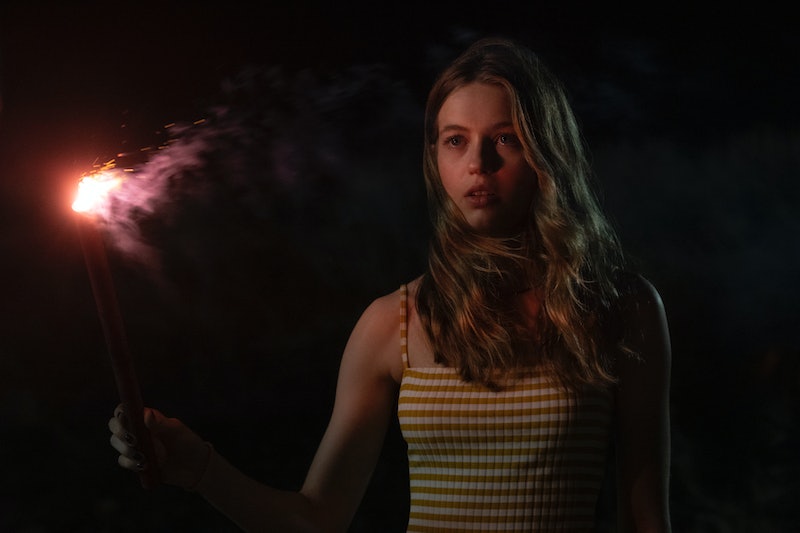 The last few years have brought readers copious page-to-screen adaptations, and 2021 isn’t shaping up to be any different. Prime Video’s Panic, based on Lauren Oliver’s 2014 novel of the same name, is this summer’s thrilling new series. It promises plenty of twists and turns — and it’s also got YA fans struggling to remember how Panic ends. For those who need a quick refresher on the book, we’ve got a complete guide for you below. Major spoilers for Panic follow.

Set in the fictional town of Carp, New York (pop. 12,000), Panic follows one group of ambitious and desperate high-school seniors as they compete in the titular Panic — a winner-take-all series of increasingly dangerous challenges. It’s a time-honored tradition in Carp, even if it is illegal, and no one dares to rat out anyone involved, including the two anonymous judges who preside over each year’s contest. This year’s $67,000 pot is the biggest Panic prize to date, and it’s enough to buy any of the competitors a one-way ticket out of Carp, where the teenagers are surrounded by drugs, booze, and bad parenting.

Participating in this year’s competition are: Heather, the child of neglectful parents, who joins Panic in an attempt to win back her ex-boyfriend’s affections; Nat, who plans to use the money to achieve her dreams of stardom; Ray, who wants to follow in his older brother, Luke’s, footsteps by taking home the prize; and Dodge, an unassuming kid who wants to avenge his sister’s Panic-related injuries by killing one of his fellow competitors.

The Panic begins with the Opening Jump: a 40-foot freefall into a local lake in the dead of night. Heather comes to cheer on her BFF, Nat, but when she sees her ex getting cozy with another girl, she decides that taking part in Panic is the best way to get him to take her back. She makes the Opening Jump — much to the chagrin of her and Nat’s friend, Bishop, who thinks neither of them should compete. With that, Panic begins.

After Nat is injured on the sidelines of a fight at the second challenge, she quickly forms an alliance with Dodge to ensure their mutual success, opting to split the prize money if either of them wins. The money is just the icing on the cake for Dodge (who also made the same deal with Heather). He joined for the sole purpose of avenging his sister, Dayna, who was paralyzed two years ago in the Joust: a chicken match that serves as the final Panic challenge each year. Dodge knows that Dayna only lost the Joust because Luke tampered with her car, and plans to kill Luke’s younger brother Ray in the same way.

After the third challenge, in which 10 competitors steal a local gun-nut’s belongings from his home, the police issue public warnings that anyone caught participating in Panic will be arrested and tried. Things only escalate, however, as the fourth challenge — staying the night in an abandoned house — ends in arson and the death of an innocent bystander.

Heather, Dodge, and Nat manage to escape the wreckage of the fourth challenge with their lives, but Heather is hospitalized following the house fire. She bows out of the competition when the police suspect she’s involved with Panic, but soon changes her mind when she runs away, freeing her 12-year-old sister from the confines of their abusive home.

There’s not much of a competition left, however. Panic’s judges have gone eerily quiet. Fearing that he’ll miss out on his chance for revenge, Dodge teams up with Ray to terrorize Panic contestants in a bid to force the judges’ hand. It works, and Panic resumes with individual challenges for each competitor.

Nat fails her challenge, which involves staying in a tiger pen on Heather’s employer’s property. The tigers escape in the aftermath, and one animal is killed. Wracked with guilt over his involvement in the tiger’s death, and fearing the worst for Heather, Bishop confesses to police that he’s a Panic judge.

Nat’s loss leaves three remaining students — Heather, Dodge, and Ray — to compete in the Joust. In a bid to stop Dodge from murdering Ray, Heather and Luke restrain him in Nat’s basement, and Heather faces off against Ray in Dodge’s car. Unbeknownst to everyone else, Dodge planned to swap cars with Ray before the Joust began, and he loaded his vehicle up with napalm ahead of the challenge.

Dodge’s car catches fire during the Joust, causing Heather to wreck, but not before Ray swerves out of her way — a move that automatically disqualifies him and guarantees that Heather will win. Heather escapes the explosion just in time, and she’s reunited with the still-missing tiger in the woods. She, Dodge, and Nat share the prize money, and she later kindles a new romance with Bishop.

More like this
Everything To Know About The 'Daisy Jones & The Six' TV Series
By Maxine Harrison and Brad Witter
A 'Terminal List' Sequel & Spinoff Are Reportedly In The Works
By Kadin Burnett and Grace Wehniainen
Netflix Shut Down 'Bridgerton' S3 Rumours About A “Very Dark” Storyline
By Bustle
The Plane Crash In 'Dear Edward' Is Based On A 2010 Tragedy
By Grace Wehniainen
Get Even More From Bustle — Sign Up For The Newsletter
From hair trends to relationship advice, our daily newsletter has everything you need to sound like a person who’s on TikTok, even if you aren’t.