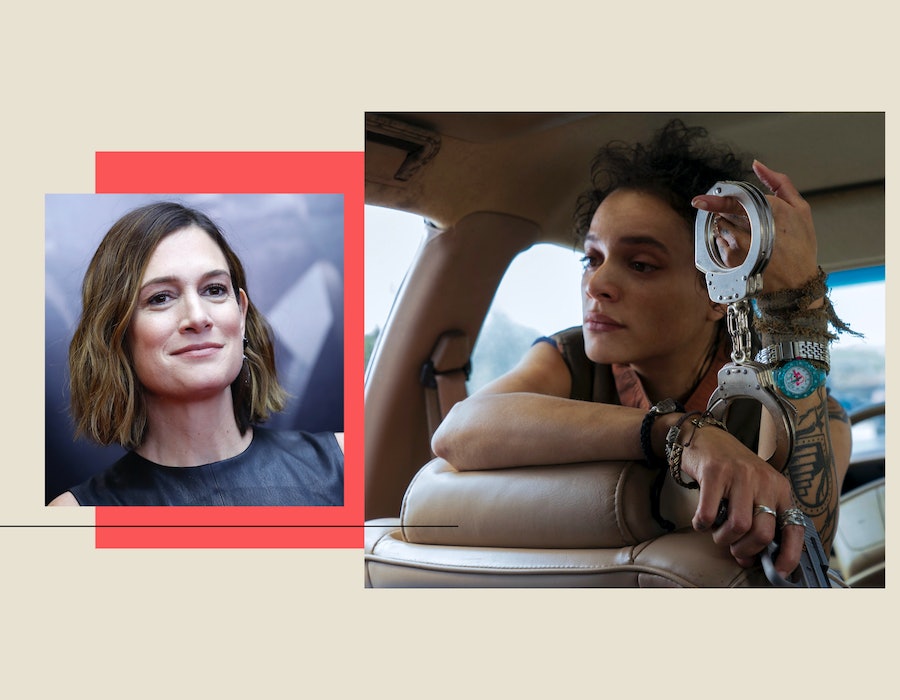 Nothing is black and white in Gillian Flynn's new TV series Utopia, and that's exactly the way she likes it. An adaptation of Dennis Kelly’s 2013 cult TV show of the same name, Utopia follows a group of nerds who acquire their favorite comic book — also called Utopia — and realize it's capable of predicting humanity-ending epidemics. Forced on the run by the villainous Mr. Rabbit, they strike up an uneasy alliance with brutal warrior Jessica Hyde (Sasha Lane), fearing at every step that she might turn on them, too. Full of violence, terror, and constantly shifting loyalties, Utopia is far from predictable. But as Flynn explains to Bustle, she's never been interested in clear-cut stories with conventional heroes.

"I've always loved antiheroes," she says. "I love that sensation of finding a kinship with someone who's doing bad things." In many ways, Utopia is a story well suited to Flynn's oeuvre. The former Entertainment Weekly journalist-turned-novelist is known for her thrillers full of blood, trauma, and morally ambiguous (or downright villainous) women — three things that Utopia has in abundance. Her first two novels, Sharp Objects and Dark Places, both centered on deeply flawed and haunted women, and Gone Girl's scheming sociopath Amy Dunne made Flynn a household name. It was David Fincher, who directed the adaptation of Flynn's novel Gone Girl, who ended up introducing her to Kelly's Utopia, and Flynn's mordant writing was the perfect complement to Kelly's black humor. Utopia was picked up by Amazon, and it marks Flynn's first time as a showrunner — a job she notes is very similar to novel writing in that she's still in charge of each aspect of the project.

"I love that sensation of finding a kinship with someone who's doing bad things."

Though Flynn doesn't believe in remaking things "just because the original was really great," in Utopia she saw an opportunity to create a modern conspiracy thriller like The Parallax View or All the President's Men. While Kelly's Utopia confronted sterilization and overpopulation, Flynn's Utopia plays out in the shadow of an increasingly fast-spreading pandemic (the timing of the show's release amid a real-life pandemic is chillingly coincidental). Pharmaceutical bigwig Dr. Christie (John Cusack) literally deals in fake news and conspiracy theories, fabricating stories, whipping up public sentiment, and mocking government officials for his own material benefit. Even main characters Becky (Ashleigh LaThrop), Ian (Dan Byrd), Samantha (Jessica Rothe), Wilson Wilson (Desmin Borges), and Grant (Javon “Wanna” Walton) are not immune to this, often spouting their own conspiracy theories and later accusing Mr. Rabbit of releasing a vaccine that's secretly a virus.

It's this fraught political climate that Flynn was interested in exploring. "We're at a place where truth has become very slippery, and in many cases, we're not even agreeing on the idea that there is such a thing as truth," Flynn explains. "You can go down the rabbit hole on social media and on your news feeds and really get reinforced in whatever you want to believe. It puts us in a very slippery position as a society if we don't have even have a basic shared agreement that there are certain things that are true and verifiable."

Flynn notes that she "never thinks of [her] characters as heroes or villains," and Utopia presents all sides of these arguments without commentary, leaving it up to the viewer to decide who to side with. While this may leave the door open for possible misinterpretation, the story is always driven forward by the no-nonsense Jessica Hyde, who's so single-minded in her focus to take down Mr. Rabbit that she's able to cut through the noise. A terrifying figure sprung straight from the pages of a graphic novel, Flynn describes Jessica as "someone you can't entirely trust, who will kill you if she finds it necessary." An adept and highly paranoid assassin who won't even shower if it means leaving herself vulnerable, Jessica is the exact kind of messy character that Flynn finds intriguing.

"Jessica is someone who finds human beings fungible when this series starts out," she explains. "Humans are just a means to an end for her, and she doesn't really even understand that idea of having a separate life that's worthwhile."

Near the end of the second episode, there's a twist so shocking that it threatens to make Jessica forever irredeemable to the audience. But Flynn pushes back on the idea that Jessica has to be likable in the first place. "I've always rebelled against the word 'unlikable' because it's usually applied to female characters," she says. "My thought is, have you seen Sopranos, or Mad Men, or Breaking Bad? No one said, 'Oh, but they don't do nice things.' I've never believed that women need to be coddled as far as needing to have a woman to root for. I think the question should be less, 'Is this character likable' and more, 'Is this character interesting'? Do you want to talk about them? And do you want to see what they do next?"

Jessica Hyde is certainly a memorable character, literally fighting tooth and nail in a world that's tilted completely off its axis. It's a lot to handle at times, but ultimately Flynn would rather be audacious than forgettable. "I've never been offended if people have vehement negative reactions to what I write," she says. "I would much rather write something that gives people a reason to talk and debate than write something and people go, 'Oh, I liked it,' and never really think of it again."

More like this
Everything To Know About The 'Daisy Jones & The Six' TV Series
By Maxine Harrison and Brad Witter
Netflix Shut Down 'Bridgerton' S3 Rumours About A “Very Dark” Storyline
By Bustle
Here’s What Happens To Bill & Frank In 'The Last Of Us' Video Game
By Brad Witter
All The ’70s Easter Eggs You Missed In 'That ’90s Show'
By Grace Wehniainen
Get Even More From Bustle — Sign Up For The Newsletter
From hair trends to relationship advice, our daily newsletter has everything you need to sound like a person who’s on TikTok, even if you aren’t.