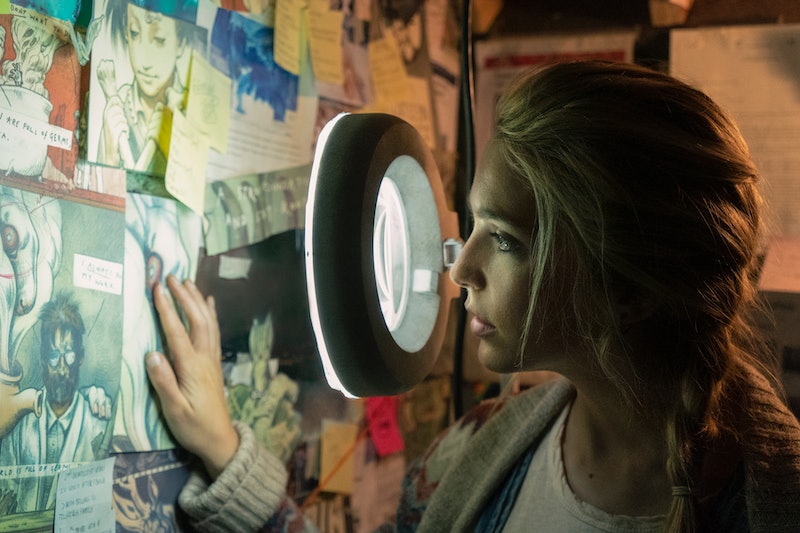 In Gillian Flynn's Amazon Prime thriller Utopia, the eponymous comic book is arguably the most important character. The show centers on a group of comic book fans who bond over deciphering the Dystopia and Utopia comics' symbols, which seem to predict real world epidemics. It's not long before they realize their conspiracy theories are true, and Utopia's events are as real as its protagonist Jessica Hyde (Sasha Lane). Of course, Utopia is not a real comic book in our world, but you can follow the work of the real life illustrator behind the comic's imagery, Brazilian artist João Ruas.

As Flynn explained at the 2020 virtual Comic-Con, she always wanted Utopia to center around an actual graphic novel that could be seen and explored if one were to pause the video. Flynn wanted a physical piece of art to literally illustrate why Utopia inspired such an obsessive fanbase, which meant finding an artist capable of creating mesmerizing and eerie imagery. That search eventually led her to Ruas, whose dark and surreal work was the perfect complement to the mythos of Utopia.

The São Paulo-based Ruas credited comic strips as his first exposure to art, per a 2009 Sour Harvest interview. "The first thing I remember drawing were Peanuts characters," he said.

Ruas grew his love for art through comic books, and eventually went on to create the cover art for Bill Willingham's Fables, a comic published under DC Comics' Vertigo imprint. Ruas took over from artist James Jean, a move he admitted he was initially nervous about. "I knew my work would be instantly compared to James’, [and] I was afraid to get a stamp on my forehead and pretty much destroy my almost unborn career," he explained. "After a while though, I thought I needed to do it for myself really, to prove for me that I could handle that pressure."

Fittingly, Utopia is another example of Ruas following in another artist's footsteps. Flynn's show is an adaptation of Dennis Kelly's Utopia, a British black comedy thriller that aired from 2013 to 2014 on Channel 4; UK artist Paul Miller created the artwork for Kelly's version. But in this version of Utopia, Ruas' work becomes a character all its own. It's a tapestry that characters Sam (Jessica Rothe), Becky (Ashleigh LaThrop), Ian (Dan Byrd), and Wilson (Desmin Borges) pore over in search of clues for what the villainous Mr. Rabbit is planning next. Pandemics like the Ebola virus in Africa, the 1918 Spanish flu, the Zika virus, and SARS outbreak of 2003 are referenced in Ruas' drawings through minute details like the shape of a leaf or a bat wing.

Ultimately, Ruas' Utopia is not a real comic that's available to the public, but if Ruas wants to create one that contains clues to preventing the next pandemic, we're all ears.