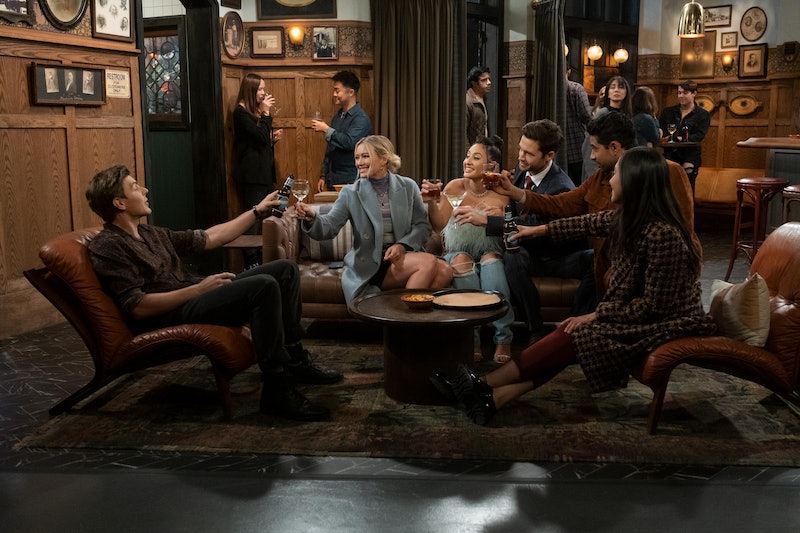 Light spoilers ahead for the premiere episode of How I Met Your Father. After months of speculation, we finally know how How I Met Your Father is connected to How I Met Your Mother. In the final moments of the new Hulu spinoff’s premiere episode, Sophie (Hilary Duff) compliments her new friends Jesse (Chris Lowell) and Sid (Suraj Sharma) on their apartment. “Thanks. It was a total score. We got it from this old married couple who posted it on the Wesleyan alumni group. We even got them to leave their swords,” Jesse replies.

Yes, kids, he and Sid are living in Wesleyan alums Ted and Marshall’s original apartment above MacLaren's Pub from HIMYM. Throughout the original CBS series’ nine-season run, the Manhattan apartment was also home to several other characters, ending with Marshall and Lily in 2016. And, yes, they’re also those famous swords, which contributed to HIMYM mayhem ranging from Lily’s accidental stabbing in a duel to the destruction of an expensive bottle of Scotch.

Easter Eggs like these will continue to appear throughout HIMYF’s first season, which is primarily set in 2022. In March, Duff even teased some potential “fun guest appearances from the original cast” on SiriusXM's The Jess Cagle Show. Still, the actor has been clear that HIMYF and HIMYM are otherwise separate entities. (MacLaren's Pub is replaced by Sid’s bar, Pemberton’s, for example.)

“We are our own show. The original show was so amazing and they were so tied into one another, but this is its own show,” Duff told reporters during a recent appearance for the virtual Television Critics Association winter press tour, per Entertainment Tonight. “We’re trying to create something original by stealing a few things from them that worked really well.”

Some of the creative team is the same, too. HIMYM creators Craig Thomas and Carter Bays serve as executive producers for HIMYF, and the pilot episode was directed by Pam Fryman, who directed 196 of the original show’s 208 episodes. “One thing that I can take away from it, having been on How I Met Your Mother for so long, is that this is not How I Met Your Mother — and I loved How I Met Your Mother,” Fryman said during the virtual TCA event. “This is How I Met Your Father, and it is so spectacular in its own right…. From the first day on stage with masks on, we started rehearsing and instantly knew we had something.”

HIMYF co-creator Isaac Aptaker echoed those sentiments, insisting that the Hulu series is a “standalone sequel” rather than a reboot. But he insisted that fans of the original series won’t be disappointed: “There are going to be lots of little rewards for people who love the original if they stick with us.”