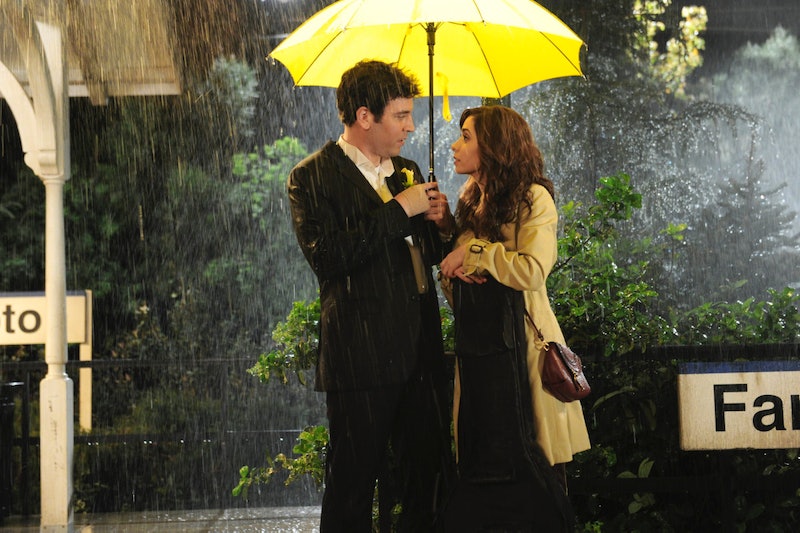 Could this be the alternate How I Met Your Mother ending we've been waiting for? After that disappointing finale back in March, fans caused such a ruckus about the Ted/Robin ending that it was rumored the DVD release of the season would contain an alternate ending. "Not with additional footage, just with some re-arrangements," according to Deadline. And now TV Line says that ending is finally here. The video was originally posted to YouTube but has since been taken down by Fox.

Fortunately the leaked alleged ending has been posted to a few other Youtube accounts as well. In line with the announcement that there will be no additional footage, the clip just shows Ted telling his kids about how he was in the right place at the right time to meet their mother on that rainy Farhampton train platform. The scene ends with Ted and The Mother connecting over the yellow umbrella that they both possessed and then fades to black as narrator Ted says, "And that, kids, is how I met your mother."

It's laughable how much better this ending is than the awful Barney/Robin divorce, Mother's death, and Ted + Robin reunion that the actual ending gave us. All fans wanted was this sweet wrap up to nine years of mystery.

So this video may not be the ending used in the show, but at least we can pretend now. And hey, even if it's not the CBS-approved one, it's still better than the finale we got back in March.