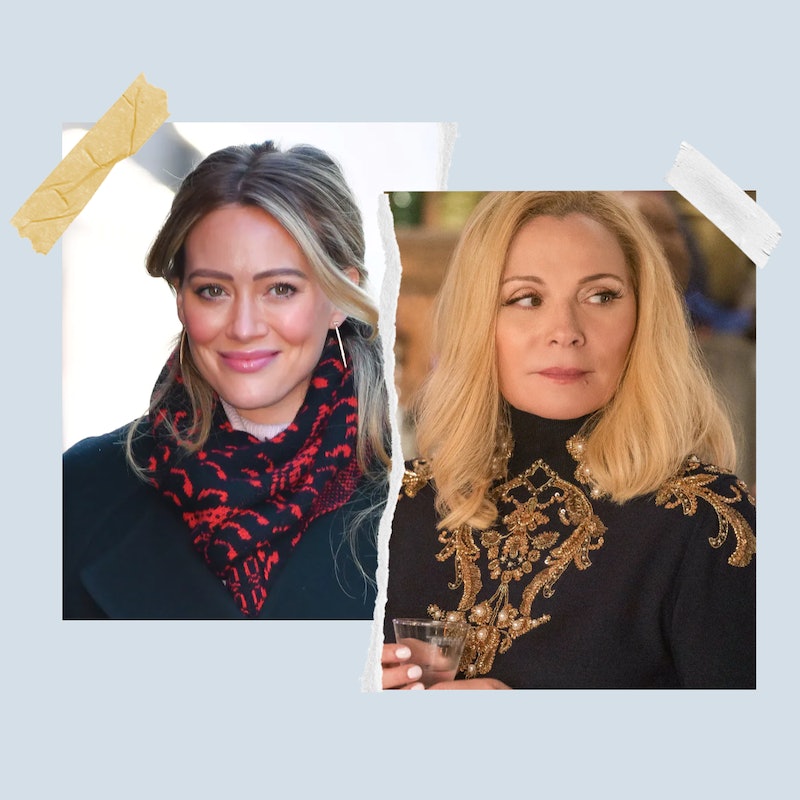 Multiple How I Met Your Mother spinoffs have been in development stages then ditched in the past few years, but finally, one is coming to fruition. Hilary Duff will star in How I Met Your Father, a HIMYM spinoff series that Hulu announced in April 2021. Since then, Hulu has expanded the cast. The latest addition, as of Nov. 5, is Sex and the City and Filthy Rich star Kim Cattrall, who decided to not be part of the upcoming SATC reboot And Just Like That... but will instead join HIMYF.

HIMYF will tell a similar story to its beloved predecessor — except in the complete opposite direction. HIMYM premiered in 2005 on CBS and ran for nine seasons, telling the story of how Ted Mosby (Josh Radnor) met his wife and the mother of his children, who was only revealed in the final season. HIMYF will be connected to the original series in unexpected ways. The Lizzie McGuire and Younger star told SiriusXM’s The Jess Cagle Show on May 6, “I don’t want to give it all away and the script is definitely being changed a little bit, but it does tie in.”

What’s The Plot Of How I Met Your Father?

How I Met Your Father will focus on Sophie (Duff), who is telling her son the story of how she met his father, using the original series’ structure of flashbacks and narrative voiceovers. The spinoff will be set in New York City (but filmed in Los Angeles), just like its predecessor, and “flash back” to 2021, when Sophie and her friends are figuring out their futures, finding out who they are, and navigating the world of dating — dating apps included — in the city.

Duff will also serve as a producer, which will be executive produced by HIMYM creators Carter Bays and Craig Thomas, alongside Isaac Aptaker and Elizabeth Berger (This Is Us; Love, Victor).

As she told Cagle, Duff is most looking forward to meeting her new TV family and is excited to see how Sophie will grow as the series goes on, teasing that she’ll have many options for suitors. “There’s so much opportunity for love stories with this show because it’s Sophie and then three dudes,” she said. “So it's going down that whole rabbit hole of like, well, which one was the one, and who was the father? And you get to go through all of Sophie's young experience of finding love and dating and what that’s like in the modern world.”

Who’s In The Cast Of How I Met Your Father?

After Duff was confirmed for the lead role of Sophie in early May, actor Chris Lowell was announced to be starring alongside her on June 16 via Deadline. Following his appearances in Promising Young Woman and Netflix’s GLOW, Lowell will portray Sophie’s friend Jesse, a smart and edgy guy who is cynical when it comes to love. An aspiring musician, Jesse works as an Uber driver in order to pay his bills.

On Nov. 5, Cattrall announced on Instagram that she will be joining the HIMYF cast. Variety reported that “Cattrall will recur as the future version of Sophie [Duff’s character].”

Additionally, Grown-ish star Francia Raisa is set to play Valentina, Sophie’s roommate and an aspiring stylist. As detailed by The Hollywood Reporter, Valentina is “impulsive and adventurous,” and Sophie counts on her for positive reinforcement when she’s down. At the beginning of the series, she’s just returned from London Fashion Week with Charlie, a British aspiring model played by The Royals actor Tom Ainsley whom she fell in love with during the trip. Charlie’s a kind guy but born to conservative, rich parents; he’s been living in an upper-class bubble his whole life. While THR had reported that Charlie lives with his best friend Tom, the publication later explained that his best bud and roommate is named Sid, played by God Friended Me’s Suraj Sharma. Sid is described as “a new bar owner [who] plays the optimist to Jesse’s cynicism.”

Rounding out the main cast is Space Force actor Tien Tran as Ellen, Jesse’s adopted sister. She’s just arrived in New York after splitting from her wife and leaving their small farming town, a setting better suited for her than the busy NYC bars the friends spend their time at.

There’s no confirmation of whether anyone from the original cast of HIMYM, including Neil Patrick Harris, Cobie Smulders, Jason Segel, Alyson Hannigan, and Radnor, will make a guest appearance or even reprise their roles on the spinoff. But no worries, Duff is already advocating for their return: “Hopefully we’ll have some fun guest appearances from the original cast.”

How I Met Your Father Trailer And Release Date

The first official How I Met Your Father trailer finally came on Dec. 16, and it’s a tale of modern dating and all the chaos that comes with it. “I’ve been on 87 Tinder dates this year,” Duff’s character, Sophie, states. Cattrall also appears as the older version of Sophie, filling the Cattrall-shaped void SATC fans have had for quite some time. And in a blink-and-you’ll-miss-it appearance, Josh Peck of Drake & Josh fame is standing at Sophie’s door.

Season 1 premieres on Hulu on Jan. 18, 2022, and will consist of 10 episodes. Based on Duff’s excitement and this trailer, it will be worth the wait.

More like this
The First Trailer For 'That '90s Show' Includes So Many Nods To The Original Series
By Jack Irvin, Alyssa Lapid and Grace Wehniainen
Khloé Kardashian’s Son Was Born A Week Before Anyone Realized
By Jake Viswanath
Kim K Reveals The Advice Demi Moore & Kendall Jenner Gave Her For A Runway Show
By Jake Viswanath
Kim K Is Putting Kanye’s Memorabilia — Like Grammys & Clothes — In A Vault
By Jake Viswanath
Get Even More From Bustle — Sign Up For The Newsletter