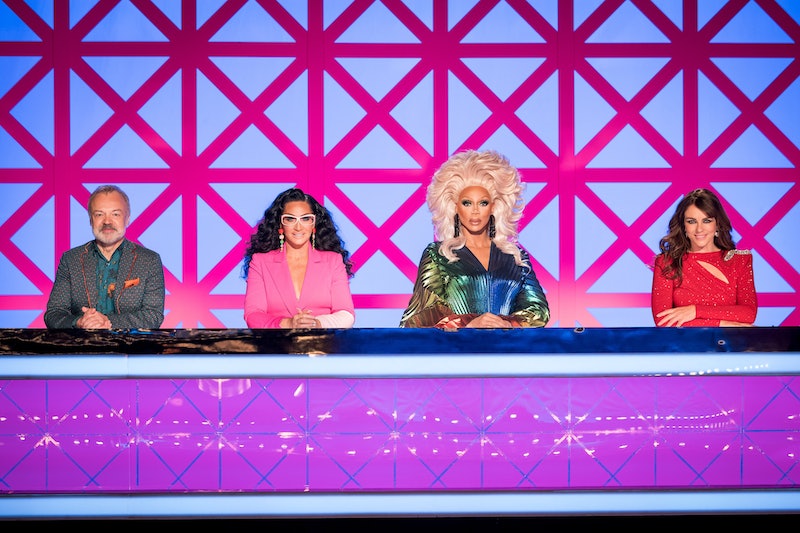 Start your engines Drag Race UK fans, because a fresh dose of show-stopping drag excellence has arrived just in time to help ease your lockdown woes. Yes, Mother Ru is back with a sickening new lineup of queens who are ready to battle it out to be crowned the UK's next drag superstar. News of the show's second run was first announced in late 2019, before the pandemic had caused major disruptions throughout the entertainment industry. But when was Drag Race UK filmed?

As Digital Spy reports, RuPaul's Drag Race UK series 2 began filming in early 2020, and production was temporarily halted in March shortly before the first national coronavirus lockdown. Speaking at the time, a BBC representative said in a statement: "In light of the spread of Covid-19, after much consideration, production on RuPaul's Drag Race UK will be temporarily pausing filming both in consultation with and supported by the BBC." Thankfully, filming eventually resumed in late 2020, and the hit UK spin-off's second series gets underway on Jan. 14 on BBC iPlayer.

During last year's Werk Room shut down, season 2 hopefuls were forced to take a break from the competition before on-set safety restrictions were in place. However, it seems the pause in filming wasn't all bad for some, and lockdown actually worked in some of the queens' favour.

Speaking at a press event over Zoom, comedian and regular Drag Race panellist, Alan Carr, discussed how contestants dealt with the filming disruptions, revealing that some, but not all queens, used their time at home wisely.

"You hope that in that break they got to a sewing machine, they got the old needle out and everything," Carr explained. "Some of them were obviously like 'Wow, ok the standard is that good, right I'm gonna do something about it.' So I was disappointed that some of them hadn't. But wow, the ones that had — oh my god, mind-blowing."

The guest judge added: "They improved, they'd gotten better. Some of them thought 'Nah, I'm alright'."

Despite the production break, cameras were thankfully still very much rolling during lockdown, and the one-off special episode RuPaul's Drag Race UK: Queens on Lockdown is scheduled during the new series, uncovering how the queens spent their time during the break in filming.

More like this
'MAFS UK' Changed The Rules After Matt & Whitney Cheated On Their Partners
By Catharina Cheung
There’s A Brand New 'Drag Race' Spin-Off In The Works
By Sam Ramsden
George From 'Married At First Sight' Remains On Screen After His Arrest
By Darshita Goyal
What Exactly Is The Bish & Chips Show?
By Frances Stewart
Get The Very Best Of Bustle/UK