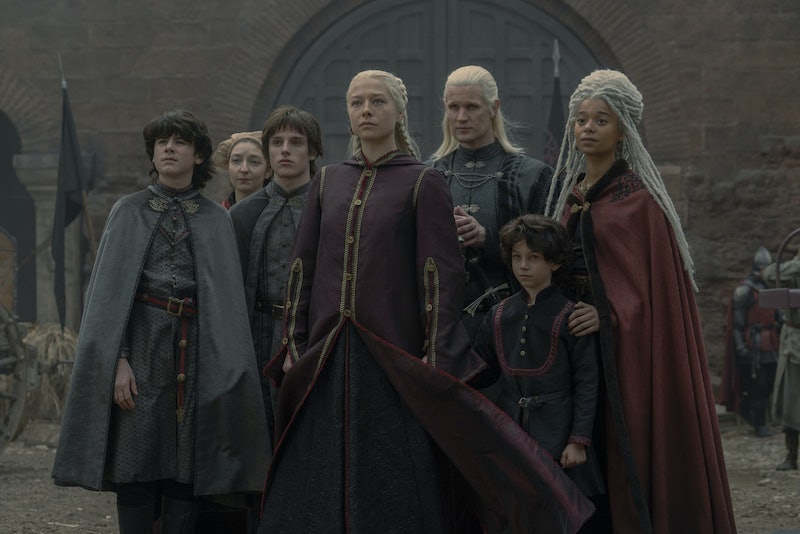 Based on George R.R. Martin’s Fire & Blood novel, HBO’s House of the Dragon rewinds 200 years from the events of Game of Thrones to reveal House Targaryen’s backstory. After the front half of the 10-episode inaugural season aired, the series started introducing several time jumps that required recasting several characters, perhaps most notably Rhaenyra Targaryen and Alicent Hightower. The episodes’ pacing thus far has ultimately given Martin all the evidence he needs to predict how many seasons House of the Dragon will — or, at least, should — run.

The time jumps weren’t all included in his 2018 book though, causing the show to gloss over certain in-between events. “If House of the Dragon had 13 episodes per season, maybe we could have shown all the things we had to ‘time jump’ over… though that would have risked having some viewers complain that the show was too ‘slow,’ that ‘nothing happened,’” Martin wrote in an Oct. 11 blog post.

“As it is, I am thrilled that we still have 10 hours every season to tell our tale,” added Martin, who serves as an executive producer on the series. “I hope that will continue to be true. It is going to take four full seasons of 10 episodes each to do justice to the Dance of the Dragons, from start to finish.”

Months earlier, showrunners Miguel Sapochnik and Ryan Condal confirmed to The Hollywood Reporter in July that they already know how House of the Dragon will end and have a plan for the number of seasons it will take to get there. When the outlet asked if HBO was on board with their plan, Condal replied, “They are — today,” adding, “Endings are the easiest thing to do in television.”

Meanwhile, THR cited sources in reporting that the show’s civil war arc might be shorter than viewers expect, currently planned to run for only about three or four seasons. That being said, the show could still lean into the time jump strategy to cover other eras of the Targaryen dynasty. “The Targaryens span both directions,” Sapochnik added. “So as a spine to other possible stories and spinoffs … this is a great place to start.”

After all, there’s certainly plenty of fan interest, to say the least. House of the Dragon’s Aug. 21 series premiere attracted the largest audience for any new original series in HBO history. So the network wasted no time in renewing House of the Dragon for a second season.

“We are beyond proud of what the entire House of the Dragon team has accomplished with season one. Our phenomenal cast and crew undertook a massive challenge and exceeded all expectations, delivering a show that has already established itself as must-see-TV,” HBO executive vice president Francesca Orsi said in an August statement. “We couldn’t be more excited to continue bringing to life the epic saga of House Targaryen with Season 2.”

More like this
'GoT' Star Emilia Clarke Says She "Just Can't" Watch 'House Of The Dragon'
By Brad Witter
Netflix Shut Down 'Bridgerton' S3 Rumours About A “Very Dark” Storyline
By Bustle
Bill & Frank’s 'The Last Of Us' Episode Has Twitter Emotionally Wrecked
By Alyssa Lapid
Linda Ronstadt’s “Long Long Time” Plays A Pivotal Role In The Last Of Us
By Brad Witter
Get Even More From Bustle — Sign Up For The Newsletter
From hair trends to relationship advice, our daily newsletter has everything you need to sound like a person who’s on TikTok, even if you aren’t.