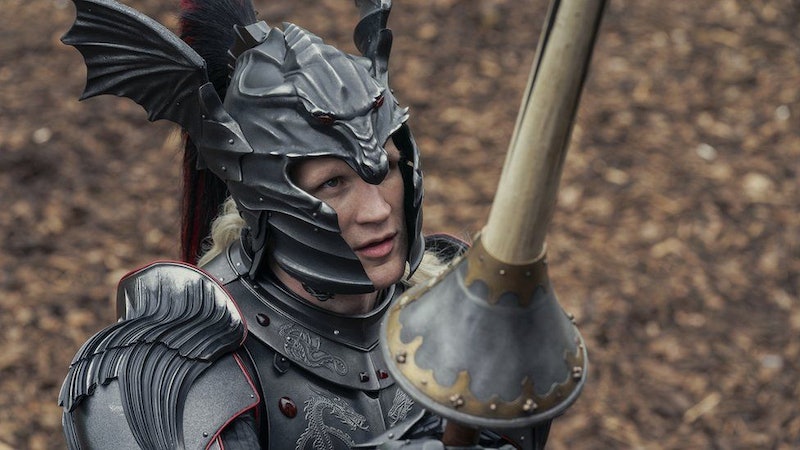 Spoilers ahead for the House of the Dragon season finale. Fans have been theorizing about every moment from the Game of Thrones prequel, House Of The Dragon. Based on George R.R. Martin’s book Fire & Blood, the fantasy series takes viewers back over two centuries, showcasing the civil war between the Targaryen family. It boasts an impressive cast including Matt Smith, who plays Prince Daemon Targaryen, and Emma D’Arcy, who plays Princess Rhaenyra Targaryen. Now that you’ve watched the finale, when will House of the Dragon Season 2 come out?

If you’re already looking ahead, you’re not alone. “We are beyond proud of what the entire House Of The Dragon team has accomplished with Season 1,” the executive vice president of HBO Programming, Francesca Orsi, said of the show’s renewal on Aug. 26. “Our phenomenal cast and crew undertook a massive challenge and exceeded all expectations, delivering a show that has already established itself as must-see-TV... We couldn’t be more excited to continue bringing to life the epic saga of House Targaryen with Season 2.”

Per Variety, House Of The Dragon’s renewal news arrived after the Season 1 debut episode broke HBO’s record for the largest premiere audience of all time, attracting almost 10 million viewers across all platforms.

Here’s everything we know about House of the Dragon Season 2 so far.

House Of The Dragon Season 2 Cast

This is a Game of Thrones spinoff, of course, so character deaths tend to be pretty frequent. Unless we see him in flashback, Paddy Considine won’t be returning as King Viserys in Season 2. The same goes for Elliot Grihault, who played Lucerys, who was killed in the Season 1 finale.

Most of the House of the Dragon cast, however, should return for the upcoming installment. This includes Smith, D’Arcy, Olivia Cooke, Steve Touissant, Eve Best, and Fabien Frankel, who plays Criston Cole. The actor recently told RadioTimes.com about his potential Season 2 knowledge.

“If I'm honest, I went to the pub with Miguel [Sapochnik, the co-showrunner] two months ago. He teased me some things,” the actor explained. “He told me that I should hang out with one person in particular and I'm not going to say who that is, obviously, but he did say: 'I want you and this person to spend some time together and get to know each other.' So, yeah, I'm excited to do that."

You can also expect to see more of the next generation of Targaryens in Season 2, including Tom Glynn-Carney as Aegon and Ewan Mitchell as his brother, Aemond.

House Of The Dragon Season 2 Plot

House of the Dragon Season 2 will continue adapting Fire & Blood now that the Dance of the Dragons has officially begun. However, expect more time jumps — because there’s a lot of material to cover. “I think we have a fairly good plan laid out ... There’s 170 years of history in front of us, so you have to figure out, at what point do you do lower the curtain on this particular story? We’ve always had a good sense of that,” Season 2 showrunner Ryan Condal told Collider.

This post will be updated with the trailer, release date, and additional plot details as more information on House of the Dragon Season 2 becomes available.

More like this
Everything To Know About The 'Daisy Jones & The Six' TV Series
By Maxine Harrison and Brad Witter
'The Last Of Us' Has Officially Been Renewed For Season 2
By Darshita Goyal
These 5 Words In 'The Last Of Us' Ep 2 Have A *Major* Impact In The Future
By Sophie McEvoy
This Dark 'Happy Valley' Theory Is Staring You Right In The Face
By Sophie McEvoy
Get The Very Best Of Bustle/UK
Sign up for Bustle UK's twice-weekly newsletter, featuring the latest must-watch TV, moving personal stories, and expert advice on the hottest viral buys.

This article was originally published on Aug. 21, 2022