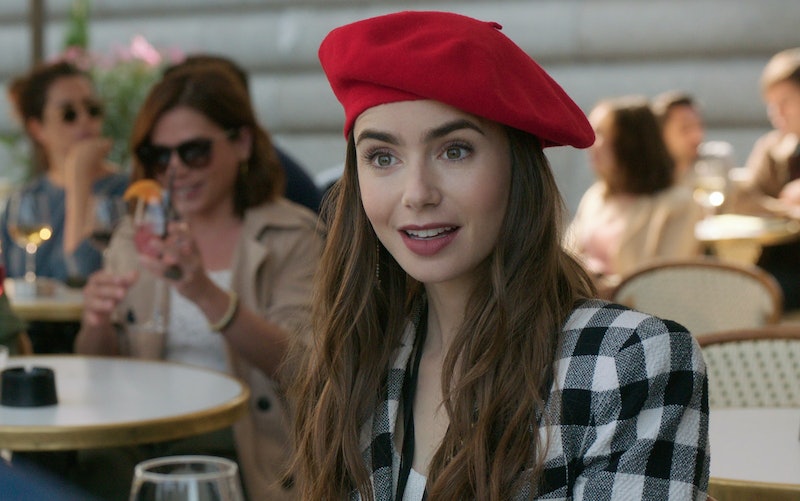 We have a lot of questions about Emily in Paris. Why did a company send someone to France who doesn't know a single word of French? Is it set in an alternate universe? And how old is Emily actually supposed to be? During a recent interview with British Vogue, star Lily Collins mustered an answer to the latter question, saying she believes Emily is in her early 20s and likely working her first professional job when she gets the opportunity to move to Paris. "I don’t believe we’ve ever given her a specific 'number' for her age, but I believe that she’s pretty fresh out of college," Collins said.

"Maybe this is her first year after graduation. I want to say she’s like, 22-ish. She’s had enough experience at her company in Chicago to have earned the respect of her boss," who gets pregnant in the pilot and decides not to transfer to their marketing company's Paris office. "She’s a smart cookie and really innovative," Collins continued. "And this is not her first rodeo doing what she does. She’s gone to school for this, and she’s completed internships."

Collins' theory does make some sense — after all, Emily makes several seemingly obvious professional missteps, despite being promoted to her boss' role in Paris — especially when coupled with the actor's theory that Emily didn't travel abroad during school. "She was really, really focused on her jobs in the Midwest, and I don’t think she’s been abroad," she theorized, explaining that she sees Emily as a "fish out of water" in Paris due to her naïveté about European culture. "If she had gone to a different company in Chicago, she would have been taken seriously – but in Paris, she’s not prepared for the cultural shift that she experiences at Savoir."

However, as writer Ira Madison III pointed out on Twitter, Emily in Paris contradicts Collins' theory in an episode where Emily claims she has a Masters Degree in Communications. "Emily has a MASTER’S DEGREE she is not 22!!!! Lily Collins plz."

Most people complete their undergraduate education before pursuing a Masters, which usually takes about two years to complete. Unless Emily graduated high school a few years early, she would be at least 24 at the start of the show — and that's without taking into consideration the fact that Emily would have had to work at the Gilbert Group for quite some time in order for Emily's boss to feel comfortable sending her to Paris. It's much more likely that Emily is closer to 26 or 27, which is closer to Collins' own age of 31.

However, as Collins pointed out in her interview with British Vogue, Emily's youth plays just as much of a role in the way her coworkers at Savoir treat her as her inability to speak French. "There are a lot of points in the series where she’s trying to defend herself almost proactively," she explained. "The team at Savoir thought that she would be older and speak French – but she only found out that she would be moving to Paris a week before she left Chicago."

Collins also defended her character, explaining that even though Emily had no knowledge of how to speak French before she moved to Paris, she attempted to make the best of it. "That’s just her typical make-it-work attitude, which she has with both her job and relationships," the actor explained. "When she says something like, ‘I did Rosetta Stone’, she’s really saying, ‘Look, I know I’m not prepared, but I’m trying here!’" To be honest, about the same could be said of the show itself.

More like this
Does 'Locke & Key’s Ending Mean There Could Be A Season 4?
By Sophia Moore
Netflix Just Rebooted A Classic ‘90s High School Drama
By Maxine Harrison
Everything To Know About Netflix’s 'Never Have I Ever' Season 4
By Jack Irvin and Gabrielle Bondi
The 'First Kill' Cast & Fans Are Disappointed Over The Show’s Cancellation
By Brad Witter and Sophia Moore
Get Even More From Bustle — Sign Up For The Newsletter