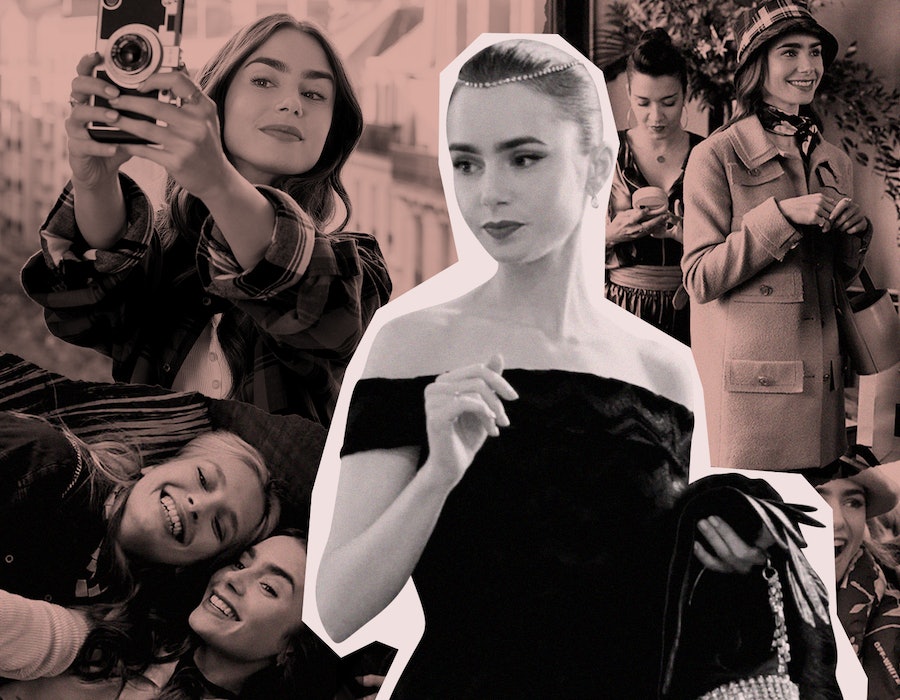 In the first episode of Emily in Paris, the titular Emily (post-relocation to the titular Paris) receives a video call from her boyfriend, who still lives in Chicago. Boyfriend, who is so generically bland that I refuse to retain his name, has the exact level of attractiveness and charisma typically seen in a guy who makes it to the second week on The Bachelorette.

He’s called Emily at 7 p.m. in the Midwest, which is the middle of the night in Paris, because even though his girlfriend has been across the world for a few days, this empty Cubs jersey of a man has forgotten that time differences exist. No matter — in but a few moments, Boyfriend has whipped off his shirt. Emily, played by Lily Collins, arches her signature eyebrows. “Are we having cybersex?” she purrs, proceeding to remove her top before tucking the comforter beneath her armpits to prevent her long-term boyfriend from seeing more than 2 inches of bare flesh.

This scene is the first of many that makes Emily in Paris feel like it was written by a team of 50-something virgins as promotional material to teach North Korean defectors about American customs. Does anyone apart from a late-night reporter on a mission to terrify parents actually call it “cybersex”?

Social media is Emily’s job even though Emily is actively embarrassing at social media.

In fact, I refuse to believe a single 35-year-old glanced at this script before it went into production. The whole show has the cheerful but nonthreatening energy of a CosmoGirl magazine from 2005, the television equivalent of an article teaching you “How to ROCK bold prints on the first day of school.” Nothing is specific. No one has a personality trait with any grit or purpose. Every character floats by, each actor trying their hardest to make lines like “I’d bon-appet-EAT him” slightly less ridiculous than they are.

Our protagonist is sent to Paris in her pregnant boss’s place — apparently the French can’t deal with pregnancy — despite not speaking the language and being incredibly grating as a person. Social media is Emily’s job even though Emily is actively embarrassing at social media. She arrives in Paris with 48 followers (to repeat, this was already her job) but grows to 20,000-plus because people are just so deeply enchanted by selfies with single hashtag captions and basic Boomerangs.

Lily Collins is a beautiful girl and I have no doubt that someone who looks exactly like her could become a very successful Instagram model. But, contrary to what grouchy boomers like to believe about kids and their Insta-tweets, building a following like that that requires a lot of work. If they wanted her experience to relate to the real world on even a basic level, they would show that she at least takes more than one photo before deciding on a good one. And at a minimum, any vaguely online person would know you can’t use a hashtag with an apostrophe (really, Emily?).

Emily would not go viral because she has taken a picture of herself eating a croissant in Paris.

Also, those hashtag captions cannot cut it. Emily would not go viral because she has taken a picture of herself eating a croissant in Paris. Thousands of girls study abroad every year! This is a post-Caroline Calloway world — building a brand as the “American abroad” requires narrative and writing, letting people peek into the experience just enough so that they feel both a part of it and also bitterly jealous at the same time.

Sex and the City — also created by Darren Star — often gets flak for its Vaseline-sheen fictionalization of New York City, but at least the characters had challenges that felt like heightened versions of things that human beings might experience on planet Earth. Yes, Carrie spent too much money on shoes — but we saw where she got the money. We saw the closet where she kept them. We saw that she went broke because she was buying too many shoes. Her love of shoes was a part of Carrie being a full, strange person who had an existence consistent with cause and effect.

Compare that to Emily, who we are told again and again is a ruthlessly organized and competent businesswoman, but who seems to have also brought multiple berets with her on a move across the globe. Does Emily even like clothes? Why does she dress like that if she never once mentions an interest in fashion or, even more egregious, if she never once chooses to showcase her outfits on her inexplicably successful Instagram?

The whole show has the cheerful but nonthreatening energy of a CosmoGirl magazine from 2005.

The whole show has a resounding “written by adults” quality. When Emily’s involved in a major fashion scandal that winds up in the international news, she wakes up to 27 phone calls but only four (4!) text messages. During one conversation in the office, she refers to increasing “follower notifications,” whatever they are. We’re through the Looking Glass, a parallel universe where the Berenstain Bears are spelled Berenstein, and Marty McFly actually had sex with his mom.

I am not one to shame television for being glossy fluff. I believe in TV shows serving as a brain rinse that allows viewers to zone out and become numb to the outside world. In that way, Emily in Paris is as easy to consume as a pint of butter pecan, and if it’s not obvious, I watched the entire season in a single day. But it also feels like a missed opportunity to have a show about a young girl setting out in the world alone and not tether it to any reality that a 20-something girl today would recognize.

It’s competently structured, glossy, and well-enough filmed, but it’s also like one of those chainmail Facebook posts where scientists show you that you can still read things when the frsit and lsat letrets of a word saty in palce. If you squint and let your eyes go out of focus, you can suspend disbelief just long enough to fill in the gaps.

More like this
Nicola Coughlan Just Shared A Major Update About 'Bridgerton' S3
By Sam Ramsden
The 'Ugly Betty' Cast Just Reunited In The Best Way
By Sam Ramsden
5 Biggest Takeaways From Channel 4's 'Untold: Life After Love Island'
By Sophie McEvoy
The Truth Behind Olly Murs' Controversial "I Hate You When You're Drunk"
By El Hunt
Get Even More From Bustle — Sign Up For The Newsletter