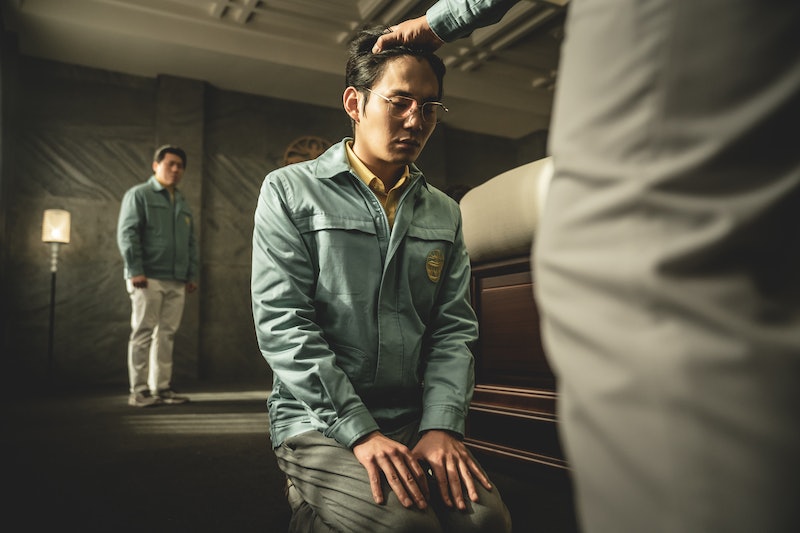 Based on the digital comic of the same name, the South Korean Netflix drama Hellbound has fast become the world’s latest streaming obsession, racked up over 43 million viewers in three days. Following the success of the terrifying Squid Game, fans and critics alike have been drawing comparisons between the two. Hellbound’s take on terror is slightly different though. Set within a world that is suddenly infiltrated with supernatural beings that seek to condemn people to hell, you are right to wonder: just how scary is Hellbound?

Well, Netflix’s latest South Korean smash might not be as relentlessly brutal, gory, and tense as Squid Game. But, in short: yes, Hellbound is pretty scary. The plot of the drama centres around otherworldly, hulk-like monsters who arrive on Earth to condemn people to hell with a blinding light that turns people into charcoaled corpses.

One other scary aspect of Hellbound is the show’s undertone of online misinformation, and how quickly it can be spread on social media in order to manipulate society. We see this throughout the drama with the rise of a religious group known as The New Truth, who capitalise on people’s fear to grow their influence in South Korea.

With the rise of false information online being discussed in relation to both the political sphere and world health new of late in the real world, these themes of the show feel particularly close to home.

Robert Ebert describes Hellbound as a “brutal, thrilling series” that includes “QAnon-like” themes throughout. “The wrath monster trio might be absurd, but the madness within Hellbound is extremely believable,” the review concludes.

Elsewhere, NME describes the South Korean drama as “chilling” and a “complex exploration of good and evil for the information age.” The review adds, “Hellbound’s greatest strength is its ability to flesh out its paranormal premise in a real-world context through a variety of frightening and even hilariously satirical ways.”

Meanwhile, some fans of the Netflix hit have been sharing what they find most scary about Hellbound. “I can't watch Hellbound at night with the lights off ... This drama is amazingly scary,” one viewer wrote on Twitter, while another fan shared their view that the scariest aspect of the show is “how easily manipulated the masses are” rather than the “legitimate physical threat.”