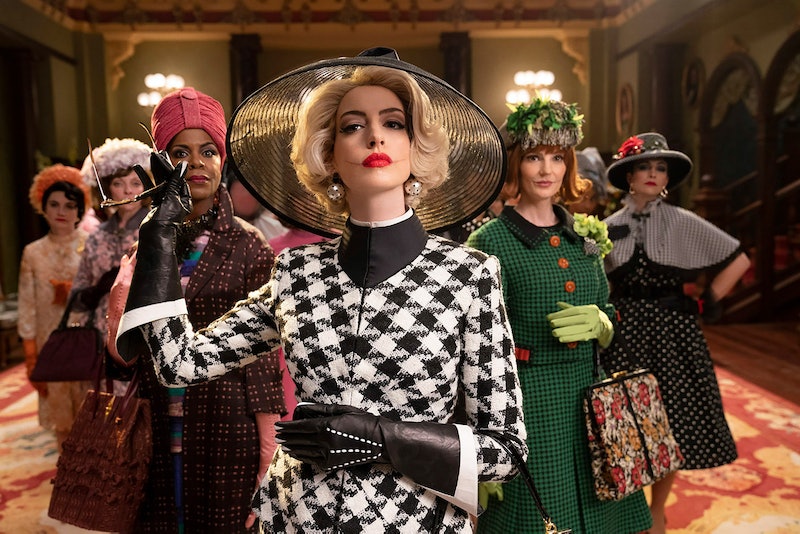 The 1990 adaptation of Roald Dahl's The Witches successfully traumatized an entire generation of kids. Now, an HBO Max reboot starring Anne Hathaway will attempt to do the same to a whole new generation. But how scary is The Witches remake? The original is often counted among the most frightening kids movies ever made, thanks in part to an infamous scene in which the titular villains reveal their terrifying true forms. Anjelica Huston played the Grand High Witch in the 1990 version, a role she's been celebrated for ever since. But will Hathaway's performance be as wickedly wonderful?

Earlier this month, Hathaway shared a number of photos of Huston's The Witches character to her Instagram, praising the actor's performance and specifically calling out how scary it was. "Her performance is magnificent — witty, unforgettable, scary as hell and sheer perfection (the scene where she pushes the baby down the cliff still gives me chills to this day.)," Hathaway wrote. "I just wanted to say, one AH to another, that I tip my wig to the O.G.G.H.W. Anjelica Huston." But from what we've seen of Hathaway's performance in the trailer, it looks like her version of the Grand High Witch won't be quite as disturbing as Huston's original.

Furthermore, the remake is directed by Robert Zemeckis, a highly-accomplished filmmaker who is new to the horror genre. Instead, Zemeckis is known for his trailblazing work with computer effects and his uplifting fantasy films. For example, the director helmed the Back to the Future trilogy, Forrest Gump, Who Framed Roger Rabbit, and The Polar Express. The closest Zemeckis has ever come to directing a horror film was the dark comedy Death Becomes Her which, while macabre, isn't a traditionally scary film. With Zemeckis behind the camera of The Witches remake, it seems likely that the new film will be more special effects-laden and more fanciful, but less scary than its predecessor.

While The Witches remake may have some mildly frightening bits, you shouldn't expect the bright and colorful film filled with funny CGI mice to be nearly as dark — or as traumatizing — as the 1990 original.