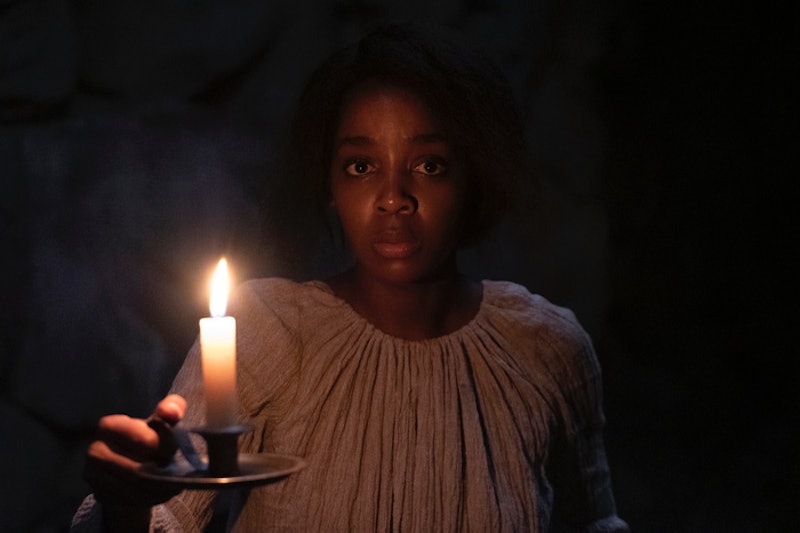 Set in the antebellum American South, The Underground Railroad centers on Cora: an enslaved young woman who has grown up alone on the Randall plantation in Georgia, ever since her mother, Mabel, left her behind to make a break for freedom. Cora makes her own desperate flight when Caesar, another enslaved man on the property, approaches her with a plan to escape. They run away with a third person, Cora’s friend Lovey, but are separated when Lovey is captured by slavecatchers and returned, presumably, to the Randall brothers.

Together, Cora and Caesar make their way to the Underground Railroad: a massive subway system that runs all the way from the Deep South to the north side of the Mason-Dixon line. They head for South Carolina, which has recently abolished slavery as much of the South knows it, instead opting to make all enslaved people the property of the state government, which provides them with food, shelter, and medical care in exchange for their labor. It isn’t a perfect system, by any means, but Cora and Caesar — now living as Bessie and Christian — settle into their new lives and take advantage of the comfortable housing and education opportunities available to them in South Carolina, rather than moving further north.

Back in Georgia, the Randall brothers have hired a slavecatcher named Ridgeway to find Cora and Caesar and bring them back to the plantation. Mabel was the only runaway who Ridgeway was not able to catch and return, and he latches onto Cora — not as another escapee to track down, but as a means of correcting his failure with her mother.

Meanwhile, Cora and Caesar discover that the comforts and opportunities they’ve come to appreciate in South Carolina belie several grim truths. Although the state government pays the people it legally owns, the wages are less than those earned by whites. Coupled with the fact that necessities sold in stores that cater to Black customers are several times more expensive than products sold to their white neighbors, this pay disparity leaves many Black people in South Carolina with little choice but to go into debt to sustain themselves.

After working as a domestic for some time, Cora receives a job transfer to the local museum, where she and several other women are paid to portray a variety of Black “types” — including tribal African women and enslaved plantation workers — for the entertainment of white South Carolinians.

It’s another strange series of events that convinces Cora to leave South Carolina, however. After she sees a desperate woman from another dormitory interrupt a state-run party for Black workers, screaming that her children are being taken from her, Cora begins to worry about the others who live in that building, which supposedly houses mentally ill Black women. A doctor explains that South Carolina requires those women, and others like them, to be sterilized, and he encourages Cora to consider choosing sterilization for herself. As she soon learns, not only are many Black women being forcibly sterilized, but other Black South Carolinians have also been subjected to experimental medical procedures — all designed to “protect” whites from their newly freed Black neighbors.

Ridgeway closes in on Cora and Caesar before they leave South Carolina. When he sets the local Underground Railroad station manager’s house alight, only Cora manages to escape. She hitches a ride on the next train that comes through and winds up in North Carolina, where things have recently gotten worse for Black people.

The North Carolina station manager, Martin, explains that his state followed South Carolina’s method of “abolishing” slavery, and had the state government buy enslaved people from plantation owners. Instead of making segregated spaces for Black North Carolinians, however, the state instead sold the people it owned to other slaveholding states and used night rider patrols to intimidate, assault, and arrest Black people who dared to pass through North Carolina. Public lynchings are common, as Cora later sees for herself, and the people who condone them use the same logic that South Carolinians used to justify medical experimentation: that white people must be protected from Black people.

Martin gives Cora a place to stay in his attic, much to the chagrin of his wife, Ethel. Although she expects to leave on the next train, she soon comes to realize that Martin has no intention of helping her leave North Carolina; he’s too afraid of what might happen to his family if their night-rider neighbors learn that he’s harboring a Black fugitive.

The station manager’s fears soon come to pass. Martin and Ethel’s servant, Fiona, tips off the night riders, despite the family’s efforts to hide Cora from Fiona. Turned over to Ridgeway, Cora is led away from town just as Martin and Ethel are lashed to a tree to be stoned to death for helping her.

On the road through Tennessee with Ridgeway, who is headed to Missouri to recapture another runaway, Cora learns that both Lovey and Caesar have met grisly ends: Lovey at the hands of one of Ridgeway’s associates, and Caesar to a violent mob in South Carolina. Cora doesn’t have long to ruminate on this, however, because a freeman named Royal comes to her aid, helping her to leave Ridgeway in chains and escape to a safe haven in Indiana.

Owned by a white-passing man named John Valentine, the Valentine farm is home to dozens of freeborn Black people and runaways like Cora. She attends school with the local children and nurtures a budding romance with Royal, but her position at Valentine is tenuous.

Although the local whites have come to live somewhat in harmony with their Black neighbors on the farm, some Valentine residents believe that runaways should not be allowed to remain on the property, in order to protect its freeborn citizens from retribution and manage resources more effectively. In addition, the entire Valentine community is gearing up for a vote that will determine whether they stay in Indiana, move across the border into Canada, or travel further west.

Tragedy strikes ahead of the vote, at a formal debate to decide Valentine’s fate. A number of hidden white people — including Ridgeway — attack the farm’s residents, killing Royal and several others. Ridgeway takes Cora prisoner again.

At this point, the novel cuts away to reveal Mabel’s fate. Although most of the people Cora has asked about her mother, and even Ridgeway himself, have insisted that Mabel must be living in Canada, a brief chapter at the close of the novel reveals that she never made it to freedom. Instead, Mabel was bitten by a venomous snake and died on the first leg of her journey, and her body was overtaken by a nearby swamp.

After this interlude, Ridgeway forces Cora to lead him to the local Underground Railroad station, which Royal had shown her after they arrived at Valentine. She fights back at the entrance and leaves Ridgeway to die, propelling herself down the long, dark tunnel on a handcar.

Because this section of the Railroad is unfinished, Cora eventually reaches the end of the line and must carve the rest of the tunnel out herself. When she finally emerges on the other side, in some unknown location, Cora meets Ollie, a Black man headed for California, and hitches a ride on his wagon.

The Underground Railroad is streaming now on Prime Video.

More like this
Everything To Know About The 'Daisy Jones & The Six' TV Series
By Maxine Harrison and Brad Witter
A 'Terminal List' Sequel & Spinoff Are Reportedly In The Works
By Kadin Burnett and Grace Wehniainen
Netflix Shut Down 'Bridgerton' S3 Rumours About A “Very Dark” Storyline
By Bustle
Jessica Simpson On The Time She Was Pursued By A Backstreet Boy & An *NSYNC Member
By The Editors
Get Even More From Bustle — Sign Up For The Newsletter
From hair trends to relationship advice, our daily newsletter has everything you need to sound like a person who’s on TikTok, even if you aren’t.