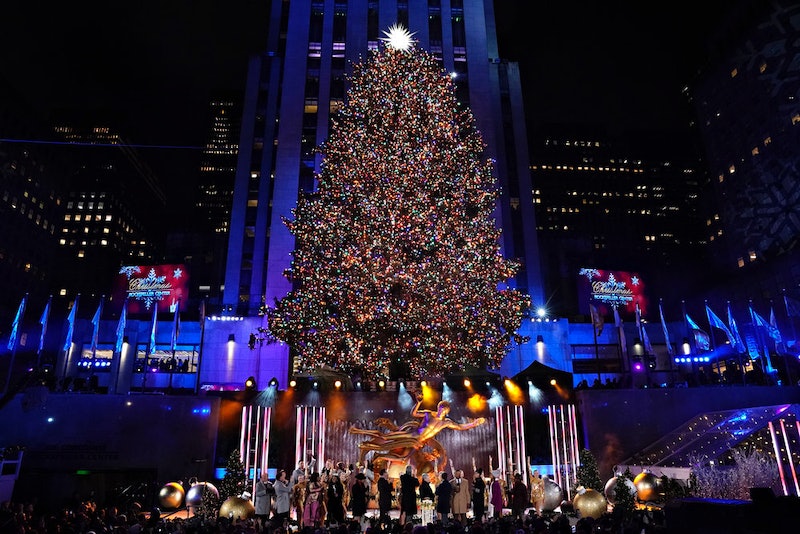 A pandemic isn't going to stop the Christmas tree lighting in Rockefeller Plaza. An annual tradition since 1931, the tree lighting will continue this year. As NBC Executive Vice President of Special Programs Doug Vaughan said in a press statement, "Every year our viewers look forward to NBC’s iconic tree-lighting ceremony. There’s something special about kicking off the holiday season with such an awe-inspiring event.” But unlike Christmases before, the event will not be open to the public this time. Instead, organizers are encouraging everyone to watch the Christmas in Rockefeller Center special from home. Since viewing the tree lighting in person isn't an option, the network detailed everything you need to know about streaming the festive event.

The Christmas in Rockefeller Center special will air live on NBC on Dec. 2 from 8 p.m. to 10 p.m. ET. If you live on the West Coast, the event will be recorded and air at 8 p.m. PT. (Per the Rockefeller website, if you want to tune in just for the lighting, that will happen at 9:45 p.m during both broadcasts.) The show will be hosted by TODAY show anchors Savannah Guthrie, Hoda Kotb, Craig Melvin and Al Roker. For some extra cheer, there will also be a special pre-show of live performances starting at 7 p.m., hosted by Mario Lopez, Natalie Pasquarella, and David Ushery.

If you have a cable subscription, you can also live stream the show via NBC's website or on the NBC app. If you don't have cable, consider using a streaming service, such as Sling TV, YouTube TV, or Hulu with the live TV add-on. Regardless of how you watch, it's important you tune in at the the right time because the special will not be posted online afterwards.

Dolly Parton, Kelly Clarkson, Gwen Stefani, Leslie Odom Jr., and Pentatonix will perform throughout the evening. The cast of the Broadway musicals Ain't Too Proud and Mean Girls will also be there, along with the Radio City Rockettes. To top it all off, there will be cameos from Saturday Night Live cast members Aidy Bryant, Michael Che, Colin Jost, and Kenan Thompson.

How To Visit The Rockefeller Christmas Tree

Though the big lighting event will be closed to the public, you can still visit the tree during the holiday season. To keep the attraction as safe as possible, you'll be required to purchase a ticket before you go this year. "This is not a spectator event as it was in the past," Mayor Bill de Blasio said at a press conference, per CBS News. "What we do not want and can't have is large crowds of people crowding in there."

According to the Rockefeller website, social distancing and masks will be required at all times, and you can only bring up to four people per group. They'll also utilize a virtual queuing system that will text you about your viewing time. There will only be entrances to see the tree at 49th and 50th streets and on 5th and 6th Avenues. Once you have entered, you'll follow socially distanced markers until you get to where the tree is located. Each party will have to keep their visit brief, as Rockefeller will only allow five minutes for groups to take pictures and see how skilled workers transformed the tree from its previous "balding" and "haggard" condition.

It may be an unusual approach, but de Blasio emphasized safety was of upmost importance. "It's just not like holidays we've gone through before," the mayor continued. "Let's get through 2020, let's turn the page. In 2021, we can all get back there to celebrate the tree the right way. But this year is 'less is more.'"