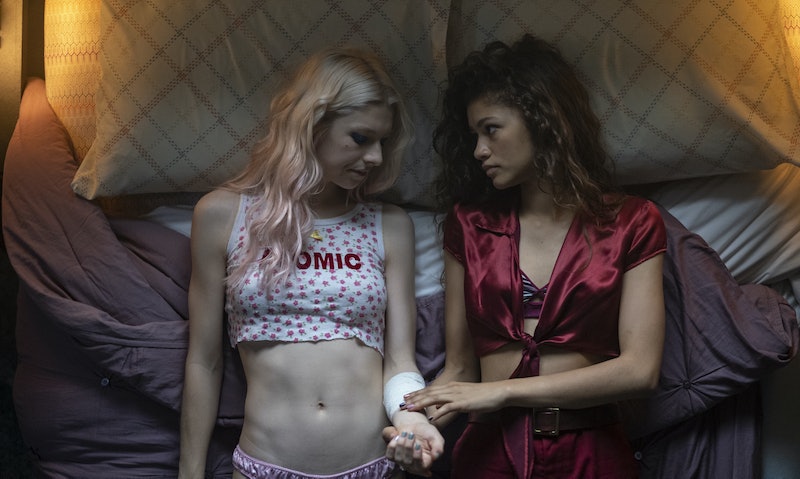 Euphoria cleaned up at last night's Emmy Awards, with Zendaya becoming the youngest person to win the Lead Actress in a Drama Series category. But if you still haven't seen the smash hit HBO series, you may be wondering how to watch Euphoria in the UK. Lucky for you, it couldn't be easier.

Season one of Euphoria aired on Sky Atlantic on Tuesday nights at 10 p.m. during August last year and is now available to watch in full on NOW TV and on Amazon Prime also. Sadly there's still no news on when season two will air (here or in the U.S.), but with all its wins last night (Sept. 20), we should hear news very soon.

Euphoria revolves around a group of teens in suburban America who are trying to contend with school, love, drugs, addiction, social media, and more. Season one had Drake as an executive producer, which is a pretty smart move considering as he knows a thing or two about dramas. The Hotling Bling singer starred on Canadian teen soap Degrassi: The Next Generation where he played basketball star Jimmy Brooks and, more recently, he was the executive producer on season three of the British drama Top Boy.

Ahead of Euphoria's premiere last year, director and creator Sam Levinson told the Hollywood Reporter "There are going to be parents who are going to be totally fucking freaked out." And he wasn't wrong. Parents Television Council President Tim Winter stated that the show "appears to be overtly, intentionally marketing extremely graphic adult content — sex, violence, profanity and drug use — to teens and preteens." The show is pretty graphic and Refinery29 have reported that you see 30 penises in just one episode. Blimey.

While some viewers may believe that Euphoria is only about shock value (think the U.S. answer to Skins), there’s actually a lot more to it than that, according to the outpouring of positive reviews published last year.

“Euphoria will certainly not appeal to all tastes,” journalist Rebecca Nicholson said in a 4/5 star Guardian review. “But it is far less brash than it has been made out to be. There are deep sophistications hidden within its more straightforwardly angsty digressions.”

This article was originally published on June 14, 2019