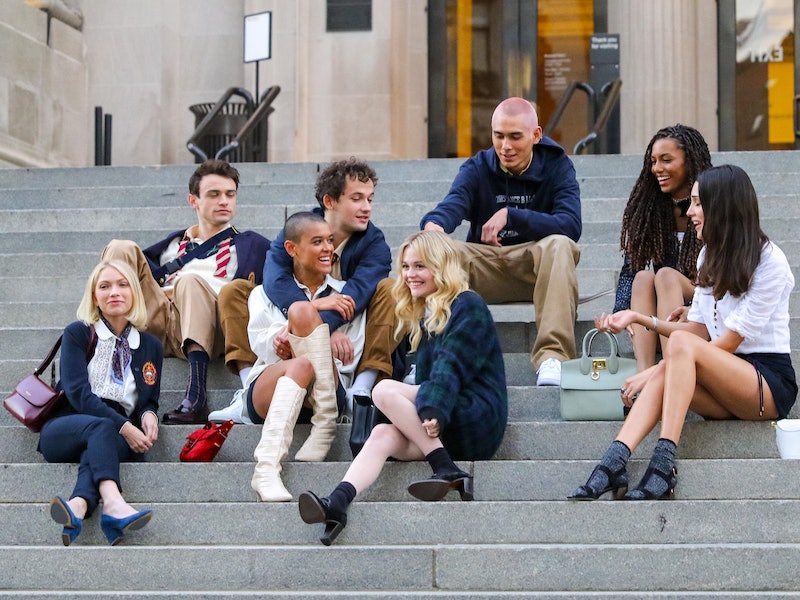 Grab your headbands, because the reboot of the ever-popular teen series Gossip Girl is just around the corner. Close to ten years after the original series ended, HBO Max has enlisted a new cast of young, diverse, and “very, very queer” actors to play its stylish New York teens, and GG fans globally are considerably amped for the show’s return. It’s no surprise that viewers on these shores are wondering how to watch the Gossip Girl reboot in the UK. Keep reading to find out what we know so far.

Following the release of Gossip Girl’s explosive first look trailer (featuring lots of the scandal and drama), it was confirmed on May 28 that Gossip Girl will debut on July 8 on HBO Max with ten episodes. And now we finally have a UK broadcaster, too.

In a statement sent to Bustle, a BBC rep confirmed the Gossip Girl reboot would be coming to BBC One and BBC iPlayer on August 25th, all six episodes arriving as a box set on iPlayer, and the first episode being broadcast on BBC One at 10.35 p.m. Plus, the BBC will be adding all the episodes from the original 2007-2012 series to iPlayer on August 18th. In other words, prepare yourself for a major GG marathon session.

Production on the Gossip Girl series began on Nov. 2, 2020, with the new cast taking their position on the steps of the Metropolitan Museum of Art in New York City — an iconic location for the series. So what to expect when Gossip Girl does eventually air in the UK?

Well, much like the original, the antics of privileged New York teens will be stalked and detailed by a Gossip Girl online profile, however, in 2021, it is an Instagram page not a blog. Plus, there’s no Serena or Blair (although, finger’s crossed for many OG Gossip Girl cameos).

While the show is still being narrated by the dulcet tones of Kirsten Bell, Gossip Girl is surprisingly not anonymous in the new series (so no need to relive the shock Dan Humphries bombshell of the noughties).

Per the synopsis, the rebooted series takes place “nine years after the original website went dark” and “a new generation of New York private school teens are introduced to the social surveillance of Gossip Girl.” It adds: “The prestige series will address just how much social media — and the landscape of New York itself — has changed in the intervening years.”

Starring Emily Alyn Lind (Revenge), Whitney Peak (Chilling Adventures of Sabrina), Eli Brown (Pretty Little Liars: The Perfectionists), and Johnathan Fernandez (Lethal Weapon), the revamped programme is expected be more relevant for 2021 audiences, as one of the show’s original creators, Joshua Safran, confirms there would be “no slut-shaming” and “no catfights” in the reboot.

However, from the looks of the trailer, the new season will see still the glamorous penthouses, high end fashion shows, steamy make outs, and of course, hangouts on the Met steps, that made the show famous.