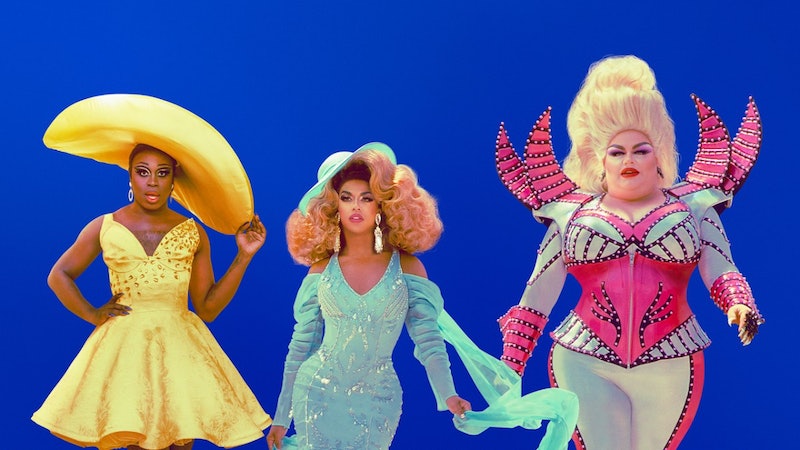 Fans of RuPaul's Drag Race UK were left in limbo when coronavirus put the second series on hold indefinitely. And while there is plenty of RuPaul content to rewatch on Netflix, HBO is now introducing an entirely new series to fill the Drag Race void. Featuring three of the show's most recognisable queens, We're Here follows Shangela Laquifa Wadley, Bob The Drag Queen, and Eureka O'Hara as they tour small town America. So how to watch We're Here in the UK?

HBO may not be available here as its own channel, but Sky Atlantic struck a deal with the cable giant in 2010, which allows UK viewers to enjoy shows like Game of Thrones, Westworld, and even the Phoebe Waller-Bridge produced series Run. Last October, this deal was renewed for a further five years, per Variety. As Screen Rant explains, this will also include content on HBO's upcoming streaming service, which will be released on Sky Atlantic and Now TV.

A rep for Now TV tells Bustle that We’re Here will be available on Sky One and Now TV from August 14, via the Entertainment Pass. The series originally aired in the U.S. from April 23 until May 28.

For a tease of what we've got to look forward to, HBO have highlights on their YouTube channel. There's plenty of content from episode one, which sees the queens arrive in Gettysburg to serve seriously glam looks to the locals. We're Here "follows small-town residents as they're recruited and trained to participate in a one-night only drag performance," as HBO writes. Bob, Eureka, and Shangela "will help prepare their 'drag daughters' by teaching them how to step outside their comfort zones."

Basically, it's as close to a Queer Eye x RuPaul hybrid as the world is going to get.