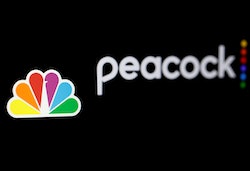 There's another streaming site hitting the market on July 15. Peacock is Comcast NBCUniversal's own streaming platform, which will feature popular NBC shows like The Office and Parks and Recreation, along with films like Shrek and its flagship show Brave New World, an adaptation of Aldous Huxley's 1932 dystopian novel. If you use Amazon's Fire Stick and are curious about checking out this new service (or can't live without your daily dose of Dunder Mifflin) here's how to watch Peacock on an Amazon Fire Stick — though be warned, it's a little more complicated than just downloading an app.

The issue lies with the distribution deals. Comcast currently doesn't have a deal with Amazon, which means there's no Peacock app on Fire TV that will allow you to effortlessly watch shows as a Peacock subscriber. Per CNET, though Amazon's Fire TV is the second-most popular streaming media player behind Roku, Amazon has been "assertive in their talks" over terms with new streaming services, which has led to impasses. (This is why WarnerMedia's HBO Max also rolled out in May without a Fire TV app.)

It's possible Comcast and Amazon will eventually come to an agreement, but until then, The Streamable has found a workaround that will mirror your mobile screen on the TV. You're going to need a smartphone and a third-party app on your Fire TV Stick like AllCast or TV Cast. Both casting apps are free, and can be downloaded directly on the Amazon website and sent to your Fire TV.

Here's the step by step:

2. Once you're subscribed, install the Peacock iOS App or Peacock Android App on your phone (once they're available on July 15).

3. Log in to the app using your Peacock credentials.

4. Open up Fire TV, and make sure your Fire TV and your mobile device are on the same Wi-Fi network.

5. Download one of the third party streaming apps like AllCast or TV Cast and open it on your Fire TV.

6. Start playing a movie or show on the Peacock app, and then click the Cast icon (the little TV-like square) in the corner.

7. Select your Fire TV from the list, and your Peacock show should automatically start playing on the TV.

Voila! It's not the easiest method, but hopefully this workaround will tide viewers over until Comcast and Amazon hash things out.

More like this
Everything To Know About 'The Real Housewives Ultimate Girls Trip' Season 4
By Jake Viswanath
Andy Cohen Apologized To Larsa Pippen After A 'RHOM' Season 5 Reunion Dust-Up
By Brad Witter
You Can Still Stream The 2023 Grammys Even If You Don't Have TV Or Cable
By Grace Wehniainen
Love Island’s Latest Winter Season Finally Has A US Release Date
By Grace Wehniainen
Get Even More From Bustle — Sign Up For The Newsletter
From hair trends to relationship advice, our daily newsletter has everything you need to sound like a person who’s on TikTok, even if you aren’t.