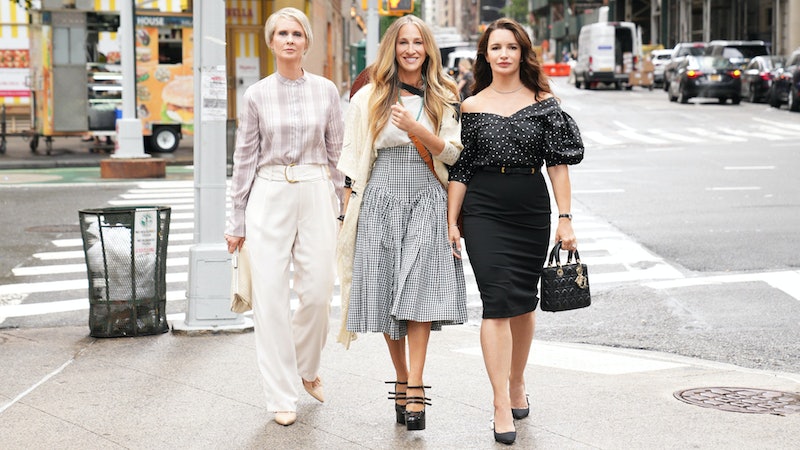 On the morning of January 11, 2021, Sex & the City fans awoke to some very exciting news: the much-loved show was officially getting a reboot. News about when and where U.S. viewers could watch And Just Like That... broke last month – but what about fans here in the UK?

Well, I have good news. On Nov. 3, Sky announced that And Just Like That... would be arriving on their network on Dec. 9. with the first two episodes premiering then, and the following eight episodes airing on a weekly basis on Thursdays. (All ten-episode series will be available from 9 December on Sky Comedy and streaming service NOW, though.)

HBO and the series’ lead Sarah-Jessica Parker (who plays Carrie Bradshaw) have been posting teaser of And Just Like That... on Instagram throughout 2021, including a recent video compilation of behind-the-scenes action.

Parker will be joined in the series by Kristin Davis and Cynthia Nixon, who will be reprising their roles of Charlotte Yorke and Miranda Hobbes, respectively. Other returning characters include Mr Big (played by Chris Noth), Steve Brady (David Eigenberg), Harry Goldenblatt (Evan Handler), and Anthony Marentino (Mario Cantone).

Carrie’s best friend and confidant Stanford Blatch will also be returning, as Willie Garson finished filming the series one month before his tragic passing. It is not yet known if and how And Just Like That... will mark this loss.

The character of Samantha Jones, played by Kim Cattrall, will be noticeably absent from the reboot. Cattrall has been pretty vocal about not wanting to return to the role since the end of the second spin-off move. In the past few years, she has publicly distanced herself from the show and from her co-star Parker, who she says "could have been nicer" during filming and in the aftermath.

Last December, Cattrall told the Women's Prize for Fiction podcast, "Walking away, even if it's the only thing to do, you always feel a bit of shame, I think." She continued, "You have to let go of that [shame]. You don't want to become that caged bird."

Cattrall said on the podcast that she wanted "to tell stories about women [her] age who have gone through loss." Over the past decade, the actor's has dealt with the death of both her father and her brother. "Loss is the biggest headache of my 60s so far," she said.

The new series will of consists of ten 30-minute episodes and will pick up with Carrie, Charlotte, and Miranda as they navigate life and friendship in their 50s.