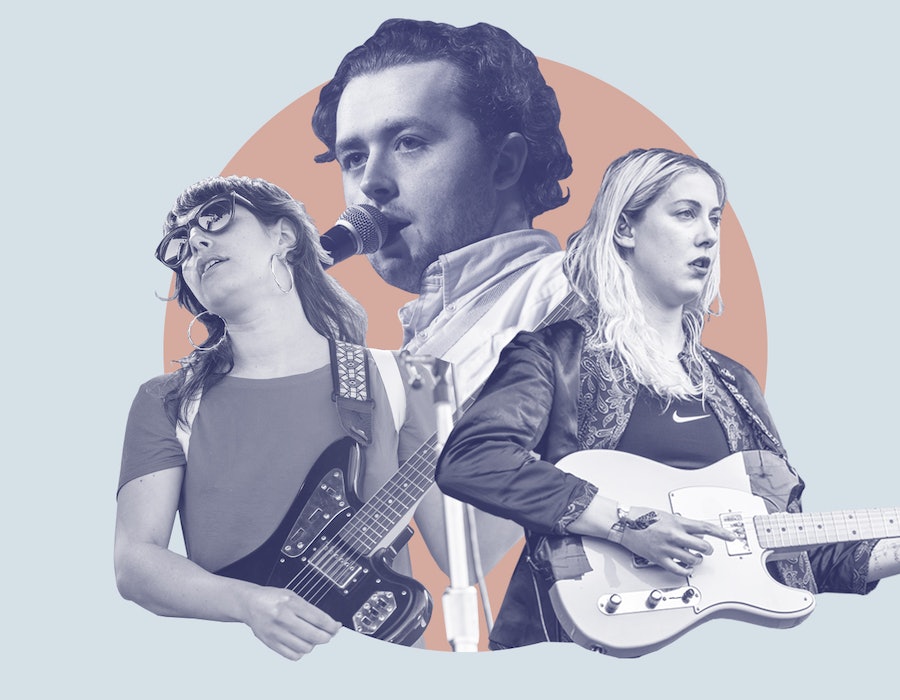 Marisa Dabice should be playing a show to hundreds of fans in Nashville right now. Instead, she’s practicing social distancing with her partner while sequestered in their Philadelphia home on a “doomsdate.” As the coronavirus pandemic spreads across the U.S. and the world at large, the vocalist and guitarist of the punk rock band Mannequin Pussy was forced to cancel the last two months of the band’s three-month tour, including a much-anticipated performance at the now-postponed Coachella; she estimates they’re collectively out around $80,000 in income. Still, she considers herself lucky that her partner can cover the mortgage for the house while she’s out of work.

“I’m in a much better position than, I think, a lot of my friends and peers right now, whose landlords are going to expect rent to be paid in a few weeks,” Dabice tells Bustle. “What do you do when you’ve lost your only form of income?”

As some cities impose capacity bans and others close down nonessential businesses like nightclubs altogether to prevent the virus’ spread, musicians are not only losing out on money for gigs, but also on opportunities for exposure. In the increasingly crowded musical landscape, timing is essential to a musician’s success — it’s easy to lose momentum and get lost in the shuffle if you’re not constantly touring and promoting your work.

“What do you do when you’ve lost your only form of income?”

The impact the COVID-19 pandemic would have on touring musicians in the U.S. was first acutely felt in early March, when South by Southwest — a cornerstone among music industry professionals and musicians that’s dedicated to the discovery of lesser-known acts — canceled its yearly festival in Austin, Texas. While few artists are actually paid for their SXSW gigs, the festival attracts rising talent by promising exposure. Members of the Scottish band Vistas knew they would lose money by traveling to Texas to play SXSW; they wouldn’t even be allowed to play paid gigs due to restrictions on their visas. But they considered SXSW an opportunity that would have paid in publicity.

“It costs any band a lot of money to play live, even in their home country, but traveling all the way to America, there's so many costs, from visas to flights to booking extra luggage on flights so you can fly with instruments, to accommodation,” Vistas vocalist Prentice Robertson says. Though the band estimates they lost around £6,000 (nearly $7,000) on their planned trip, the frustration is about more than money. “It also takes so much time and effort… for it to be canceled, for that work to be for nothing, it’s really hard to take.”

Zone 6 Management co-founder Brandon Stosuy, who represents musicians who were slated to play SXSW, agrees that many of the festival’s performers are just as upset about missed opportunities as they are about losing money. “Many people don’t look at [SXSW] as a money thing; they just want their music to be heard,” he says. “If you’re playing a typical show in a major city, chances are there aren’t as many industry people there as there will be at SXSW. [Bands] don’t care that they’re not making a huge amount of money on it — it’s just about being there and being part of that conversation.”

"I know if I can get in front of people, I can make new fans.”

It’s that age-old musician’s dream: Play a show, get discovered. “For indie rock, that’s our version of going viral,” says Mia Berrin, guitarist and vocalist for the Brooklyn-based band Pom Pom Squad. “You go into a room, you play your show, and you leave with X number of fans — you leave with 10 more people who want to listen to you or read about you and hear what you have to say.” That was Berrin’s plan for Pom Pom Squad’s next two months before the cancellations: after kicking off their first-ever tour at SXSW, the band was to head on a second tour opening for Disq, and then tour with The Front Bottoms, hopefully sharing their music with a diverse, new body of fans in a short time period.

Berrin had anxiously awaited SXSW, where there were meetings scheduled, fans to meet, and artistic heroes to play alongside. Most of all, she anticipated getting on stage. “As a person who’s worked really, really hard to have a voice — and my live show is my great love, it's what feeds me, it's the greatest marketing tool I have as a band — I know if I can get in front of people, I can make new fans,” Berrin says.

Not being able to tour is also a concern for Canada-based singer-songwriter Linnea Siggelkow, who performs as Ellis. The release plan for her debut album, out April 3, relies heavily on promotion via touring: she’d been booked to open 10 shows for Ratboys that have since been canceled, and has some solo shows slated for April that will likely get canceled too. Now, she’s worried her music will get lost in the shuffle.

“[For] an artist at my level, a major way to promote a record is through touring,” Sigglekow says. “It feels like such a tricky time to be dropping this record. I feel devastated because I worked so hard to get to this moment, and then the moment is gone.”

There are material concerns, too. Siggelkow lost money on canceled events; other bands like Pom Pom Squad tour mates Disq have members who quit their jobs to accommodate a tour that’s no longer happening.

Other acts, like Mackenzie Scott’s Torres, were on tour abroad when President Trump suspended travel from Europe to the U.S. When Scott tried to book plane tickets back to the U.S. from Berlin in the post-announcement panic, she says airfares had jumped to between $10,000 and $20,000 per ticket — roughly 25-50 times the average price — within minutes. Scott ended up crowdfunding on Patreon to get her band home; though she managed to snag slightly cheaper fares, she spent hours in the car getting to the only viable airport in Amsterdam, then traveling the long way home, from Amsterdam to Moscow to New York. Scott knew she’d either break even or lose money on her tour before a pandemic muddled her plans: all the money she had with her at the time was earmarked for accommodations and travel. Much of it couldn’t be refunded and was lost amid the tour cancellation.

“I want to find a way as a live performer to create something that’s just as touching and artistically fulfilling as playing a show.”

Now that touring musicians are stuck at home, they’re finding virtual ways to be creative to fill the void. Willie Nelson, Jewel, Lucinda Williams, and dozens of other acts shared a virtual festival bill in a livestream on Facebook, while Dropkick Murphys livestreamed their annual St. Patrick’s Day concert from Boston. Some musicians, like Death Cab for Cutie frontman Ben Gibbard, are simply performing for entertainment and community; others request donations from viewers.

Leanne Greyerbiehl of indie pop act Lou Canon is already working on her next music video — one that’s fully in line with today’s social distancing guidelines. “I ultimately sent out an email message to my community and my friends and my fans asking for video footage of them writing lyrics on different parts of their body, and people who wanted to be part of it got a line of the song,” Greyerbiehl says. “Now we’re working on this video where no one has to see each other [and] everything’s just being shared online: it’s kind of doing the best to continue to produce and get things done and feel connected to the community.”

As the world comes together to support artists, companies and organizations are doing their part, too. The music platform Bandcamp has pledged to give all proceeds for purchases made on March 20 directly to bands and reported $4.3 million in revenue on that day alone; individual labels have followed suit, either lowering their revenue share or waiving it entirely to support their acts. The Recording Academy’s nonprofit arm MusiCares has launched a COVID-19 Relief Fund.

“Sometimes, when I am locked up in my own feelings about [income] or fears about it, I have to be like, as a business, what do I do? In a digital space, how are we going to stand out?” Pom Pom Squad’s Berrin says. “I want to find a way as a live performer to create something that’s just as touching and artistically fulfilling as playing a show that can also be consumed by anyone, anywhere.”

More like this
Eurovision Has Been Given A Whole New Look Ahead Of Its Liverpool Debut
By Bustle UK
Taylor Lautner Thought Taylor Swift's 2009 VMAs Interruption Was A "Skit"
By Alyssa Lapid
Will Beyoncé Perform At Or Attend The 2023 Grammys?
By Jake Viswanath
Taylor Swift May Miss The 2023 Grammys For Reasons Fans Know “All Too Well”
By Jake Viswanath
Get Even More From Bustle — Sign Up For The Newsletter
From hair trends to relationship advice, our daily newsletter has everything you need to sound like a person who’s on TikTok, even if you aren’t.