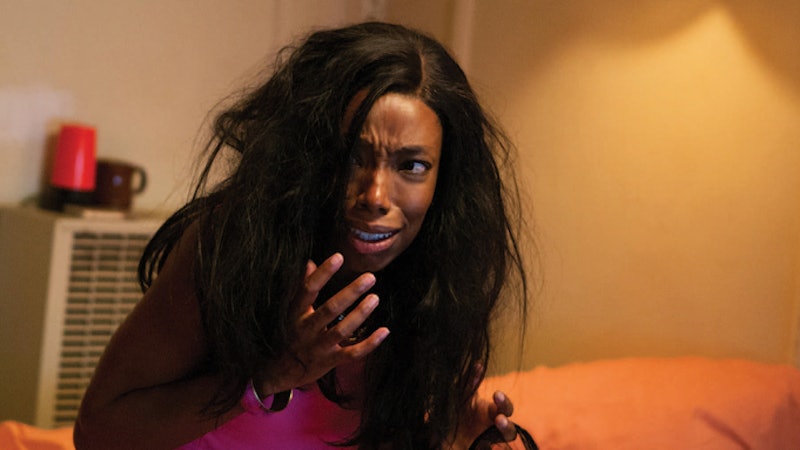 It's Halloween season, which means it's a time for your favorite horror villains to return to the screen. But you've never seen a villain quite like the one in the new Hulu original film Bad Hair. The satirical horror movie features an evil weave as its antagonist, which goes on a murderous rampage after it's affixed to the head of an ambitious young Black woman who's trying to fit into the physical ideal of 1980s American society.

The film comes from writer/director Justin Simien, who was the force behind 2014's Dear White People. That acclaimed comedy was lauded for starting a conversation about race and for showing the ways in which white people can be racist without realizing it. Bad Hair is looking to do something similar — albeit in a different genre — by examining how Black people have been forced to adapt to a society that wasn't made with them in mind. "I think the movie is kind of asking us, ‘OK, well let’s take the things that feel like they’re about celebrating us, but make sure that we understand what it’s really saying and where it’s really taking us,’" Simien told The Houston Chronicle. "Because this world wasn’t made by us ... it wasn’t made with us in mind. It’s not always for us. It’s not always for our benefit."

To find out about Bad Hair's plot, reviews, and how scary it is, read on.

What Bad Hair Is About

The film takes place in 1989 and follows Anna (Elle Lorraine), an aspiring VJ at a Black music video TV network. Ever since a traumatic experience with hair relaxer as a child, Anna has kept her hair natural. But when she's informed by her new light-skinned, straight-haired boss that she'll need to change up her look to a more white-friendly appearance to get ahead at the network, she reluctantly gets a weave. The weave turns out to be no ordinary hairpiece; it's cursed and possessed by an evil force. And when the weave starts killing people, it makes for a not-so-subtle metaphor of the harm that white beauty standards can cause Black women.

What Critics Are Saying About Bad Hair

Reviews for Bad Hair have been decidedly mixed, but fall more on the positive than negative side. As of this writing, Rotten Tomatoes gives it a score of 62% after 34 reviews — just barely over the site's "fresh" threshold. Metacritic gives the film a slightly better rating of 65 after 12 reviews, which suggests "generally favorable reviews." Overall, most critics seem to praise the film's themes and performances but feel that it could stand to be a little shorter and would benefit from better pacing.

How Scary Is Bad Hair?

Bad Hair is not a straight-up horror movie. This is not going to give you nightmares the way that something like The Exorcist might. It's a horror-comedy that's satirizing a specific aspect of culture, which immediately sets it apart from most other examples of the genre. But that's not to say there are no scares at all. Simien set out to emulate such iconic horror films as Rosemary's Baby, Invasion of the Body Snatchers, and The Wicker Man, according to RogerEbert.com. Those are some scary movies, and you should go into Bad Hair expecting to be frightened by at least a couple of scenes.

More like this
Pamela Anderson’s Dating & Marriage History Could Be Its Own TV Series
By Jake Viswanath
Pamela Anderson's Sons Brandon & Dylan Have Their Own Hollywood Careers
By Arya Roshanian
Wait, Is Barney Stinson Related To Sophie On 'HIMYF'?
By Gretchen Smail
Stephen Graham & Steve McQueen Are Working On A Wartime Drama
By Darshita Goyal
Get Even More From Bustle — Sign Up For The Newsletter
From hair trends to relationship advice, our daily newsletter has everything you need to sound like a person who’s on TikTok, even if you aren’t.