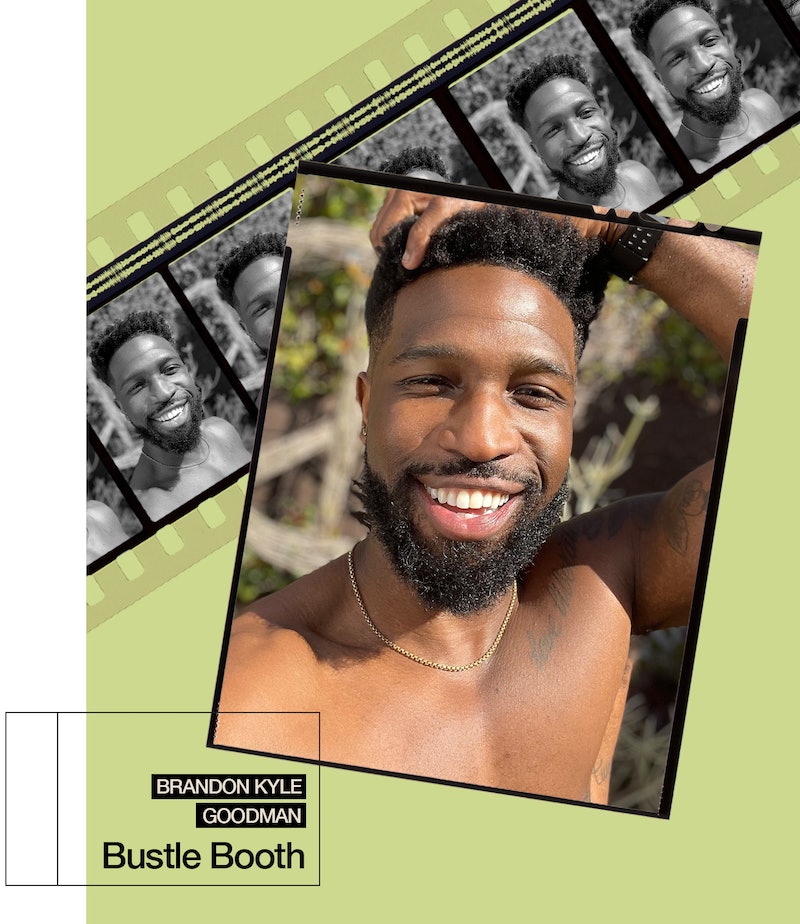 For Brandon Kyle Goodman, performing always felt like a natural extension of the self. Goodman comes from a long line of performers: Their grandmother was a minister; their mother was an actor. Goodman got started the usual way — in high school plays, then studying acting at NYU, plus doing some sketch comedy (an attempt at standup didn’t quite stick). But something shifted when they started writing their own material.

“One of [the] biggest things my mother told me was to write and write for yourself. As a dark-skinned Black woman from Trinidad acting in the ‘90s and early 2000s, there wasn't a space that really honored her talent and her ability,” Goodman tells Bustle. “Her saving grace was she was able to write for herself. Her HBO special came off the back of her own writing.”

It was through lots of journaling and writing that Goodman developed the character of Latrell, a queer, femme, Wendy Williams-style talk show host. As a Black, queer, nonbinary actor, playing a radical character they wrote onstage gave Goodman the freedom to honor their own lived experiences rather than wait to see them reflected in a role. “If you’re waiting for Hollywood to make those parts, you’re going to be waiting for a while,” Goodman says.

Soon, their writing started to open doors. Goodman booked parts on shows like Alive in Denver, Modern Love, and Curb Your Enthusiasm, all while watching The Latrell Show grow in popularity. They joined the cast in Season 4 of Big Mouth as both a writer and an actor, garnering even more acclaim for their nuanced depictions of the show's queer storylines.

Around the same time, Goodman’s work as an advocate began to gain steam, too. After speaking out on Instagram in 2020 about racial justice and raising awareness for groups like BLM and the Black Trans Travel Fund, Goodman developed a base of supporters interested in both their activism and creative work. Now, Goodman is combining the two in the form of a memoir called You Gotta Be You, in which they explore the intersections of their own race, sexuality, and gender.

Goodman is also keeping plenty busy in the extended Big Mouth cinematic universe, voicing Walter on Netflix’s Human Resources. The Big Mouth spinoff is set in the corporate headquarters of hormone monsters, giving context for how they came to rule human emotions. “It’s a new world,” says Goodman. And it’s one that Goodman is proud to have had a hand in creating.

Get to know more about Goodman in the Bustle Booth below.

Tequila soda. Coffee? I don't know her. But I do drink a gallon of water a day. It's not a brag cuz I am peeing constantly, and I don't wish that continuous race to the bathroom on anyone. BUT the skin is poppin’!

"You think because I'm a movie star, I don't have feelings. Well, you're wrong, I'm an actress. I've got all of them." This line delivered impeccably by thee Goldie Hawn in First Wives Club was a queer awakening for me. Suddenly my little 9-year-old self wanted a custom-fitted white pantsuit and money. A gay was born.

That's hard, there were so many, but 101 Dalmatians was everything to me, particularly Rolly the always hungry puppy who was asking about when they were gonna eat, in the middle of being rescued. Priorities, honey! Rolly has them!

Euphoria! Gobsmacked every week by the writing, performances, cinematography, direction, design. Just everything. In an age where attention spans are shorter and I find myself always doing a million things at once, it's magical to experience something that enraptures me and holds a grip so tightly. Literally hanging on every frame, every syllable, every breath. What a gift to experience art that cracks you open like that.

Oprah. Periodt. Growing up the other kids came home and watched Power Rangers, while I was like, “The Oprah Winfrey Show, please!” Celebrity guests, trauma unpacking, and extravagant gift giveaways? Yes, please!

The Kardashians because I feel like I wouldn't have to get involved in any drama since I'm not part of the family. I could just go on the trips, eat at the restaurants, shop at the stores, and quietly nod along. The stakes would be low and the luxury high. I love that for me.

Karaoke gives me anxiety. You'll find me in the corner sipping a margarita and doing my meditative breathing exercises. I don't know why, but watching people drunkenly belt Celine Dion off-key puts me in a fetal position.