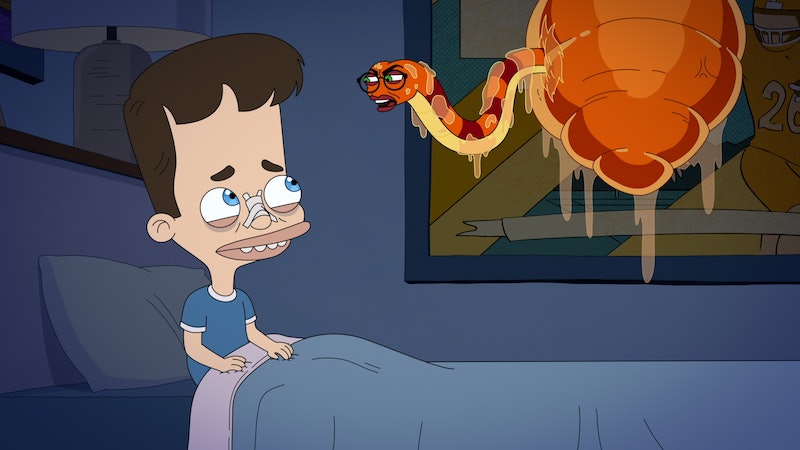 From his horndog Hormone Monster to the incessant Anxiety Mosquito, Nick (Nick Kroll) has been plagued by plenty of fantastical creatures on Big Mouth. And Season 5 will introduce yet another one to the fold: Walter the lovebug, voiced by Brandon Kyle Goodman.

According to a press release, Walter initially encourages Nick to pursue his romantic feelings for Jessi (Jessi Klein). But when she publicly rejects him, Walter transforms into a hate worm, sending Nick down a darker, more antagonistic path. His introduction — along with lovebug/hate worms for the other teens in the show — is meant to plant the seeds for Big Mouth’s forthcoming spinoff Human Resources, which is set in the workplace of the Hormone Monsters and will bring viewers further inside the world of Big Mouth’s anthropomorphic beings. Goodman is among those set to star in the new series.

Fans may recognize the non-binary actor — who uses he or they pronouns — from their turns in shows like Alive In Denver, Modern Love, and Curb Your Enthusiasm or the 2020 dance film Feel the Beat. However, Big Mouth is one of their biggest roles to date. Goodman actually started on the series as a writer in Season 4, describing their writing style to Sharp Magazine as “ honest, authentic, passionate, funny, and empathic.” In fact, Goodman sees empathy as the driving engine of Big Mouth and credits the show’s creators for bringing together a team of writers who are both kind and open.

“Funny is not cute if you’re an assh*le, right?” they told the outlet. “Because we’re tackling anxiety or shame or coming out or Blackness, you want to be in a room with people who are empathic, who can hold space for these deeply personal stories that we as writers are gonna share with each other, and hold it sacred.”

Though Big Mouth contains a lot of crude, outrageous humor, it’s grounded in genuine stories about identity and coming of age. To Goodman, that balance is key. “All these things that are really heavy and important ... I think people are able to receive it because of the comedy,” they told Sharp. “What I love about [the show is that] no matter how vulgar or crass or explicit it is, there’s also so much heart in it.”

It’s an affirming feeling for Goodman, who remembers being at a tough place in their career only a few years ago. Growing up with a minister grandmother and an actress mother, Goodman “was always in the theatre, always kind of in the space of performance,” they told Sharp. After doing plays in high school, they studied acting at NYU. But after several years in the industry, the pressure began to weigh on them. “I expected my career to pay my bills, feed me, clothe me, satisfy my need to make art, fulfill my dreams of fame, buy me a house, take me around the world, give me power, acceptance, validation, celebration,” Goodman wrote in an essay for Backstage in 2020. “When it wasn’t doing any of those things, I was bitter, resentful, miserable. My misery kept me in a cage unable to see my life.”

Around late 2018, Goodman had an epiphany. “I found myself sitting at my dining room table at two in the morning, weeping. Not crying, honey, weeping. Sobbing,” they wrote for Backstage. “[It] was brought on by the realization that I was in an abusive relationship with my career. And I was the abuser.”

After that, Goodman stopped putting so much pressure on productivity and work and instead embraced only the things that made them happy. Things clicked from there. “It’s cheesy, but get about the business of learning how to love yourself and the rest will fall into place,” they wrote.