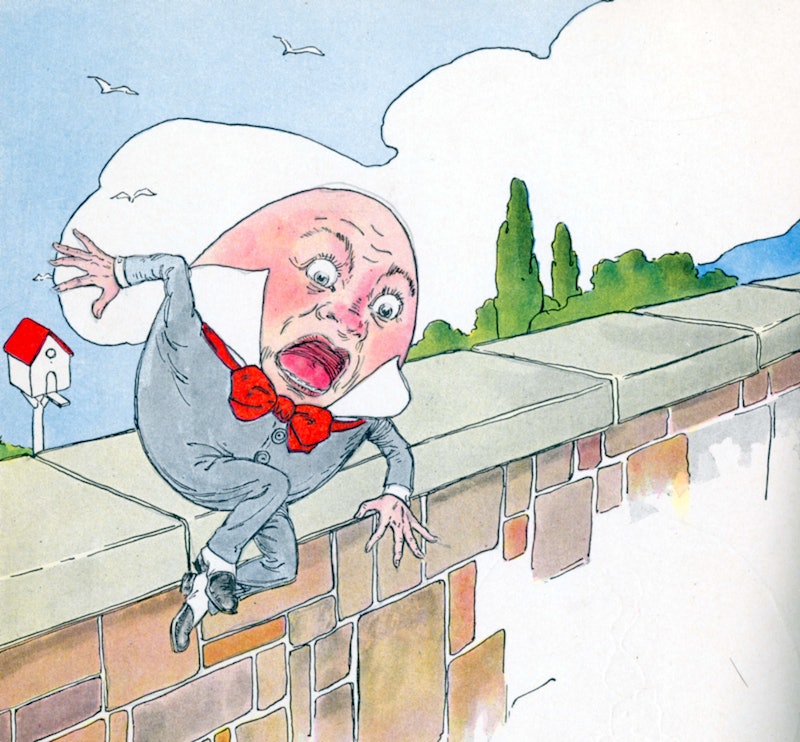 Every now and again, somebody will pose a seemingly simple observation that ends up throwing something we all took for granted into endless doubt. Take this as an example: for hundreds of years, we have willingly accepted the reality that Humpty Dumpty – the protagonist of a popular children’s nursery rhyme – is an anthropomorphic egg. Well, prepare to have your mind blown…

“Who decided Humpty Dumpty was an egg?” asked bestselling author Holly Bourne on Twitter. “It's not in the lyrics, and deciding he's a giant egg is quite a random leap for someone to make, and everyone else being like, ‘yeah, a giant egg on a wall. Of course.’”

It’s a fair point. Though Humpty is nearly always depicted as an egg – usually one wearing a pair of high waisted booty shorts for some bizarre reason – his appearance or form is never actually mentioned in the original nursery rhyme. Instead, the lines make a kind of riddle to be answered. It’s Alice in Wonderland author Lewis Carroll who first suggested that the answer could be “an egg”, and he ran with the theory throughout Through The Looking Glass, illustrating Humpty as an egg with human features. As several users point out, this is probably where the association comes from.

So, if Lewis Carroll got it all wrong, what is Humpty’s deal? Well, some reckon that it was a nickname given to a large cannon in Colchester which fell off a wall and smashed to pieces. Colchester tourist board has enthusiastically embraced the idea, but admittedly it might not be true: a spoof article for an Oxford University magazine in the ‘50s put forward the same theory about Humpty being a cannon from Gloucester.

Some respondents to the tweet also pointed out that Humpty Dumpty could also be King Richard III – depicted in a Shakespeare play as "a poisonous hump-backed toad.” Others pointed out that “humpty dumpty” is a 17th century slang term for "ale boiled with brandy” – meaning that old Humpty could also be a clumsy person who came a-cropper after a couple too many goblets.

Life will never be the same again.